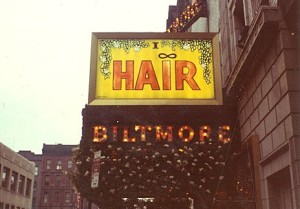 Forty years ago today, April 29, 1968, the musical Hair debuted on Broadway and basically changed New York’s theater industry — where shows come from, how they’re staged, what you can even doon stage.

Here’s ten reasons why Broadway’s first rock musical is so important, and why today you should probably fish out your Fifth Dimension CD or original cast album in tribute to this one of a kind groovy show:

1) Hair made the Public Theater. The show made its debut on October 17, 1967 at the Public, which was itself making its debut. In fact, the theater in which is was being performed — in the former Astor Library — wasn’t even finished yet! The Public Theater would have course to go on to become off-Broadway’s leading theatrical producer.

2) After six weeks, Hair would foreshadow Studio 54’s own transformation into a Broadway house by moving the remainder of its off-Broadway run into the Cheetah discotheque.

3) Hair is the very first musical to be transferred from off-Broadway. At the time an extremely risky proposition, it’s today considered a logical move for the most critically popular of shows. Rent, Avenue Q and Spring Awakening — like Hair, all off-center shows with sexuality and rebellion at their core — also made the jump to the big stage and all won Tonys for Best Musical.

4) Hair brings Tom O’Horgan to Broadway. A regular at the off-off-Broadway La Mama — the East Village’s most venerated experimental theater — O’Horgan brought an uncompromising edge to his staging that was entirely shocking to mainstream theatrical audiences. O’Horgan would stay on Broadway throughout the 70s with pivotal work in Jesus Christ Superstar, Futz!, and Lenny.

5) Hair doubles the number of songs ‘allowed’ in a musical. The sheer number of songs in Broadway restaging made it unique, over thirty. The big musical from the previous year, Cabaret, barely featured half that number

6) O’Horgan also brings the nudity. The uptown redux features one of the most influential scenes in all of Broadway history — at the end of the first act, when the entire cast, in low lights, appear completely unclothed, the first stage nudity to hit the Great White Way. 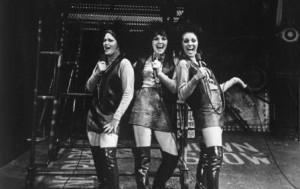 7) A New York icon debuts. Diane Keaton (above, in the middle) becomes an understudy in the show but refuses to do the nude scenes. After several months with the cast, Keaton goes on to her next show — Play It Again, Sam — where she makes the acquaintance of a young director, Woody Allen.

8) Up for two awards (Best Director and Best Musical) at the 1969 Tony Awards, it lost both to the musical 1776. Interestingly, Diane Keaton is up for her Tony that year for Play It Again Sam and also lost.

Here’s about a comprehensive list of some of Hair ‘s original review. Both the New York Post and the New York Times gives the original off-Broadway production a condescendingly mixed review.

The Village Voice? Hated it. “As for Hair, I loathed and despised it. Described as ‘an American tribal love-rock musical’ it turned out to be all phony.” Wow, some things never change!

We’ll see how the critics like it this summer when the Public Theatre restages Hair for its Shakespeare In The Park program at Delacorte Theatre, from July 22 to August 17. Diane Keaton won’t be in it, but will there be nudity?

2 replies on “When Jupiter aligned with Mars: Hair on Broadway”

Has anyone heard how they ruined the music? I went to the website to get the tickets for a group of us…is bad…really bad. They murdered it. There is a fake drum disco sound and
its sung like American Idol. I am so disappointed. Is nothing sacred? I understand they wanted to make it fresh but..whew, its pretty bad.

Not sure who will ever see this, but The Golden Apple was the first show to transfer from off-Broadway to Broadway. Same scenario: producing org (in this case the Phoenix) scores a hit off-B and gambles uptown. Hair won, The Golden Apple didn’t.