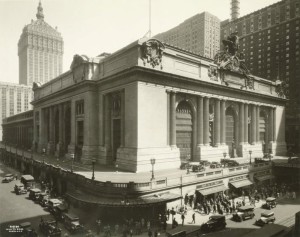 1) Grand Central Terminal
The Grand Central Depot was first built at 42nd Street in 1871 as a hub for Cornelius Vanderbilt’s railroad operations. It was greatly expanded at the turn of the century. and by this time, the tracks headed north were electrified and buried, creating Park Avenue.

The present terminal was conceived in 1903 by two teams of architects and took a decade to construct. Meanwhile, the tracks heading north, now sunken and electrified, were covered with a new street and its air rights sold to become Park Avenue.

The ne plus ultra of Beaux-Arts New York opened in February 1, 1913, and its first train, the Boston Express, left the station two days later.

For more information, listen to our podcast on Grand Central Terminal (Episode #45) 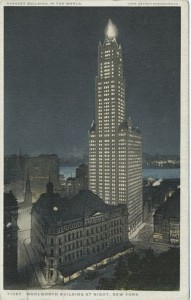 2) Woolworth Building
The Woolworth Building and the current One World Trade Center are separated by a couple blocks — and one century. Just as New Yorkers marveled last year at what will be the city’s tallest building as it began to tower over downtown Manhattan, so too did the New Yorkers of 1912, at the ornate Cass Gilbert structure rising near City Hall. In January of 1912, newspapers were already proclaiming Woolworth the crown of “:the world’s greatest construction era.”

One World Trade Center will open later in 2013. The Woolworth opened on April 24, 1913 as New York’s tallest building until 1930. As you can tell from the 1910s postcard above, it rose next to the garish old New York Post Office at the foot of City Hall Park.

For more information, listen to our podcast on the Woolworth Building (Episode #76) 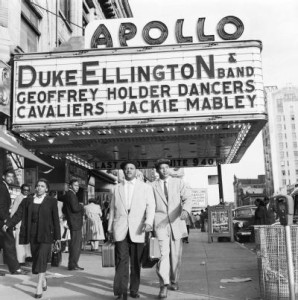 3) The Apollo Theatre
The theater that eventually became one of America’s top spotlight for new entertainers was constructed in 1913 — its architect, George Keister, designed many great theaters of the day, including the Belasco — and quickly became a home for Harlem burlesque acts under the name Hurtig and Seamon’s New Burlesque Theater.  While far from Times Square’s Broadway district, its stage has actually outlasted most of the theaters there.

It reopened in 1933 as the 125th Street Apollo Theater. It was around this time that the doors were opened to African-American entertainers.  Its ‘amateur nights’ would soon become world-famous for discovering major talent.

For more information, listen to our podcast on the Apollo Theatre (Episode #15) 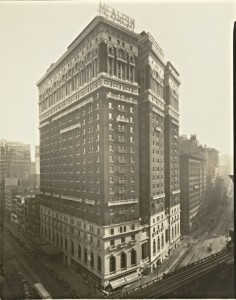 4) Hotel McAlpin
New Yorkers got a look at Herald Square’s Hotel McAlpin — the tallest hotel in the world at the time — in a lavish open house on December 29, 1912.  Thousands marveled at its almost absurd size, suitable for 2,500 guests and 1,500 employees.  It was ready to welcome guests with the new year.

“The McAlpin has many features peculiar to it among hotels,” proclaimed the New York Times. “For one thing there is a woman’s floor to which no men are permitted and where even the clerks are women …The twenty-second floor is devoted exclusively to men.” And the 16th floor was known as the ‘Sleepy Sixteenth’, the silent floor.

Today the Hotel McAlpin is an apartment complex, the Herald Towers.

For more information, listen to our last podcast on the history of Herald Square (Episode #146)

Note: I don’t think the McAlpin is officially landmarked, only one in the historical sense.