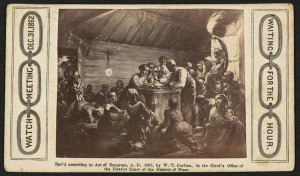 In black churches throughout America 150 years ago, gatherers celebrated ‘Watch Night’ on December 21, 1862, counting down to the moment when Abraham Lincoln’s Emancipation Proclamation would take effect. The carte-de-visite above celebrates a watch night that took place in Boston. [LOC]

The following text is taken from the New York Tribune on January 1, 1863. (You can read the entire issue here.) With the North in the terrible throes of war, most of the issue is filled with battle reports.  New York City celebrations of the new year were most likely muted, with possible exception of a few saloons celebrating some odd-timed primary elections for various Tammany Hall job functions.

But for a great many, midnight brought in more than just a new year.  That day was significant for another reason.  President Abraham Lincoln’s executive order, the Emancipation Proclamation, freeing the slaves in Confederate territories, took effect on January 1.

I’m reprinting the Daily Tribune’s notice in full, both the significant and trivial portions, to give you a full sense of how the news was received, in this case, by the pro-Lincoln paper owned by Horace Greeley (over three decades before Mr. Greeley was immortalized in statuary in Herald Square). It’s a celebration of a true historical event and the pursuit of freedom, with a snide insult lobbed at ‘the low-born and vulgar [who] fear the competition of the negroes’.

Here’s the original article, with excerpts from the text below it.

A Happy New Year — Another New Year has dawned upon us, bringing tokens of love and friendship and pleasant congratulations. Have we realized the hopes of those who were so lavish with their good wishes one year ago, and enjoyed uninterrupted happiness?

We have reached another way-mark on the road of life, and if we pause a moment and look back upon the past, we shall see here and there the green mounds of some who exchanged with us the compliments of the season twelve months ago. But this is not the time for sadness, even though the cold shadow has fallen upon our healths and upon our hearts.

Thousands of visitors today will leave their photographs with their lady friends, if they would have the world (their world) believe that they are not so deficient in noble emotions as a carte de visite*, they will show respect for themselves by respecting the rights of others whatever may be their creed or complexion.

If President Lincoln today makes himself immortal in history by lifting up the downtrodden slave, so that while his feet stand upon broken fetters — his heart shall beat in the air of freedom — they should approve the deed, and hail the day as a happy one to four millions of human beings disenthralled**.  If the low-born and vulgar fear the competition of negroes and mistrust their capacity to cope with them in the common affairs of life, let not those who claim to be gentlemen begrudge the boon of happiness to the humblest of the human race.***

Today we commence a new era in our history. Slavery is abolished. The backbone of the Rebellion is broken, and long before another New Year’s morning shall break up us the war will be over — Liberty will triumph — Peace will be established in all our borders, and the sword and shield of Justice shall be our defense in the face of all the nations.****

We shall mourn the loss of many who have fallen and who will fall in battle, but those who dare fight for their country can afford to die; their lives have not failed to produce good works.   If we honor those who fell at Antietam and Fredericksburg and on other battlefields, let us show ourselves worthy to wear their mantles.

*Small likenesses  — essentially trading cards of yourself — called carte de visite were especially trendy during the Civil War, both as a novelty and as a way of remembering those at war.

**The Proclamation could only be enforced in rebel territory under Northern control, so not all of the four million enslaved men felt its benefits on this date.

***Referencing fears of new immigrants that freed blacks would become a competitive labor force. These fears would, of course, culminate later that summer in the Civil War Draft Riots.

****Of course, we know now that the war would drag on for over two more years.