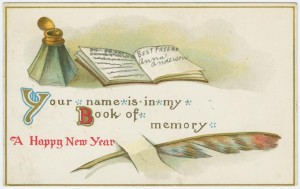 Above: A curious New Years postcard from 1913

Here’s the list of our fifteen podcasts released in 2012, running the gamut from New York City’s most popular landmarks to a look at some of the infrastructure that keeps the city running.

History is but a story with an unwritten ending. Two of our subjects this year — the neighborhoods of Rockaway Beach and Red Hook — experienced course-altering devastation that continues to this day due to Hurricane Sandy. Those neighborhoods are rebuilding but some areas will never be the same again.

In this year’s shows, we spent time with tortured genius like Nikola Tesla and Samuel Morse, visited west side abattoirs, midtown’s Trappist monastery and a few Bushwick breweries, imagined Edwin Booth‘s final performance, and one of Patti Smith‘s first, in a basement a few feet away from the body of Peter Stuyvesant.

We talked about New Yorkers who changed the course of rivers, sent radio signals for the very first time, broke social conventions to ride on two wheels and debunked magic at Carnegie Hall. While Rockaway Beach was experiencing the biggest hotel flop in history, men gathered to ogle the can-can dancers at the Haymarket in Herald Square.  And in midtown Manhattan, an icon takes its sweet time rising to become New York City’s most famous church.

We also introduced you to a couple walking tours of New York City and hopefully there will be a few more completed in 2013.

The two most popular shows of the year, based on downloads, were St. Patrick’s Cathedral and New York Beer History. My personal favorite? Probably NYC and the World of Radio. It’s got music in it!

We both thank you all for listening in this year. Tom and I really could not do this without your love of New York City history, your enthusiasm and your feedback. And I’m telling you now — 2013 will be our biggest year yet, with a lot of new projects and of course many more new podcasts.

Happy New Year! Here’s the year in review. You can download all of these from iTunes, all free (except the Washington Square Park walking tour). You can also get them directly from our Libsyn page by clicking the links below:

#133 Red Hook: Brooklyn On The Waterfront
Red Hook, Brooklyn: A rich seafaring history, organized crime and the isolation of a beleaguered neighborhood

#135 The High Line
The High Line: The wild, wild West Side, cowboys included, inspires an elevated railroad and a remarkable park

#145 Bicycle Mania: From Velocipede to Ten Speed
Bicycle Mania! The story of New York on two wheels, from velocipedes to ten-speeds — with women’s liberation in tow

#146 Herald Square
A whirlwind tour of Herald Square: More than just Macy’s, the intersection of publishing, theater and debauchery

In addition, I also released a short show during the week of Hurricane Sandy, recounting the events as they had occurred that week. It was released just a few hours before midtown Manhattan returned to power, so it makes an interesting time capsule of the events.