Joel Sternfeld’s extraordinary four-seasons photographs of the High Line — displayed in his 2002 show Walking The High Line — revealed a ribbon of nature surrounded by urbanity and presented a peek into forgotten history. These images greatly influenced the later design of the park, a mix of seamless design and tastefully untethered flora. Courtesy Joel Sternfeld

PODCAST  The High Line, which snakes up New York’s west side, is an ambitious park project refitting abandoned elevated train lines into a breathtaking contemporary park. This is the remnant of a raised freight-delivery track system that supported New York’s thriving meat, produce and refrigeration industries that have defined the city’s western edges.

You can trace the footprints of this area back almost 200 years, to the introduction of the Hudson River Railroad and Cornelius Vanderbilt, who transformed the streets along the Hudson River into ‘the lifeline of New York’, filled with warehouses, marketplaces and abattoirs. And, of course, lots of traffic, turning 10th Avenue and 11th Avenue into ‘death avenues’, requiring New York’s first ‘urban cowboys’.  The West Side Elevated Freight Railroad was meant to relieve some of trauma on the street. That’s not exactly how it worked out.

We’ll tell you about its downfall, its transformation during the 70s as a haven for counter-culture, and its reinterpretation as an innovative urban playground.

St. John’s Freight Depot, built in 1871. The Cornelius Vanderbilt statue stood watch over the bustling activity until the building was demolished in the 1930s. Mr. Vanderbilt was then moved to Grand Central Terminal, where he still stands today. Pictures courtesy NYPL digital images 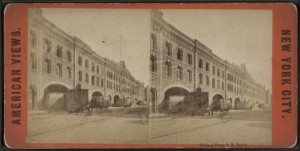 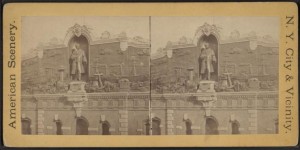 The businesses, the trains and the marketplaces of the west side created a nightmare traffic situation along 10th and 11th Avenues, resulting in dozens of death and the sinister moniker ‘Death Avenue’. (Picture courtesy Friends of the High Line) 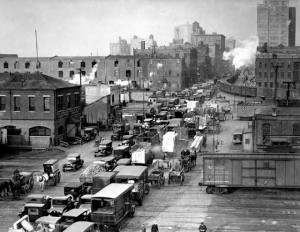 Rangers of Eleventh Avenue: A railroad cowboy marches ahead of an approaching train. Below that, many years later, another cowboy has his work cut out for him going up the avenue in 1922, the era of automobiles. 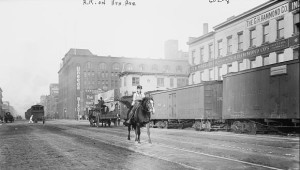 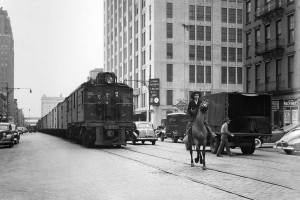 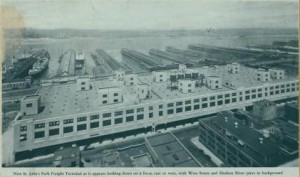 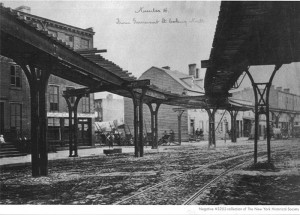 The elevated in 1934, West Street and Spring Street. This was one of the sections that was later ripped down. (Courtesy NYPL) 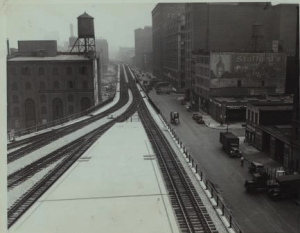 After the elevated railroad closed for good in 1980, the track sat abandoned, covered in natural overgrowth of the likes hardly seen anywhere else in Manhattan. ‘Urban explorers’ often traipsed along the mysterious rails, capturing the dichotomy between sudden natural landscape and metropolitan backdrop. (Photo courtesy wally g/Flickr) 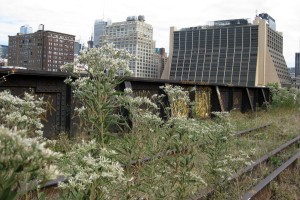 The High Line Park opened in 2009, after almost a decade of awareness and fundraising. The linear park has helped transform the neighborhoods below it and has created a new must-see destination for tourists. (Courtesy Friends of the High Line) 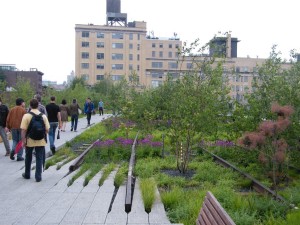 12 replies on “The High Line: The wild, wild West Side, cowboys included, inspires an elevated railroad and a remarkable park”

I believe it’s a 1934 photo celebrating the last street-level train before the High line was opened. There are other photos in that series that show this same cowboy with the new High Line in the back.

And now, it’s essentially a semi-private playground for the snobbish, monied interloping staycationing refugees from flyover states. There was more character in the area when it was still dangerous to walk through at night. I sure miss the good old bad days.

As someone who grew in the far west village I can tell you I am far happier with today’s treatment of the area. I’m not sure who really wants to live in a ghetto, or in fact were you one of those who were just ‘slumming’ it in the Village but now are yourself so snobbish you still think you’re better than anyone else? No, lawlessness is not befitting of such a beautiful and great area.

Great podcast, as usual. That first photograph of the overgrown High Line has long mystified me. It seems too far north to be facing south and it couldn’t be facing north with the image reversed (so that the Empire State Building appears on the wrong side) because the wording in the advertisements is not backwards. I walked the length of the High Line this afternoon and finally figured out that it’s facing east on an adjoining track over 30th Street and eventually leads directly into the side of a brick building. I think what fooled me is that it looks like a longer stretch in the photo than it really is.

I found the northern end, where it used to go into the postoffice at 30 street interesting, how they just bricked up the space where the trains used to enter.

Are we sure the Gansevoort image is the high-line in its early stages, or am I reading this incorrectly? I know there was an early elevated passenger train up Hudson and the supports look similar to this in my opinion. It would have run towards Gansevoort, although I’m not sure if it was built that far north…

I agree- the High Line had much more a substantial steel frame running across the top. I suspect this is the 9th Avenue El.

Here’s a photo of the High Line from above and below, so you can see the level of steel construction. http://graphics8.nytimes.com/images/2006/02/05/nyregion/thecity/05high_lg.jpg

I admit, the picture confuses me too, and it may be an image of Harvey’s old elevated railroad. (The photo certainly looks older.) However it was labeled in more than one place as the beginnings of the freight line. I’ll see if I can find more information about it…

The Gansevoort image is of the first elevated railway in New York, 1870. No relation to the High Line. It was rebuilt into the 9th Ave El which was closed in 1940.

[…] The Bowery Boys: Ok this one is not an easy one to convince people to listen to. Every episode goes through a history lesson on New York, topics like Central Park, the Subway, Times Square. Sometimes topics like The Crash of â€™29, NY and the Golden Age of Television, or The Lower East Side: A Culinary History. In the beginning, episodes were only 20-30 minutes long, and now theyâ€™re at an hour mark, which I find a little too daunting for newcomers. I generally hate learning history, but Iâ€™m fascinated when they link events to the way things are now. For instance, DID YOU KNOW the NYC grid has wider avenues closer to the water, because this was where most commerce occurred back in the 1800s, since at the time, the main mode of transit was ships. Or DID YOU KNOW that the builders of the first NY apartment building purposely and carefully selected their tenants to be interesting and stable, so the idea of living in an apartment would be an appealing idea for the wealthy. The most impressive thing is that it seems the two hosts, Tom Meyers and Greg Young, research separately and come together, and somehow they never overlap or talk over each other when they record. Itâ€™s like a well-orchestrated dance of facts! Suggested Episode: #135: The High Line […]