The Irish were the first to immigrate to this country en masse in the 1840s, only to find themselves near the bottom of almost every aspect of American life. In James R. Burnett‘s tidy and studied cultural history ‘The Irish Way: Becoming American In The Multi-Ethnic City‘, we found out how they fought their way into American life, transforming it, and paving the way for others.

Burnett, a professor from the University of Illinois at Urbana-Champaign, explores the Irish influence on American life via the collisions and conflicts which occurred between the new arrivals and nativists, and the new arrivals and the newer arrivals. A profound theme of the book is that the definition of being American Irish came not from seclusion that would define later immigrant groups, but from clashes with those groups. By the 20th century, Irish influence came from their successful entry into American life and, according to Burnett, “in strategies for dealing with newcomers.” 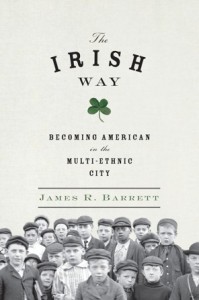 The book is categorized into various aspects of modernity as it would have looked to a late 19th century immigrant — The Streets, The Parish, The Workplace, The Machine. Although it purports to be a survey of American Irish urban life, it’s almost wholly based on the New York Irish experience. And for good reason; by the turn of the century, more people of Irish descent lived here than in Dublin.

Many aspects of modern life trace back to more robust strains of Irish defiance. The Catholic Church may have been a powerful organizer of the Irish community, but the many Irish social reformers who pushed against it (even those among the clergy itself) helped fashion modern social reform. The roots of union organizing came from Ireland. And, with nods to the likes of “Big Tim” Sullivan, the modern political machine was essentially fueled by powerful collaborations with Irish community leaders.

If early Irish New Yorkers strived for assimilation, later generations defined their ethnicity against the grain, combating black, Italian and other immigrants in alleyways and along the docks — for territory, for jobs, for identity. The Irish dominated the worlds of minstrelsy and vaudeville. Victimized by horrid stereotypes, Irish entertainers turned the tables with equally vulgar presentations of groups they often considered beneath them. (Those tables could be turned again; as Irish entertainers often did ‘yellowface’, so too could a Chinese entertainer do a broad Irish impression in those years.)

There are lovely details of New York life scattered throughout, from the birth of New York’s first black Catholic Church to the final foothold of Irish dock workers in the neighborhood of Chelsea. While Burnett spends little time amid the grit of early Irish neighborhoods, there are plenty of depictions of fisticuffs and riots to indulge your pugilistic impulse. While it does beautifully illustrate the roots of Irish American pride, ‘The Irish Way’ is not a manual but a map, a reflection upon their path to influence on life in the United States.

4 replies on “‘The Irish Way’ to becoming American: a hard-fought history of the dockworkers, the vaudevillians and the chambermaids”

Weren’t the Germans the first non-English-speaking ethnic group to emigrate to the US (or really, the colonies) en masse? Many people were worried in the late 1700s that German would end up being the lingua franca of the US.

Good question! There were indeed a lot of Germans in America by 1800 (comprising 8.6 percent of the entire population according to the link below), but they immigrated over the course of several decades and settled broadly through the colonies/states.

Whereas the Irish came, comparatively speaking, suddenly, massively and almost all at once, in the mid 1840s and over the next decade.

A very impactful burst of German immigration did occur in the 1850s.

Having Irish roots myself, I wonder if my great great grandparents spent much time in New York, and if so, how they struggled. Such an interesting time.

Appreciate your sharing your thoughts on the book!

If he arrived in the 1840s, he would have lived in the slums of the five points area. It was called the worst slum in the world and it was very harsh.