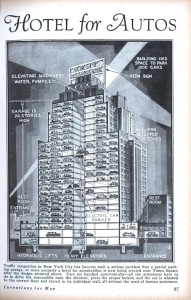 If you don’t already check in to the marvelous Modern Mechanix blog from time to time, then you’re missing out on some retro-futuristic genius. The blog usually highlights visionary drawings from the Modern Mechanics archives. But in the case of one illustration from May 1929, one particular wacky, wondrous dream was actually carried out — and promptly fizzled.

Automobiles had been a part of midtown Manhattan since the beginning of the 20th century, with dealerships lining the streets of the plaza that would soon take the name Times Square. But it wouldn’t be until the 1920s that the city recognized a crisis that would bedevil New Yorkers into today — where do you park your car?

Some cities outright banned curb parking during the decade. Chicago became the first city to charge motorists to park along city streets. But in New York, some private endeavors tried to solve the problem. 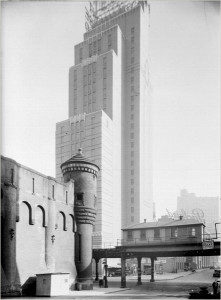 Perhaps seeing a bit of cross promotion, Packard Motors sold an area of property on Ninth Avenue and 61st Street (today’s 43-45 W. 61st Street) to the Kent Garage Investing Corporation in 1928. the brainchild by Westchester insurance salesman Milton A. Kent, the ambitious company opened a dizzying 25-floor* mechanical parking garage in a ‘flamboyant brick and terra-cotta’ art deco tower,  that could accomodate 1,000 cars, using an automatic elevator system that stored cars in upper floors. The cars were rolled into and out of elevators to desired slots in the structure, in theory using few human operators.  (See the clipping from the December 1928 issue of Popular Science at the bottom of this article.)

Advertisements touted the garage as a ‘motor hotel’. “Your car never touched by human hands!” went the Kent Garage slogan.

At right: The glamorous garage at West 61st Street, harkening a bit in appearance to the RCA Building, which would be completed in 1933. [source]

Kent Garages opened another location at 44th Street and 3rd Avenue and seemed to be the solution to the coming automobile boom that would fuel the ambitions of city planners like Robert Moses in the coming decade. Unfortunately, the Kent Garages were extremely inflexible, not suitable for cars of certain sizes, and employed highly defective machinery. And as you can probably gather, these were hardly swift forms of storage. It might take almost 30 minutes to retrieve your automobile during rush hour!

The garages were done in before they really got started thanks to the Great Depression. The Kents sold the 61st Street garage in 1931, although the building remained as a more conventional parking garage until 1943, when the building was refitted as a warehouse. (It’s an apartment building today.) 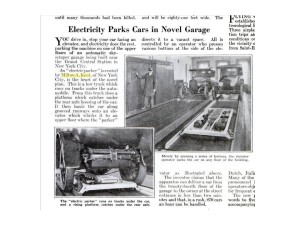 *Advertisements of the day tout a 25 floor structure, while the building’s landmark designation report lists a 24-floor building.