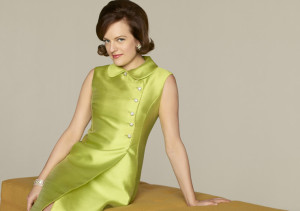 Our favorite randy, drunken Madison Avenue suits return this Sunday with an extra-special long episode of ‘Mad Men‘ this Sunday. As with prior seasons, I’ll try and follow up most shows on Monday with a little historical commentary.

The wonderful thing about this show is that they’re nothing if not hyper-sensitive about historical accuracy. From hints given by producers, it appears the new season will open sometime late in the year 1966 or perhaps early 1967. Some significant events during that year that may come into play on the show, either in major disruptive ways or in fine, knowing details:

— It’s the first year of the John Lindsay mayoral administration. Although he governs over a metropolis in steep financial crisis and paralyzed by striking workers, he still considers it a ‘fun city’.

— Pennsylvania Station is ceremoniously demolished. The fate of the treasured train station has been the subject of prior episodes. Could its final destruction represent something more for the troubled ad agency?

— The World Trade Center begins construction. I’ll be very surprised if some mention isn’t made of the envious offices with their magnificent views.

— New York’s most fabulous club is The Electric Circus on St. Mark’s Place, drawing the magnificent and the mod, including the entourage of former advertising illustrator Andy Warhol.

— This is the year of color and camp. New on TV: Star Trek, Batman, The Monkees, Dark Shadows

— In 1966, there 385,000 American troops in Vietnam, of which over 6,000 would be killed that year alone. A massive protest hit the streets of New York in April 1967 and dozens burned their draft cards in Central Park. A Maxwell House coffee can was famous used to burn the cards. A new client for Don Draper?

— Cassius Clay had fans last season at Sterling Cooper Draper Pryce. As Muhammad Ali, will he still have them after he becomes a conscientious objector against the war?

— The most important album of 1966 comes from two boys from Forest Hills, Queens — Paul Simon and Art Garfunkel. 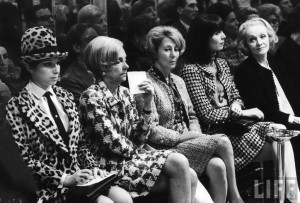 — New York played second-fiddle to the colorful imported fashion trends of London. Fashion became daring, flamboyant and colorful, even the dress suits. Skirt hems elevate. Pictured above: New York’s hottest star Barbra Streisand on one side, Marlene Dietrich the other, and the currency of 1966 fashion in between, at a Paris fashion show. Pic courtesy Life Google images

— Gay rights protests begin popping up around the Village, including a slightly botched ‘sip-in’ at Julius Bar in April of 1966. Might we see a reappearance of Sal in this context?

— New York gets its first FM rock music station in 1966 — WOR-FM. While I doubt this fact makes the show, expect a soundtrack heavily laced with sweat and reverb. (Or perhaps, laced with something more tangible?)

— On top of color televisions, potential clients for the agency include such newfangled inventions as disposable diaper, the synthetic fiber Kevlar, lawn replacement AstroTurf, the sugar substitute NutraSweet and any product related to the American quest to reach the moon.

Here’s a sampling of some articles I’ve written for the blog on ‘Mad Men’ episodes. You can find them all by clicking on the label ‘Mad Men‘: