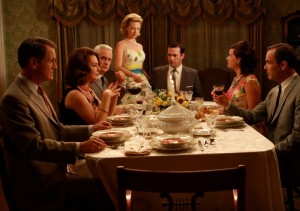 AMC’s ‘Mad Men’ returns for its fifth season this March. Until somebody goes ahead and develops a TV show about Peter Stuyvesant and New Amsterdam, the award-winning Madison Avenue drama is the closest we’ll get to straight-up New York City history TV. The writers cleverly embed the action within very specific 60s locations throughout the city. During the season I try and delve into those locations in our regular ‘Mad Men’ feature.


So what, then, to make of ‘The Unofficial Mad Men Cookbook: Inside The Kitchens, Bars and Restaurants of Mad Men’, by Judy Gelman and Peter Zheutlin? My first thought, naturally, was, “They eat on ‘Mad Men’?” They certainly flirt over dinners at times. Carla, the Draper’s housekeeper, tortures over hot meals that often get uneaten as Betty sulks and Don swallows down bourbon.

But ‘Mad Men’ is a show of lounges and restaurants, of decorum and indulgence, adrift in a rising stream of booze. It’s also a show of dizzying, if cynical, nostalgia. And that’s the secret of this fun little volume. The particular dishes featured in the book may have been seen or mentioned on the show. But the recipes themselves are straight from the kitchens of New York’s most famous eateries and from original 1960s magazines and cookbooks. 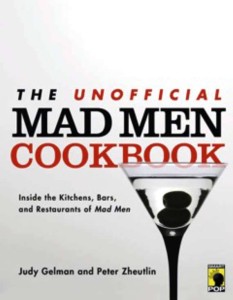 The authors frame each dish within the context of a certain episode. For instance, a recipe on gazpacho and rumaki is prefaced with the description of Season 2, Episode 8, the episode where Betty presents dishes from around the world to her guests (including, you may remember, the at-the-time somewhat exotic Heineken beer.)

The recipes aren’t from Betty’s kitchen, but from actual 1960s magazine articles. Sources include ‘The Kennedy Style’, a 1962 Ebony Magazine cookbook, the 1960’s ‘How America Eats’, among a great many others. Original dishes from New York’s great restaurants make an appearance here too — steak tartar and hearts of palm salad from Sardi’s, fettuccine alfredo from Angelo’s, chicken Kiev from the Russian Tea Room, Caesar salad from Keens Steakhouse, and of course, the original Waldorf salad and sold Amandine from the Waldorf=Astoria.

Betty Crocker, Julia Child, Amy Vanderbilt — all the icons of 60s cuisine and ettiquete are represented. Naturally, this means that few dishes are heart healthy. Butter and red meat are a defining theme.

A more classic selection of original New York recipes has perhaps never been assembled. One might squabble over the fact that most of this has nothing much to do with ‘Mad Men’ itself. But let that slide, relax and have a drink from the guide’s cocktail menu, featuring the how-tos on such classic sips as the Stork Club Cocktail, the 21 Club Bloody Mary and the Classic Algonquin Cocktail (whiskey, vermouth and pineapple juice), all sourced from the original establishments.

I was a sucker for this kind of retro mixology back in the days of the ’90s retro ‘bachelor pad’ craze, and ‘The Unofficial Mad Men Cookbook’ could fit right in with your old Esquivel CDs. But this is an entertaining collection of New York recipes, well-researched, and ready for your weekend soirees and viewing parties..

1 reply on “‘Mad Men’ returns: a guide to eating (and drinking) options”

Oh my! We’re getting into my first memories of living in New York. Shraffts and The Horn and Hardart Automats were still functioning (so too, Hojo).
Jack Dempsey’s still lit-up half of Manhattan,its well-prepared calf’s liver with bacon was a specialty. Dempsey’s had a beautiful expanse of black stone(?) lining the staircase to the lower level. After the ’64 World’s Fair, a number of countries allowed restaurants to be opened as national culinary fixtures- eg the Swiss Pavillion in midtown was quite the place for ad and publishing types. Luchow’s was still open down on the increasingly dangerous 14th St. Unfortunately, the Village was less bohemian and more stoned pan-handler turf. The Upper West Side, where I lived was viewed as being a half-block from becoming mayhem.
I fell in love with the city and will never stop loving it!