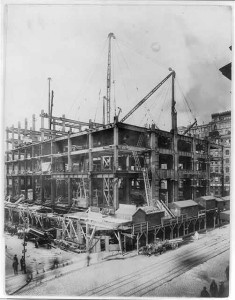 The Woolworth Building, as it appeared on January 20, 1912 (Courtesy LOC)

The Woolworth Building was the biggest story in real estate one hundred years ago, long before it was even completed.

By the waning moments of 1911, something finally began to rise out of the belching smoke and clutter collecting at the northwest corner of Broadway and Barclay Street . The building’s architect Cass Gilbert was busy at work drafting the details of the interior, and as the tower rose, so too did the cost. Luckily, retail king Frank W. Woolworth would eventually pay the entire bill ($13.5 million, from an original project cost of $5 million) in cash.

In a Jan 7, 1912 article, the New York Times assessed the state of real estate in the city, observing that the greatest developments for the year were in ‘apartment houses and lofts’, particularly on the Upper West Side and the neighborhoods west of Broadway between 14th Street and 42nd Street. While residential property was the hot commodity, they made note of seven ‘purely office structures’ that were also debuting. Of those listed, the clear standout was the new office building being designed for Woolworth.

The New York Sun was also dazzled by the Woolworth’s construction that month, announcing its construction as the crown of the ‘world’s greatest building construction era’. Any firm hired for the project promptly touted its involvement in full-page advertisements. Otis Elevators boasted of its ‘Marvelous Vertical Railways … That Are to “Whiz” the Army of Workers Up With Lightning Speed.’

It would take over fifteen months from that moment for the Woolworth Building to be completed, and what a game-changer it was when it officially opened on April 24, 1913. The tallest building in the world until 1930, the Woolworth is also distinctive to this day for its monolithic surface of terra cotta, built before the requirements of setbacks turned future skyscrapers into virtual ‘wedding cakes’.

But back in January 1912, as you can see, it rose on a few floors from street-level, not even as high as the City Hall Post Office which sat across the street. The picture below (from NYPL), taken over a month later, indicates its proximity to the post office: 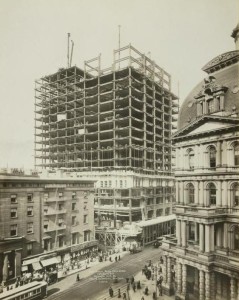 (As for the picture at top, the Library of Congress dates it as January 20, 1912, while the New York Public Library has it as December 28, 1911. You get the idea. Regardless, it’s a photo by favorite photographer Irving Underhill.)

2 replies on “A century ago, excitement builds as the Woolworth ascends”

I read this article during my scarce free time and must say it was Wool Worth It!

I hope the following link works, because I have a question: the script on the picture linked below says it’s the Woolworth building in 1910, but clearly this isn’t the case. This is the 7 Barclay Street that was there *before* construction began on Woolworths in May 1910. Does anyone agree or disagree with my logic?