A haunting snapshot of the Atlantic Docks, circa 1870-80s (possibly as early as 1872) photo by George Bradford Brainerd (courtesy the Brooklyn Museum)

Quite a few notes on the podcast this week! There were a lot of little details I found interesting that didn’t make the cut:

Before the Water Taxi: One of the more enlightening tales left on the cutting-room floor was that of the Hamilton Avenue Ferry, the 1846 Atlantic Docks ferry line that linked Red Hook with downtown Manhattan in much the same way the IKEA Water Taxi does today. As the ferry made “the shortest and most direct route from New York” to the newly constructed Green-Wood Cemetery, it also became the method by which many bodies were transported there.

Fiery renovation: A stalwart of the old community is Visitation of the Blessed Virgin Mary Roman Catholic Church (built in 1896) right off of Coffey Park, the third incarnation after the congregation grew out of the first building (originally built in 1855) and fire destroyed the second. That fire, incidentally, was allegedly caused by combustible materials workers were using to renovate the structure.

Goodbye Vienna: A vestige of World War I hysteria exists within the name of Red Hook’s Lorraine Street. According to Brooklyn By Name, the street was once named Vienna Street but was deemed ‘offensive’ during the war and was changed to reflect the area of Alsace-Lorraine, which entered French possession after the war.

What’s My Name?: I mentioned a couple facts about the neighborhood of Carroll Gardens (once considered a part of Red Hook), although we hope to elaborate further one day on a show on South Brooklyn. The name Carroll Gardens, like that of its neighbors Cobble Hill and Boerum Hill, was a real-estate invention which the community quickly embraced. (Contrast this with modern failures of real-estate re-branding, like Chumbo, BelDel and LoDel.) You might be interested in reading Carroll Garden’s original 1973 historic designation.

Below: I’m not quite sure of the story behind this sunken squatters home, taken on Van Brunt Street from the year 1900 (courtesy the Brooklyn Museum) 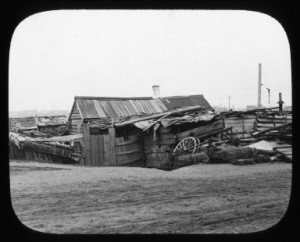 Further reading: For more information on the corruption of the  New York and Brooklyn waterfronts , I highly endorse Nathan Ward‘s ‘Dark Harbor’. It’s brilliantly lucid and immediate. In particular, he focuses some attention on the disappearance of Columbia Street longshoreman Pietro Panto and vividly describes a mob hit that took place in a building in Manhattan’s West Village, in a building next door to the treasured piano bar Marie’s Crisis. There are several books that feature chapters on Red Hook history, but a dedicated book on the subject is sorely needed. In the meantime, I recommend the short essay by Jerry Nachman that appears in “Brooklyn: A State of Mind,” about, of all things, an air conditioning crisis!

Maggie Blanck has an extraordinary web resource that begins as a genealogy of her family and elaborates into a history of Red Hook’s industrial giants. And for those of you who are fascinated by late-century street-gang history, the website Stone Greasers has an exhaustive list of gang names, many more unusual than anything you’d find in the movie The Warriors.

Red Hook as inspiration: Several sources, both on Brooklyn history and film history, discuss Red Hook’s impact on the work of both Arthur Miller and Budd Schulberg, the screenwriter of ‘On The Waterfront’.

In 2009, a unique restaging of ‘On The Waterfront’ took place aboard the Waterfront Barge Museum in Red Hook, a production that then floated to Manhattan and Hoboken waterfronts for further performances, “all places whose dock wars echoed in Terry [Malloy’s] story,” according to Ward.

Elia Kazan’s Oscar-winning film is embedded with influences from the entire New York waterfront struggle. For instance, Karl Malden‘s Father Barry is transparently inspired by Father Corridan, an activist waterfront priest from Manhattan’s west side. (Author J.T. Fisher focuses on Corridan’s contribution in his new book ‘On The Irish Waterfront’.) Of course no inspiration was greater than Malcolm Johnson‘s now classic series of articles for the New York Sun in the late 1940s, a series which won the Pulitzer Prize in 1949 — coincidentally the same year that Miller won for ‘Death of A Salesman’!

I suppose there is some controversy in some circles regarding whether Schulberg and Kazan ‘stole’ the idea of ‘Waterfront’ from Miller’s ‘The Hook’, but I’m not touching that. However you can read about it yourself in Stephen Schwartz’s argumentative 2005 article.

Thanks to commenter Rob Hill who calls to attention another fascinating literary Red Hook reference. In 1957, Harlon Ellison, one of America’s great science fiction and crime novelists, literally went undercover with a Red Hook street gang called The Barons to find inspiration for his book ‘Web of the City’ and, later, in the non-fictional account Memos From Purgatory. Ellison’s entire life would probably make a good subject for a podcast one day. Thanks Rob!

Further listening: This show shares many similar themes with our past shows on Williamsburg, Brooklyn and Corlears Hook and the Pirates of the East River. Hmm, and let’s just say, we’re probably coming back to the waterfront sooner than later this year….

Community vs Neighborhood: One listener Carolina from PortSide NY had some strong objections to my characterization of Red Hook, particularly my focus on the neighborhood’s crime and gang activity. I’m excerpting part of her letter, as it highlights a challenge that Tom and I often tackle with our podcast:

“Red Hook housed great poverty, but for decades was more mixed economically than your focus on gangland stories describes. Personally, I find what is most distinctive about Red Hook over the years is the capacity of this small place to hold AT THE SAME TIME a striking economic range in its residents and a striking range of land use from major industry to residences.“

That is an undoubtedly true statement, especially when you compare it to the fate of other dockside neighborhoods, like Corlears Hook and Water Street in Manhattan. I find there are two ways to accurately tell a story of a place like Red Hook — from an organic, street-level or ‘ground up’ perspective (what I call ‘a community history’) and from a macro-view, as a component of the larger forces of the city which contain it (or ‘a neighborhood history’).

As the creators of a New York City history podcast, we opt to recount neighborhood histories, as New Yorkers and those who love this city are familiar with the mechanisms of change that have influenced it. In this decision, we understand that the normalcy of a place can get sometimes overlooked. (After all, not every person in Five Points was a gang member or a prostitute either.)

However, the sad truth is, Red Hook was for many years nationally known as a blighted neighborhood, and it was important to inspect both how it got that way and how that condition demanded some very unique revitalization plans.  I hope I have shown how essential Red Hook was to New York, and continues to be.  We encourage you to wander around the waterfront on a sunny afternoon sometime and, in particular, check out places like the Waterfront Barge Museum.

The waterfront needs more revitalization , and if it doesn’t , Red Hook will always be a symbol of urban blight

Wow. This was a great podcast and these notes are a great followup. Thanks!