PODCAST Red Hook, Brooklyn, the neighborhood called by the Dutch ‘Roode Hoek’ for its red soil, became a key port during the 19th century, a stopping point for vessels carry a vast array of raw goods from the interior of the United States along the Erie Canal. In particular, two manmade harbors were among the greatest developments in Brooklyn history, stepping in when Manhattan’s own decaying wharves became too overcrowded.

With these basins came a mix of ethnicities to Brooklyn, and along with new styles of row houses came the usual assortment of vices — saloons and brothels along Hamilton Avenue. This fostered the development of crime along the docks, and Red Hook soon witnessed firsthand the opening salvos of 20th Century organized crime.

How did the history-rich, nautical neighborhood go from a booming center of employment to one of the worst neighborhoods in the United States by the 1990s? And can some surprising twists of fate from the last twenty years help Red Hook return to its glory days? 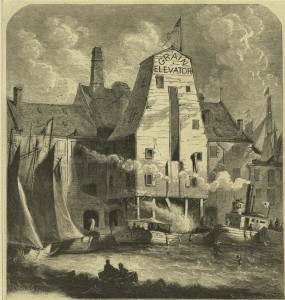 Modern living, circa 1939. The Red Hook Houses at their debut. Although the housing development cleared away a great many dilapidated homes — following a common model of urban redevelopment — the uninspired uniformity would put a dent in the neighborhood’s original character. (Courtesy LOC) 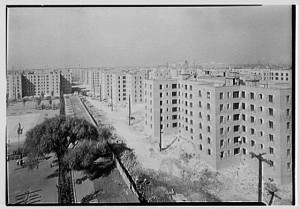 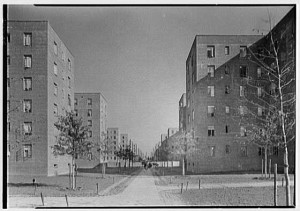 The Red Hook Play Center opened in 1936, the final of 11 swimming pools Robert Moses built during his early years as parks commissioner. Its Art Moderne style made it a beautiful if curious addition to the neighborhood. 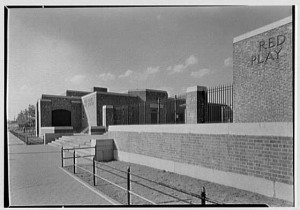 The Erie Basin, a clutter of vessels and piers, is strangely beautiful from overhead in relation to the Manhattan skyline. (Pic courtesy Wired NY) 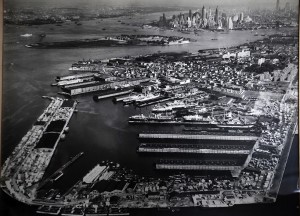 The crisis of organized crime and corruption within the longshoreman’s union along the Brooklyn waterfront was an inspiration for many writers, including Arthur Miller (below) in his unproduced screenplay ‘The Hook‘ — referring both to the neighborhood and the longshoreman’s “ever-present baling hook“. Later, Elia Kazan and screenwriter Budd Schulberg found similar inspiration for the Oscar winning film ‘On The Waterfront’, loosely basing events on situations that took place along the entire New York and Brooklyn waterfront. (The film was made in Hoboken, but there are of course famous shots of the Manhattan skyline.) 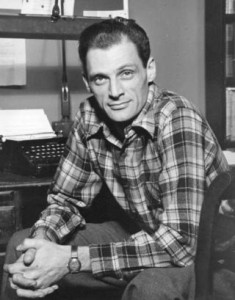 14 replies on “Red Hook, Brooklyn: A rich seafaring history, organized crime and the isolation of a beleaguered neighborhood”

Adding to Red Hook’s literary cachet, in the fifties Harlan Ellison went undercover as “Cheech Beldone” to join a local street gang called The Barons. The material gathered from this nervy venture ended up in his books Web of the City and Memos from Purgatory, the latter eventually adapted for The Alfred Hitchcock Hour (starring a young James Caan).

Wow, thanks for that. I found this short clip on YouTube. It’s obviously posted by a Star Trek fan, as it focuses on Walter Koenig, TV’s Chekov!

Article about Red Hook and Brooklyn so interesting! I live on the other side of the Hudson on the Jersey side. Ironically I never get to go to Brooklyn. All my knowledge of Brooklyn is second hand info like this!

I found your website very interesting, though havn’t been able to view any of the podcasts yet ! My great-grandfather died after falling into the Red Hook basin in November 1936, he was Dr Alexander de Soto, (the original Dr de Soto, long before the mouse dentist), and had been working (age 96) as a Dietitian aboard the Luxury Yacht Centaur. It appears that this yacht (owned by Centaur INC of Park Ave, Manhattan) had been taking wealthy passengers on tours of the Great Lakes, presumably via the Erie Canal. Despite lots of internet research I couln’t dig up any further detail about this yacht or the mysterious “Centaur Inc” said to be owned by a group of wealthy New York and Chicago capitalists. Old Dr de Soto, who was quite famous in his day, got a brief obit in the Nov 1936 Time Magazine, and a more detailed write up in the Nov 12th issue of the Brooklyn Daily Eagle (page 9). Dr de Soto was returning to the Centaur around midnight, it was moored in the Robbins Dry Dock at the foot of 23rd street. The night was dark and I guess he was a bit shakey considering his age, he lost his footing on the gang plank and fell into the icy water between the ship and the dock.
three of his shipmates managed to fish him out alive, but the “ambulance doctor” found him in a bad way, and he died in the back of the ambulance only a few blocks away !!
I wonder if any interested New Yorkers reading this, could shed any more light on this old story ?

I grew up in Red Hook from 1949 to 1966. My father was a supervisor on the docks from the 30’s to the 50’s. I have wonderful memories of Red Hook. Most families were good people, went to church, helped each other. We enjoyed the Red Hook pool, used the park and athletic fields all the time. Enjoyed teen years hanging out in the ice cream parlar just like any other town. We would swim off the docks. Made trips to Coney Island, Lk. Ronknonoma, Rye Beach, and were active with church activities. We would play games in the street like kick the can, jump rope, ride bikes and roller skate. We supported local stores and I have to be honest and say that included fathers at the bars.
You could find trouble if you wanted it, just like any other place. I feel Red Hook got a bad rep from people who lived outside of it. We had only one way to get into and out of Red Hook, the Bus. We were an isolated part of the city, and that made us feel like a little town. Many good things happened there, but that was never given any exposure. Only the negative stuff got out. Too bad, because the area was filled with wonderful people. If the stories were told of the familes and lives of the average Red Hooker, it would be interesting, rich and real. Too bad no one wants to know the real Hookers. We had lots of colorful caractors, with unusual stories. As for Al Capone, I really don’t think he was much of a presence in Red Hook. Most of the crime came from outside and dumped there.
I can not speak for Red Hook after 1966, but prior to that it was a wonderful place to live. We all took care of each other, understood each other and never looked down on thoes less fortunate. I am now in a beautiful community out in the country, but the people here are not as warm or honest as the people from Red Hook.
So when you do your research on Red Hook, give the average Joe a little respect and add stories of the good side of the Hook.
All neighborhoods have good and bad. Red Hook was not the war zone they expose it to be up to 1966. It was a community of people who were hard workers and some down on their luck. No one was rich, just hard working blue collar people. I hope it comes back to life.

Most of the crime came from outside and dumped there? I think not. Maybe you were shielded from the truth while growing up. Red Hook was home to the Profacis and the Gallos, ever heard of them? Yes there were wonderful families in Red Hook but they were just as guilty as these thugs for covering for them, looking the other way and allowing them to take over every part of that area and turning the city into a war zone during the Gallo wars! Oh beautiful Red Hook!

John, was your mother’s name Pat, dad John Your about 76 and serviced In the navy. If so we may be cousins. We also had a cousin named Danny in NJ.

Hi, I’m looking for any info and preferably any photos from an old family restaurant/diner in Red Hook from the 1940’s to the 1960/70s.
The name would have been Zeppy’s or alternate spellings of that. It was located at The End of The Docks, but I have no other exact address. Any assistance would be greatly appreciated.

I also grew up in Red Hook and have great memories about it..had good friends also. A lot of good people came oit of Red Hook as well as the notorious…I wouldn’t change growing up any where else…

Maybe some one knows a carol rasnick

For Johnny boy, I may be your cousin, was your mothers name Pat and your dad John . You would be about 76 and serviced in the Navy. Merysn44@ aol. com