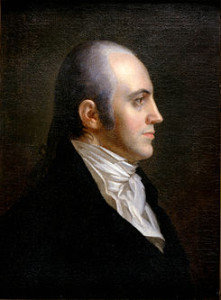 Yes, Hamilton fans, we are a proud people, judging from the many notes and supportive comments yesterday left on the Facebook page on the birthday of Alexander Hamilton, tinged with strong anti-Aaron Burr sentiment. But, from our comfortable vantage of the future, have we been too harsh on the killer Vice President?

Sure, he absolutely got away with murder. But it was, after all, a duel, willingly engaged by both participants, however misguided. Murder charges against Burr were eventually dropped, but he obviously avoided New York for many years.

His later misadventures out West — his failed, confusing efforts to infiltrate Spanish territory and allegedly form a new government in 1806 — just slathered on further scorn and distrust for the once respected lawyer. Three years after killing Alexander Hamilton, Burr was brought to federal trial for treason. He was eventually acquitted due to lack of credible evidence, much to Thomas Jefferson‘s chagrin.

After traveling through Europe and eventually going broke, Burr returned to New York and married the alleged ‘black widow’ Eliza Jumel. They divorced just four months later. The Morris-Jumel Mansion, his home during that time, is today less than two miles away from Alexander’s prized Hamilton Grange. They are two of the oldest homes still standing in northern Manhattan. (The Dyckman Farmhouse , in Inwood on 204th Street, is older than Hamilton’s house.)

Aaron Burr died in 1836 in Staten Island at a boardinghouse in the Port Richmond neighborhood, not far from the Bayonne Bridge.  The boardinghouse later became the St. James Hotel, where guests could specifically ask to stay in Burr’s room for an evening. And sleep in the same bed! A sign even hung over the mantel, “Aaron Burr died in this room.”

The former Vice President spent his last, lonely days in this particular room, shying away from curious locals and pouring over old love letters from Eliza. According to a 1895 New York Times article on the subject of his ‘deathbed’, Burr was hounded by pious ministers who wished to save his soul and release him from his crippling depression.

The article also highlights a very bizarre visitor. One guest at the boardinghouse had an unnatural fascination with Burr, but never spoke to him and kept quietly to himself. When the landlady discovered that Burr was died in his room, the stranger suddenly appeared at the door, opened his satchel and removed the materials to make a plaster death mask of the Vice President. I believe this may be the morbid mask in question!

7 replies on “Aaron Burr, Staten Island, and the tale of his death mask”

How can Gore Vidal’s masterpiece go unmentioned here. Let’s all go easy on the Hamilton fandom, eh? The man was brilliant and led an amazing life, but he had a mean monarchist streak and could be called the proto-American corporate capitalist.

Oh, we are going over the top. But his legacy is extremely interesting, and both political parties today hold dear components of some of his original views.

While Port Richmond is near the Bayonne Bridge, the link you provide to the Richmond Hill Rd. location is not near the bridge and I think is incorrect. Thanks for the otherwise fantastic article.

For a photo of the plaque on the site of Burr’s death, check out by blog, http://www.davidostewart.com/2011/11/burr-on-staten-island/. Or my book on Burr and that mysterious Western expedition, “American Emperor.”

I don’t leave many remarks, however after reading through a ton of comments on Aaron Burr, Staten Island, and the tale
of his death mask – The Bowery Boys: New York City History.
I actually do have 2 questions for you if you tend not to mind.

Is it simply me or do some of these remarks come across like
they are written by brain dead individuals? 😛 And, if you are posting at other sites,
I would like to keep up with everything fresh you have to post.
Could you make a list of all of all your social networking pages like your linkedin profile,
Facebook page or twitter feed?

The building is still there. I grew up a block away and as a teenager was always trying to go up there to play pool at Mango’s pool hall. But Mango was strict and wouldn’t allow underage players.
Across the street on the water side was the Bayonne ferry.