There are several enemies in Candice Millard‘s ‘Destiny of the Republic‘, the terrific narrative history of the assassination of President James Garfield during the summer of 1881. The most obvious foe is the delusional Charles Guiteau, who believed himself the nation’s savior when he shot President Garfield twice at a Washington DC train station on July 2, 1881. Then there were the microbial infections transmitted during improperly sanitized operations performed by Garfield’s doctor at the White House, causing blood poisoning that worsened the president’s suffering and ultimately killed him.

For the purposes on this blog, however, I was drawn into the tales of two New York politicians who became victims of rumor-mongering that summer. Powerful New York senator Roscoe Conkling was seen as a political rival of Garfield’s, a thorn in the president’s side, especially considering Conkling’s own political protege — his pawn, really — was Garfield’s vice president, Chester A. Arthur. Traumatic crises in this country are frequently accompanied by a churning undercurrent of suspicion and conspiracy, and Conkling and Arthur became victims of just such a shadowy accusation that summer. 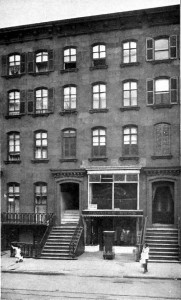 Many believed Conkling to be culpable of the assassination attempt himself — perhaps not of pulling the trigger, but of fostering and encouraging the discord that inspired it. It’s not a stretch to consider Conkling an embodiment of the spoils system which determined hundreds of government jobs through political affiliation. Guiteau thought himself unfairly left out of that patronage system when he attacked Garfield that hot July day.

A few weeks ago I wrote about the Fifth Avenue Hotel, the luxury accommodation at 23rd Street off Madison Square that became Conkling’s second home and a regular scene of political intrigue for the Republican Party. Conkling endured the disintegration of his political career from his rooms here.

Meanwhile, many were mortified at the very thought of Arthur, hardly a universally admired figure, ascending to the presidency. While the president lay incapacitated in Washington, there was even debate as to when presidential responsibilities should cede to the vice president. Nobody seemed enthusiastic at the prospect of a President Chester A. Arthur.

Thus, Arthur essentially spent his summer hiding out in his townhouse at 123 Lexington Avenue (at right), fearful of seeming overly ambitious even as the fate of President Garfield seemed uncertain. On the day the president finally succumbed to his injuries, Arthur sobbed uncontrollably from his shuttered home as servants shooed away the press. Several hours later, he was sworn in as the 21st President of the United States on September 20, at 2:15 a.m, from the green-shuttered parlor of his home here.

‘Destiny of the Republic’ is a swift, thrilling read, certainly worthy of the praise it received when it was released last year, bringing in a cast of icons (including Alexander Graham Bell and Joseph Lister) to present a frightening world of medical uncertainty and strange madness.

1 reply on “As Garfield fights for life, Arthur lays low in Murray Hill”

I first read about 123 Lexington Avenue in Sarah Vowell’s book Assassination Vacation. It’s an area of the city I’m in often, and I had no idea about the building’s history. There’s a plaque there behind the glass of the entrance foyer that reads: “Here on September 20, 1881, at 2:15 A.M., on Chester Alan Arthur took his oath of office as 21st President of the United States upon the death of President James A. Garfield, killed by a disgruntled office seeker. Garfield’s death stirred nationwide civil service reform and on January 16, 1883, President Arthur signed the U.S. Cvil Service Act ending the spoils system and creating the American civil service. This house was later occupied by publisher William Randolph Hearst.” And that’s it. A building of tremendous historical significance, but it still seems to be a bit ashamed.