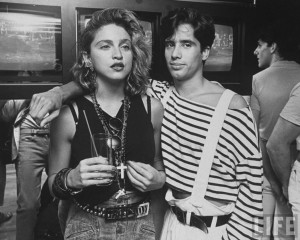 It’s 1984, and the hottest trend in American pop culture is the music video . MTV had debuted a channel of non-stop music videos in 1981, and just three years later, most new pop superstars were being defined by them– Michael Jackson, Prince, Duran Duran, Cyndi Lauper, Wham, Culture Club.

One of the more notable New York club opening in the summer of 1984 was Private Eyes, a trendy gay lounge at 12 W. 21st Street, poised to meet the video future with full-on glittery radness. With MTV revolutionizing pop music by the early 80s, nightclubs rushed to incorporate the new trend into their aesthetic. At Private Eyes, clubgoers needn’t have worried about a frenetic disco floor; they were literally invited to be mesmerized. “There is no defined dance area — it’s like a living room with the coffee table pushed aside.” the owner told Billboard magazine in November 1984.

The club was state-of-the-art for its day, with almost three dozen television sets, an immense library of 3/4th inch VHS cassettes and the technology to make “beat-for-beat transitions between videos, as well as wipes, fades and full mix effects for the club’s six tape decks.” New York Magazine listed it among their ‘environment clubs‘ of 1984, “like a department-store television section, except at Private Eyes you can have a beer and you can’t change the channel.”

In its opening months, Private Eyes scored a few appearances by music video’s biggest female star of the day — Madonna.

As a friend of owner Robert Shalom, Madge allegedly swore by the club, sometimes popping in after a day of recording her album Like A Virgin over at the Power Station studios on W. 53th Street*. “I donâ€™t have MTV,” she remarked. “I do see videos, I go to Private Eyes.”  Her record label hosted a party in celebration of her new album, released in November that year. Several months later, Madonna was photographed at the club with her rowdy companion Sean Penn on their first date.

Below: Madonna, inside Private Eyes with Grace Jones, sometime in 1984, perhaps both having difficulty watching music videos with sunglasses on 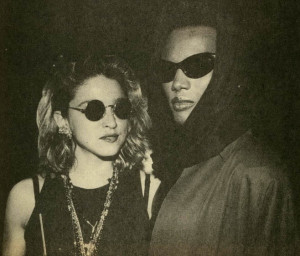 The strict notion of a ‘video club’ in New York faded when it became cheaper for smaller clubs to install multiple screens and access video material. And, of course, as more common clubs joined the video revolution, the swankier ones eschewed it. Dance clubs that did opt for visual entertainment embraced ambient sets of computer animation by the early 90s, often leaving standard music videos for MTV and other cable networks. (Eventually even MTV left music videos.)

Private Eyes morphed with the times, eventually becoming the Sound Factory Bar in the 1990s, a spin off of sorts to the renown but troubled all-hours club on W. 27th Street, in the shadow of the West Chelsea’s elevated tracks. It refreshed its image a few years later under the name Cheetah.

Madonna, who had starred in five music videos by the time she first stepped foot in Private Eyes in the summer of ’84, has gone on to make a total of sixty-nine of them, including one that was just released this week.

*The year before, Bruce Springsteen recorded portions of ‘Born In The U.S.A.’ in the same studios.