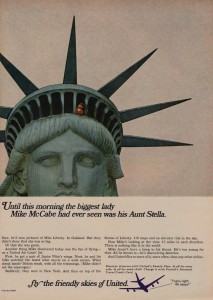 WARNING The article contains a few spoilers about last night’s show, so if you’re a fan of the show, come back once you’re watched the episode.


‘Mad Men’ returned to AMC last night, ramping up its regular displays of well-primped, misogynistic Madison Avenue ambition. On Mondays here on the blog, I’ll drill down for inspiration into the smaller details from the show that deal specifically with New York City history. And on Sundays, during the show itself (when possible), I’ll be playing along on Twitter, throwing out little trivia tidbits as quickly and accurately as humanly possible.

Everybody seems to be talking about the slinky performance of Gillian Hill‘s ditty ‘Zou Bisou Bisou‘ — or ‘Zoo Be Zoo Be Zoo’ if you prefer the Sophia Loren version — by Don Draper’s new wife Megan. And civil rights issues finally begin to bubble to the surface when a nasty water-balloon incident by a rival firm (based upon a real event, down to the dialogue!) somehow ends with Sterling Cooper Draper Pryce possibly hiring their first African-American secretary.

But I was struck by a throwaway line uttered early in the episode by Don’s son Bobby Draper — played by yet another young actor, the fourth Bobby in the show’s five seasons. With the children over at Don and Megan’s Manhattan apartment for the Memorial Day holiday, Don emptily suggests this will be the day they go visit the Statue of Liberty. Bobby shrugs and says, “We always say that, but we never do.”

The remark is meant to imply all the cheerful, all-American things that the Draper family never seem to do together anymore. When Don drops the kids off at the home of ex-wife Betty and her new husband, he refers to the couple inside as ‘Morticia and Lurch‘. (Did Don know that ABC had just cancelled The Addams Family the month before?)

Oh, but I do wish the Drapers had gone to the Statue of Liberty at that moment, in late May 1966, as they might have witnessed a rather remarkable sight — the virtual invasion of Liberty Island by stolid representatives from Jersey City!

Once called Bedloe’s Island, the alleged hiding place of pirate’s treasure and the home of Frederic Bertholdi‘s statue since 1886, Liberty Island actually sits within the state line of New Jersey, as does its partner Ellis Island. In fact, some of Ellis Island’s reclaimed land is still considered part of New Jersey. However, Bedloe’s has been within the jurisdiction of New York since a compact between the two state governments was signed in February 1834.

New Jersey has not always been happy with this arrangement. On the afternoon of May 23, 1966, a group of over four dozen Jersey City Chamber of Commerce members stormed across the water and ‘conquered‘ Liberty Island, pressing their contention that the island should be part of their state.

With ‘the Federal Government cooperating as a friendly non-belligerent’, the New Jersey businessmen, joined by Jersey City mayor Thomas J. Whelan in a ‘festive, bloodless invasion’, rattled off their demands, including equal recognition of Jersey City and New York, direct access to Circle Line boat service from the island, and even a change to Liberty Island’s postal address.

Don could have even brought his new bride Megan — of ‘French extraction’ as she might say — as a representative of the French government was also on hand to confirm friendly relations between the two parties. (I assume he meant between America and France.) Afterwards, Air France even provided a box lunch to the Jersey City aggressors! 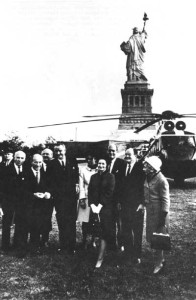 The event was, of course, mostly for show, for greater plans were already in play. In the previous year, the Statue of Liberty and Ellis Island were enjoined as a national monument under one administrative entity, the National Park Service. By October 1966, they were also listed as inaugural members of the U.S. National Register of Historic Places.

The Statue of Liberty often served as a complicated symbol for 1960s political debate, a touchstone for civil rights activists and an ironic construct for many antiwar protesters embittered by the Vietnam War.

In 1965, the FBI and New York police snuffed out an attempt by the Black Liberation Front to smuggle dynamite onto the island and blow up the statue. That same year, President Lyndon B. Johnson (at right) traveled to Liberty Island to sign into law the Immigration and Naturalization Act, a pivotal and far-reaching change to American policy that essentially eliminated immigration quotas.

A few years later, antiwar activists staged a Christmastime demonstration here, barricaded themselves inside the statue for almost two days. In sad need of disrepair by the late 60s, Lady Liberty even represented a certain dislodging of the American dream to many, a sentiment strongly recognized by the 1970s which led to the statue’s rehabilitation for her 1986 centennial celebration.

In the 80s, Governor Tom Kean hit a golfball off of Jersey that landed on Liberty Island saying that that proved that the island belonged to Jersey.
In response, then Mayor Ed Koch went to the island, putted a golfball a few feet and said it proved it belonged to NY.