Most Holy Trinity in Bushwick, Brooklyn, shrouded in shadow, a place where the ghosts of former clergy are alleged to lurk the halls and other spirits may torment the nearby school.

PODCAST What mischievous phantoms and malevolent spirits haunt the streets of New York City today? In our fifth annual podcast of local ghost stories, we bring you the histories of four very haunted places from three boroughs and a small island in the harbor.

The legend of Captain Kidd‘s buried treasure — alleged to be buried in the New York region — inspires our first ghost tale of two ambitious soldiers on a quest during a full moon, on an island that today contains theÂ Statue of Liberty!Â Meanwhile, out in Brooklyn, a congregation gathers at a new Catholic church, but maybe they shouldn’t have built it over a graveyard. Do the spirits of dead clergy haunt the halls today?

The Palace Theatre in Manhattan has hosted the greatest names in entertainment — and continues to play host to the undead. And finally, we hesitate to bring you the malevolent events at the Kreischer Mansion in Staten Island. What is it about this house that has inspired stories for over a hundred years, and did ghosts from a century ago have something to do with a horrifying and gory crime that took place here just a few years ago?

Bedloe’s Island: Below is a depiction of its southern shore in 1831. It was on the northern end during this period that two sentries at Fort Wood had a most unfortunate encounter while searching for buried treasure. (Image courtesy NYPL) 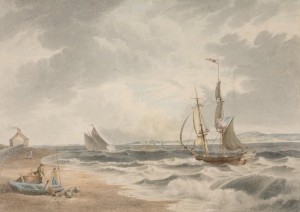 Legends of Captain Kidd’s treasure have possessed New Yorkers for centuries. It’s rumored that he killed one or two of his men and buried their bodies with the treasure to ‘guard’ it. Do these bodies lurk underneath the shadow of the Statue of Liberty? (NYPL) 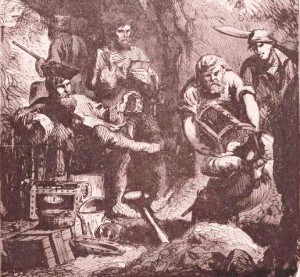 Most Holy Trinity in Bushwick, Brooklyn, site of alleged hauntings from a variety of spirits. 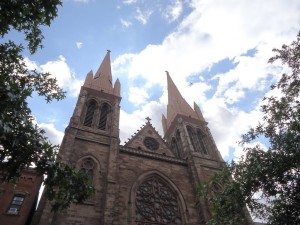 The Palace Theater rises over Times Square, hosting the greats of vaudeville. But the stage has also attracted its share of ghost sightings over the year, including that of one very tenacious acrobat. 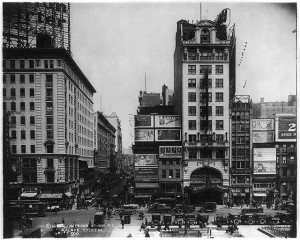 The legendary Judy Garland appeared here in the 1960s. Does she still lurk backstage today? 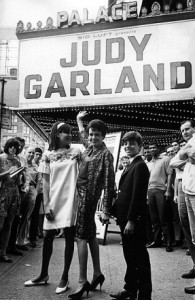 The Tale of Two Houses: The Kreischer Mansion in southern Staten Island, famous among generations of children as being an iconic haunted house, was actually once two houses. Or rather, a parallel house, mirroring the other in every way, once stood nearby, home built for the sons of a prominent German brick maker. 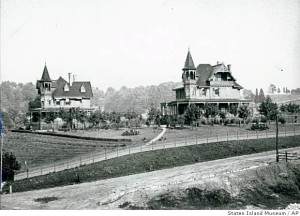 The mansion in the mid 1980s (Courtesy Flickr/Revup67) 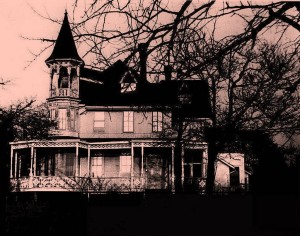 Video filmed of the Kreischer Mansion in 1983:

In 2003, some amateur ghost hunters were allowed to photograph the property, escorted by the house’s caretaker at the time. From description, I believe the caretaker is the same person who committed a gory and terrible murder here just a few years later!

3 replies on “Haunted Histories of New York: What horrors lie beneath the foundations of the city’s treasured landmarks?”

Good thing you were aloud to photograph this. Although you may have done as well quietly.

It’s not as impressive looking on the inside as I thought it might be. The exterior..meh..

Considering that the poor used to bury their dead in the tenement basements, I wouldn’t be surprised if all the old buildings are haunted.