We had a terrific time recording this year’s ghost-story show — Haunted Histories of New York. Here’s some extra details about our four subjects that were left out of this week’s show.

(By the way, if you wouldn’t mind, please vote for us in this year’s 2011 Podcast Awards. We’re in the Best Travel Podcast section. Thanks!)

Liberty Island and the Captain Kidd’s treasure
If indeed there was treasure buried on Bedloe’s Island (today’s Liberty Island),Â WilliamÂ Kidd and his motley crew would have concealed it there under the gaze of the island’s owner. In the 1690s, when Kidd would have lived in New York, the island was owned by a woman — Mary Bedlow Smith.

The small island property was originally owned by a Dutchman Isaack Bedloo, who remained in the harbor after New Amsterdam became New York in 1664. He even Anglicized his name, as evidenced by his daughter’s name. She sold the island in 1732 to one of the most wealthy and powerful men in all the British colony — Adolphe Philipse. From there, the island was often used as a quarantine station or ‘pest house’ to shelter those with communicative disease. Many hundreds of afflicted were thrown here in the mid-17th century, and many died here.

Below: A map of Bedloe’s Island in 1766, before the construction of Fort Wood. TheÂ map is strangely situated, but I believe that the stone where Kidd’s treasure was allegedly buried would have near the pointed end. (Courtesy the National Park Service.) 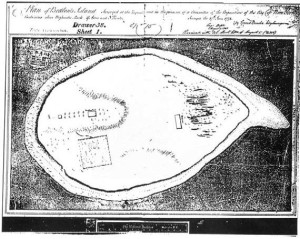 The Holy Ghost — Most Holy Trinity, Bushwick, Brooklyn
Some believe that Most Holy Trinity’sÂ beloved MonsignorÂ Michael May haunts the present halls of the church. On the occasion of May’s funeral in 1895 — he had diedÂ on the second floor of the adjoining rectory –Â the church nearly experienced a tragedy from which it would have surely never recovered.

A New York Times article from February 1895 reveals that a chronic weakness was discovered to the building’s architecture. As I mentioned in the podcast, vast, old passages exist underneath the church, extending to adjacent buildings. These passages had been used for safety during anti-Catholic attacks in the 1850s and even as safe havens for escaping Southern slaves on the Underground Railroad in the 1860s.

Monsignor MayÂ was so beloved that almost 5,000 people arrived for his funeral, the most the church had ever seen at one time. I’ll let the article reveal the potential horror of this situation: “Carpenters and masons at work on the vault in the basement discovered that the floor above them had sunk several inches in the centre, and that the cross beams had split, as had the big girders supporting the cross beams.”

The floor actually begin to sway in front of the masons. Within moments, the crowded church would have caved in, easily killing hundreds. What became one of the biggest gatherings in the church history would have instead become an unspeakableÂ catastrophe.

The workmen advised the clergy to evacuate the center aisle and then worked briskly to create temporary braces. The crisis, thankfully, was averted.

The Lonely Acrobat — Ghosts At The Palace Theatre 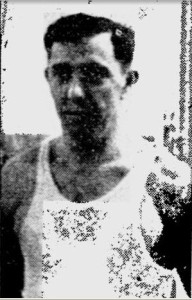 The tragic acrobatic act at the Palace Theatre thatÂ inspired the venue’s most famous ghost storyÂ isÂ veiled in mystery and misunderstanding. There’s manyÂ falsehoods about the incident that Tom successfully dispelled, but there’s one he missed. Most modern retellings call the acrobat in questionÂ Louis Borsolino.Â  His actual name, according to local papers in the troupe’s hometown of Reading, PA, list hims as Louis Bossalina, pictured at right.By the way, the name of the particular trick that Bossolina was doing at the Palace Theatre that fateful day? It was called the Death Loop. He is popularly rumored to have died from the accident, an unsurprising assumptionÂ consideringÂ how many people saw the fall, knowing the name of the failed trick.Â In reality, Bassolina survived the ordeal and was released from the hospital nine days later. To be clear, he didn’t dieÂ at the Palace;Â he went on to perform with the troupe until they disbanded in 1937.

He lived a perfectly normal life outside the spotlight, for over three more decades, before dying at age 61, in August 1963. If he truly haunts the Palace today, then the torment must have possessed him so greatly during life that he continually returns for repeat performances!

As you heard in the podcast, joining Louis’ ghost at the Palace is an apparition of oneÂ of the theater’s greatest stars. Here’s a recording of Judy Garland’s curtain call from her veryÂ last performance at the Palace Theatre on August 26, 1967. Judy would be dead within two years of a drug overdose. I wonder if anybody has ever seen the ghosts of Louis and Judy on the same night?

The Tale of Two Houses — Kreischer Mansion
The famously haunted Kreischer Mansion was built for a son of brick mogul Balthazar Kreischer. He made his wealth using Staten Island clay to produce the building materials for a growing city, and he created a company town (appropriately called Kreischerville) near the Arthur Kill. But Kreischer got his start in the Lower East Side — on a street that is no longer there.

Balthazar arrived in New York in 1836 and quickly excelled in construction, in the years following the Great Fire which destroyed hundreds of structures in the heart of the old city. By 1845, Kreischer entered into the brick-making business with one Charles Mumpeson. Although they had already discovered the potential of Staten Island clay — their company was called New York and Staten Island Fire Brick and Clay Retort Works — their original factory was at 58 Goerck Street at Delancey Street. 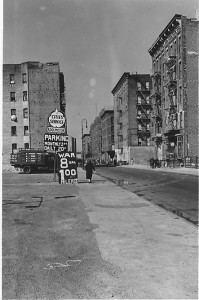 The odd little street, which ran parallel to the East River from Grand Street to East 3rd, was a vestige of an abandoned city plan, well before the great Commissioners Plan of 1811. Casimir Goerck was the surveyor for the failed plan, working with renown designer Joseph-Francois Mangin, best known for working on New York’s new City Hall building. The plan was discarded, but two small Lower East Side streets from the plan were eventually used — Goerck Street and Mangin Street.
At right: The corner of Goerck Street and Rivington StreetÂ in 1939 (NYPL)

Kreischer maintained his brick factory here for years before moving the bulk of his operations to Staten Island. Goerck Street would disappear entirely with the construction of housing developments in the 1940s. A tiny vestige of Mangin Street, however, still hangs on, underneath the Williamsburg Bridge.

The Kreischer Mansion was used in the filming of Boardwalk Empire. I believe it is the impressive Victorian mansion that Dabney Coleman’s character lives in. His character, Commodore Louis Kaestner, is also of German descent.