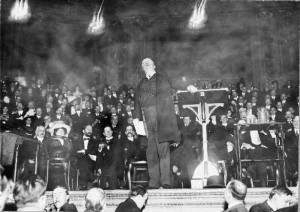 One hundred years ago yesterday, New York hosted its first-ever Republican presidential primary. Not only was it an organizational failure of epic proportions, but the results handed a stunning and rare defeat to one of New York’s most iconic politicians.

Making the 1912 primary a unique contest was that it was between two presidents — the current one, William Howard Taft, and the prior one, Theodore Roosevelt. (Robert La Follette was also on the ticket, serving as a bit of a Ralph Nader-esque outsider.) Dissatisfaction with Taft’s administration had convinced Roosevelt to obtain his party’s nomination once again, having served in the White House for almost eight years already.

Roosevelt laid out his plank during a memorable speech at Carnegie Hall (pictured above) on March 20, 1912: “THE great fundamental issue now before the Republican party and before our people can be stated briefly. It is: Are the American people fit to govern themselves, to rule themselves, to control themselves? I believe they are. My opponents do not.”

Getting out a powerful incumbent was a difficult task, one that Roosevelt supporters thought could be overcome with the debut of the Republican primary process to the political system. The primary system was considered progressive for its day, putting the delegate process to a popular vote. But New York’s first Republican primary, held on March 26, 1912, quickly dissolved into chaos.

Poll workers were ready to make history that morning, only to arrive at polling stations bereft of ballots. Voting locations throughout the city opened that day with nary a ballot in sight. The outer boroughs suffered greatly, and in over a hundred locations, ballots never arrived. Voters waited in line for hours, only to be told that would not get an opportunity to select a candidate. At some voting locations, ballots arrived a few minutes before the polls closed at 9 p.m.

‘Kings, Queens and Richmond Largely Disenfranchised,’ proclaimed the New York Sun, while the Tribune found ‘Big Confusion Throughout the City‘. Some clever operators quickly hammered out unofficial ballots on typewriters for anxious voters, hoping they would be accepted. 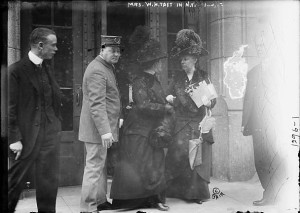 Manhattan voters had fewer problems at their polling stations, as moving vans rushed ballots to locations throughout the city. But the result did not help out the former president.

Political machines still held sway in local politics, and New York was now firmly in Taft’s camp. The incumbent easily won the state, although the voting hiccups throughout the other counties allowed Roosevelt supporters to cry foul. A representative of Roosevelt’s election committee wailed to the New York Times that “the primary election here today was not only a farce, but goes beyond that and is an insult to the city.”

Roosevelt came back from this messy defeat to win nine primaries in other states. Unfortunately, most states still chose delegates at state conventions, a system that favored Taft. At the national convention, Taft was chosen again as the Republican candidate. Roosevelt bolted and ran as a progressive third party candidate (the so-called ‘Bull Moose’ party).

While campaigning in Milwaukee, Roosevelt was shot in the chest by an insane saloon keeper, surviving the impact due to his eyeglass case and a voluminous speech absorbing most of the blow.

Both Taft and Roosevelt lost that November to the Democrat Woodrow Wilson.

Pictures courtesy the Library of Congress