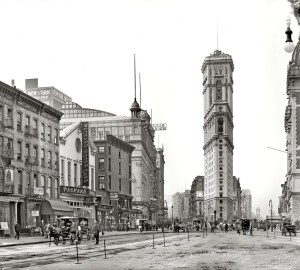 In 1904, the first year that Longacre Square tried on its new name Times Square, it was still populated with horse-related services like carriage shops and stables. But it seems the horse-less carriages were represented too. In the photograph above, the white building with the triangular roof, once a stable, was now home to the Packard Motor Car dealership, its address 1540 Broadway.

The Ohio-based car company would spread out several dealerships throughout the New York area, but made a go of it at this location from 1904-1907. As the fate of Times Square as New York’s entertainment focal point had not yet been solidified, it probably seemed natural to sell cars here. By 1907, they moved to the less chaotic corner of Broadway and 61st Street.

Below: one of the vehicles one might be able to purchase at the shop. 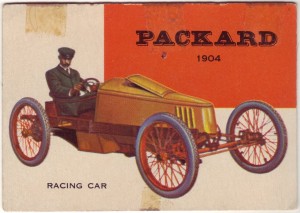 And finally an advertisement from a ‘Horseless Age’ trade magazine, mentioning the Packard location: It seems that they are talking about “motor stops”, which from the context seems to mean stopping for work to be done on the motor.
I’m not so sure they meant that it would go 1000 miles without refueling.