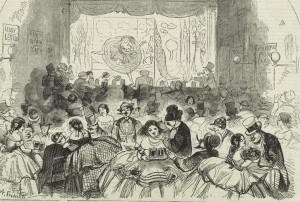 A Broadway saloon in 1859 during a ‘Sunday sacred concert’, as in, not very sacred at all. The Santa Claus probably looked like this on a good night. [Courtesy NYPL]

I’m doing some research on a couple upcoming entries for the How New York Saved Christmas feature which I started last year and came across something rather odd and Christmas-related that didn’t save anything at all.

Broadway was becoming New York’s de facto entertainment district after the 1830s, ushered in by luxury shops, pleasure gardens, and grand theatrical palaces like the Olympic (at Grand Street) and the Chambers Street Theatre. The Bowery, pretender to that title, would stoop (or elevate, depending on your tastes) to tawdrier amusements, starting with horse shows and comedic theater and degenerating into that infamous row of saloons and dance halls.

But the line was never precisely drawn and, anyway, weren’t the bawdier establishments more fun anyway? And so it was that saloons with musical acts seeped over to the more fashionable street, which explains how Santa Claus came to Broadway.

Not the bearded heavy-set gentlemen from north of Canada, but a place named in his honor. Santa Claus was a dance hall originally located at 596 Broadway, placing it adjacent to the newly built Metropolitan Hotel (on the Niblo’s Garden property).

Little is known about the ‘concert saloon’, as it was billed by its owner R. W. Williams. Opening in 1858, it may have attracted mixed clientele just below the line of New York respectability, but its bill of entertainment pretended otherwise. The unadorned long hall had a sawdust floor, a smattering of billiard tables and a high stage for performances from an odd mix of “opera, ballet, concerts, minstrels and gymnasts,” according to advertisements.

It’s not clear why such a place would be named Santa Claus who, as far as we know, is not a drinker. Enjoying the delights of an ‘uncommonly stocked bar’, patrons could enjoy German acrobats, ‘singing and dancing gypsies’, dog tricks, Irish comedians or, for a more somber occasion, the sounds of Dodworth’s Military Band and Cornet Corps. And all for a door charge of twelve cents.

The only review of the place I could find (a fussy, otherwise condescending review from a Dec 1858 issue of the New York Times) paints a dour scene, a ‘cheerless-looking hall’ with ‘a very dingy and forlorn aspect’. Interestingly, the place appears to cater to both white and black patrons, which the Times reviewer did not particular care for.

Santa Claus lost its lease and in 1859 moved a bit south to 72 Prince Street. At its new home, you could hear the talents of ‘pleasing concert singer’ Julia Barton, Spanish dancer Josephine West or minstral comedian Jerry Merrifield.

One source I found calls the Santa Claus “the first recognizable New York variety theater,” although few were recognizing anything here, and it appears that the new Santa Claus never made it to another Christmas.