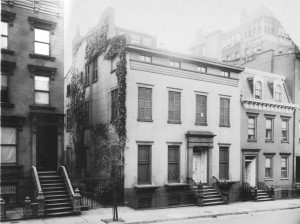 The strange, yellow Brooklyn Heights mansion best known as the home where Truman Capote wrote ‘Breakfast At Tiffany’s’ has finally been sold for $12 million, after many months of humbling markdowns from its original hefty pricetag.
Located in the heart of old Brooklyn, the new owners will be winning more than a literary prize. The house has a rather unusual past full of influential inhabitants and has been used in some curious ways:
1) 70 Willow Street, in the popular Greek revival style of the day, was built in 1839 by Adrian Van Sinderen, the descendant of original Dutch settlers in New Amsterdam and a fiery Revolutionary War-era reverend from Flatbush, Ulpianus Van Sinderen. Van Sinderen’s lavish urban villa — it has almost a dozen fireplaces — is one of the oldest houses in the neighborhood, but not the oldest. There are a few neighboring houses that are older, including 24 Middagh Street, just a couple blocks away and built in 1824.
2) The house passed to his son Adrian Jr., a prominent New York lawyer, who fell spectacularly from grace when he mishandled the family trust. He died nearly penniless and alone in New Lots, far outside the sphere of wealth, in 1864. (There’s an avenue near that east Brooklyn neighborhood named for the Van Sinderen family.) His descendants appear to have done better. Another Adrian Van Sinderen has an annual book-collecting competition named for him at Yale University.
3) The ‘estate of Van Sinderen’, as it was often called then, was built for a single family, but by the late 1860s, the roomy floors were being split up for several tenants. From an October 1869 classified ad in the Brooklyn Eagle:”One large, handsomely furnished second floor room for gentleman and wife or gentlemen willing to room together.”*** 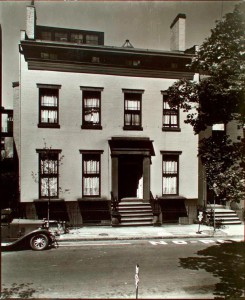 4) The primary resident during the late 19th century was the banker William Putnam, better known as a significant trustee for the Brooklyn Museum in its early years. He betrothed to the museum paintings by Rembrandt and Monet, as well as some ‘Royal Copenhagen  porcelain’ that rivaled that of European rulers, according to the Times.

5) The house was a pivotal location for the women’s suffrage movement. Scratch that, the anti-women’s suffrage movement. The newly married lady of the house, Caroline Putnam, and her sister Lillian joined other local ladies of means in organizing protests against granting women the right to vote or, in the words of their 1894 petition, to protest “the obligations of the ballot upon the women of the state.” Mrs. Putnam also hosted French conservation classes and literary salons from her parlor here. [source]
The picture at top shows the house as it looked in 1922. At right, the home in 1936. (Pictures courtesy New York Public Library.)
6) After Mrs. Putnam died in 1940, the house sat entirely vacant until 1944, when it was donated to the Red Cross. They used the house as a classroom, teaching arts and crafts, Braille to the blind and cooking classes to the wives of returning soldiers from World War II. 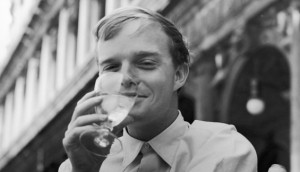 7) In 1953, the old house landed in the hands of renown Broadway stage designer Oliver Smith, responsible for the original scenery from great American musicals like Oklahoma!, Guys and Dolls and West Side Story. In his lifetime, he was nominated for 25 Tony Awards. With some of his earnings from the musical On The Town, Smith bought 70 Willow Street and lived here until he died in 1994.

8) From 1955 to 1965, he lent the basement apartment to his friend Truman Capote. The blond Southern writer was simply wild about Brooklyn Heights and basically charmed himself into a permanent room on Willow Street. From his essay ‘A House on the Heights,‘ Capote describes, “We [Smith and Capote] sat on the porch consulting Martinis — I urged him to have one more, another. It got to be quite late, he began to see my point; yes, twenty-eight rooms were rather a lot; and yes it seemed only fair that I should have some of them.”

9) Decked out in green wallpaper and odd knickknacks, “an atmosphere of perpetual Christmas,” the house would prove a place of great inspiration for Capote. He wrote part of ‘Breakfast At Tiffany’s‘ here. Perhaps more notably, it was here that he picked up a New York Times are read about the brutal slaying of a Kansas family. Capote set about working on what became ‘In Cold Blood‘ the next day.

10) I can’t leave the tale of 70 Willow Street without mentioning one of its most famous lunch guests — Jackie Kennedy. Capote conveniently left out the fact that the house was Smith’s, not his. “She laughed about it, because suddenly in the middle of lunch she got the idea that it wasn’t his,” Smith recalled later. “I suppose I acted as if it were mine.”

***A reader emailed me to say that the addresses for Willow Street were differently numbered before 1865 and that this ad probably refers to a neighbor of 70 Willow Street. In that case, I’ll replace that fact with one I should have mentioned in the lede of this article — as reported by Brownstoner, the $12 million final price tag for 70 Willow Street makes it the most expensive house purchase in Brooklyn history. Does this mean that nobody has yet bought my dream apartment in DUMBO?

Great stuff, but as a van Sinderen descendant I have to correct one point. The Adrian van Sinderen who died in 1892 in New Lots on the family farm was a different person altogether from the embezzling Adrian van Sinderen, who in fact turned up in 1893 in Berlin. A Times piece from 11/11/1893 has the amazing story (though as to what happened afterward to the embezzling Adrian, I’m not sure): http://query.nytimes.com/mem/archive-free/pdf?res=F10D1FF63B5F1A738DDDA80994D9415B8385F0D3

Worth mentioning that the house is now owned by Dan Houser, co-creator of the notorious Grand Theft Auto videogames.