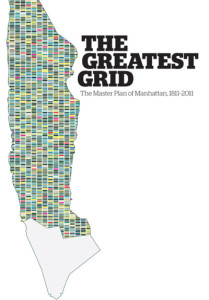 Reason to love New York No. 12,306: A museum honoring the city’s history has a hit on its hands with an elaborate show about surveying and real estate.

‘The Greatest Grid: The Master Plan of Manhattan 1811-2011‘, the smash-hit exhibition at the Museum of the City of New York, is the most fully realized and in-depth show they’ve produced in a few years, and it’s done almost entirely without the help of traditional three-dimensional objects.  (The show has also been extended, until July 15.)

The story of the Commissioners Plan of 1811 and the effects of the Manhattan grid plan are wondrously illustrated with an extraordinary collection of maps and photographs, documenting the island’s almost century-long conversion into a major metropolis. The most substantial, non-printed object is a small marble surveying post.

But there’s a problem with a show based on maps. You actually want to touch things, draw your finger along familiar areas, and stand staring at pictures unfamiliar landscapes, trying to find evidence of your present street corner. More than once I caught myself poking an artifact in sudden amazement. (My apologizes to the museum curators.)

This is what makes the exhibit’s companion volume ‘The Greatest Grid: The Master Plan of Manhattan 1811-2011‘, edited by Hilary Ballon, pretty much invaluable. Published in a slender landscape binding, the book condenses the exhibition but allows for unabated curiosity and imaginative wanderings over vivid prints of aged topography.

This exhibit stands in contrast with Mannahatta/Manhattan, another excellent show from 2009 which aroused New York history lovers. Mannahatta was map-based, but pure speculation, an imagining of what the island was like before European habitation. ‘The Greatest Grid’ starts from many of the same sources — the Mannahatta Project was built upon early 18th century topographical maps — but elaborates forth upon the present landscape with stunningly detailed drawings of almost every inch of Manhattan.

While the show gives nods to the original three commissioners — and of course to John Randel, the surveyor tasked with outlining every foot of land — it’s the later applications of the grid plan that I found most fascinating. The book reprints images of country homes next to street plans that would shortly cut through the property. It’s a melancholy display, I guess, the destruction of natural beauty has rarely been as fascinating.

Original surveying maps are complemented with lithographs and photography illustrating the final product, in some cases carved blocks with lonely structures, waiting for the city to catch up to them. The companion guide, stuffed with short essays and full-bodied artifact descriptions by museum staff, reprints almost every image from the show.

Many such exhibition books suffer from the transfer. As an extreme example, last year’s lustrous, blockbuster Alexander McQueen exhibit at the Metropolitan Museum of Art was rendered into a diminutive curio with its accompanying companion book. ‘The Greatest Grid’ suffers no such problem, especially to those of us who find tinted topographical maps and black-and-white images of old New York as scintillating as haute couture.

——
Our podcast on the Commissioners Plan of 1811 merely skims the surface of material presented in ‘The Greatest Grid’, but I think it makes for a fine introduction. And I’m not ashamed to say we spend quite a bit of time talking about Gouverneur Morris. [You can download it from here.]