â€œWhen a woman has reached the age of thirty there is nothing left for her but to be good. I am going to make clothes for the poor. Hand me down that roll of flannel, Rachel: I mean to begin at once.”

“If it will be any comfort to you, my dear,” began Rachel, soothingly, if monotonously. “I read the other day that women of thirty were all the fashion, and that girls of twenty were quite out of it.”


“That was written by a person of forty then, my dear.â€

Happy Leap Day, single ladies! Put a ring on it! For four years — 1,460 straight days — men have been the initiators in romance. Women were to mildly express interest in a mate, her demure politeness disguising anything possibly resembling passion as she awaited a marriage proposal from the confines of her parents home. But not so on February 29, according to custom. On this day, women get to playfully assert themselves in the parlor, boldly proposing to the men they desire.

Although this Leap Day tradition allegedly dates back to the Elizabethan era and even further, the proper folk of the Victorian — and within the societal confines of New York — embraced it almost-seriously. But this was no mere pantomime of dating ritual, not simply a crusty poke at female status. Citing ‘common law’, the Independent in 1908 proclaimed, “[A]ny man refusing a woman’s proposal on leap year shall give her a silk dress. Every maiden, widow or divorcee has, therefore, an opportunity this year to replenish her wardrobe even if she fails to satisfy her affections.” (The advertisement at top seems to reference this detail of the ritual.) 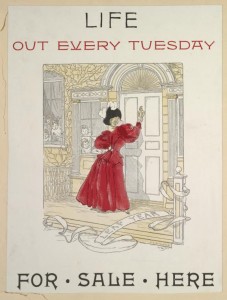 The tradition in 19th century New York was recognized enough that an uptick in advertisements from female suitors could be found in newspapers on that particular day. A reporter for the Times peers in on “the ladies of Harlem” in 1856 to discover “the fairer half of the assemblage asserted the prerogatives which Leap Year confers upon them to the fullest extent. They selected their own partners for the dance and very probably some of them exercised their privilege of choosing a party for life.”  There was even a well-received play by J.B. Buckstone which debuted in 1850 called ‘Leap Year – A Ladies Privilege’.

But was this ridiculous tradition ever really taken seriously? There was doubt, even in the Gilded Age. I mean, women proposing marriage? Can you imagine? “It seems almost incredible to us that there was a time when it was considered a humorous thing for a civilized community to assume that women were in the habit of doing what no woman is known ever to have done,” wrote a Times columnist in 1880

As with old customs, this might have been taken more seriously outside of major cities, as evidenced by this letter which ran in the New York Times in 1864: “A remarkable (Leap Year) courtship and marriage came off in our quiet village last week, resulting disastrously to all the parties concerned.”

For New Yorkers, Leap Day does not seem to have been a ‘holiday’ that received serious consideration. Among the upper crust, a woman’s proposal would have been scoffed at, regardless of the season, while it’s doubtful certain lower class women wouldn’t have waited for a calendar anomoly to do what she wished. If anything, the urban legend might have actually deterred potential marriage proposals. According to an 1884 article, “The ladies are afraid to marry this [leap] year because people will say they popped the question.”

Even William Jay Gaynor, mayor of New York 100 years ago, dismissed the custom and the women of New York in a single swoop: “I do not think women care about leap year. They can propose if they want to, but bless them, leap year or no leap year, they would rather have the fellow propose to them.”

Of course, I suppose some are trying to keep this weird custom alive even today.

I am glad to be living today. I am past 30 and single. In those days I would be written off! No stepping into a time machine for me!