Cookie heaven: Trains pull into a factory owned by the National Biscuit Company, between W. 15th and 16th streets, July 30, 1950. Could those cars be filled with crates of freshly made Oreo cookies? (See comments section below for the anser.) By 1958, the snack company had pulled all production from New York’s west side. Photo courtesy Ed Doyle/Flickr

PODCAST Welcome to our unofficial High Line audio walking tour! In our last podcast (episode #135), we gave you a history of the High Line, the one-mile linear park situated atop a stretch of abandoned elevated railroad tracks along the West Side. This time, I’ll take you on a tour along the High Line itself.

This will incorporate some history of the elevated line itself, but it’s geared towards describing the history of the surrounding neighborhoods. This is intended to be listened to as you walk along the High Line, beginning at the park’s southern entrance at Washington Street and Gansevoort Street in the Meatpacking District. We’ll end at 30th Street. This tour will last a little over an hour or so — depending on what speed you choose to enjoy the High Line. But take your time!

Along the way, I’ll share tales from almost 200 years of history, from the early days of Fort Gansevoort during the War of 1812 to the underground club life of the 1990s. Featuring New York stories of the Titanic, the Lusitania and the Manhattan Project. And starring a wild array of people who have influenced these neighborhoods, including Abraham Lincoln, Cornelius Vanderbilt, Drew Barrymore, REVS, Cass Gilbert, a feisty lady named Tillie Hart, and a whole lotta people dressed like Stevie Nicks.

ALSO: You might want a handful of Oreos after you’re done.

This tour covers two hundred years of history, starting with the construction of Fort Gansevoort, built to protect the city from potential attack during the events leading up to the War of 1812. (Courtesy NYPL) 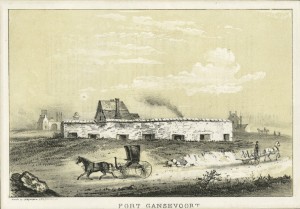 A map of the High Line, courtesy the Friends of the High Line. This walking tour follows this path directly from the southernmost entrance at Gansevoort Street, all the way up to W. 30th Street. 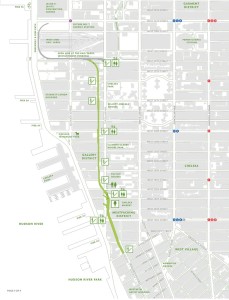 Although you won’t experience any vehicular traffic on this tour, please be aware of other visitors to the High Line as you listen. Stand over to the either side as you listen. There are some narrow paths, uneven walkways, benches and other nooks built into the surface of the High Line, so watch your step.

At the end of the tour I mentioned a Chelsea gallery tour that also provides a great perspective on the neighborhood while leading you through the scene’s best art shows. You can find more information about tours at New York Gallery Tours. In addition to the Chelsea scene, they also provide guided tours of the Lower East Side and Upper East Side art scenes.

CORRECTION: There is a very hilarious mis-statement near the end of the show. The Morgan Processing and Distribution Center is 2.2 million square feet, NOT 2.2 square feet. That would be the size of a flower box, I think. I’ve added the correction to the podcast show notes.

11 replies on “The Bowery Boys High Line audio walking tour, featuring tales of the Titanic, the Manhattan Project and 1,000 Stevies”

Love the walking tour – tho mine was virtual. Can’t wait to do the real thing when I am NYC in November

Even here in Belgium it’s a delight to listen. Google Maps works fine. Can’t wait for other tours.

That first image is really odd. Those are passenger cars. Why would they be going into a factory? Was there a caption to the photo?

Good question! The caption on Ed’s Flickr page says: “Railfan special on the West Side freight line at the Nabisco building on 10th Avenue. July 30, 1950.” I believe this might have been a special excursion train for railroad enthusiasts and not an actual passenger train.

really great walking tour, out of usuals cliches, follow on!

Excellent! Thank you so much!

Understanding providing Post! We value a person. We totally trust a person. In the event that all of us discuss present situation after that it’s should be revise. We loved reading through. I’d like to go to much more with regard to much more inquiries.
nyc holiday package tour

Awe-inspiring bequest! Your site is actually attention-grabbing. Personally i think love for this.
Travel with affordable honda suv in nyc

I just found your podcast, and literally walked the High Line while listening. The podcast was very inspiring…although a little dated…by almost 10 years.
You may want to do an update. Lol!

[…] mentioned in this episode of Out Travel the System:-an audio walking tour of the High Line-the history of four […]