The entrance to Rockaways’ Playland in the 1960s, one of the more nostalgic reminders of an era in the Rockaways gone by. (Image courtesy the blog Sand In Your Shoes)


PODCAST The Rockaways are a world unto its own, a former resort destination with miles of beach facing into the Atlantic Ocean, a collection of diverse neighborhoods and a truly quirky history.

Retaining a variant of its original Lenape name, the peninsula remained relatively peaceful in the early years of New York history, aland holding of the ancestral family of a famous upstate New York university.

The Marine Pavilion, a luxury spa-like lodging which arrived in 1833 featuring the new trend of ‘sea bathing’, opened up vast opportunities for recreation on the peninsula, and soon Rockaway Beach was dotted with dozens of hotels, thousands of daytrippers and a even a famous amusement park.

Not even the fiasco known as the Rockaway Beach Hotel could drive away those seeking recreation here, including a huge population of Irish immigrants who helped define the unique spirit of the Rockaways.

The 20th century brought Robert Moses and his usual brand of reinvention, setting up the Rockaways for an uncertain century of decreased tourism, urban blight and uncommon solutions to preserve its unique identity.

A zoning map of the Jamaica Bay region from 1937, featuring the Rockaway peninsula. A few interesting things to note about this, including: 1) no Idlewild Airport at this time, but Floyd Bennett Field was still in operation, 2) Rockaway Beach Improvement, 3) Everything west of Jacob Riis Park is basically ignored. [source] 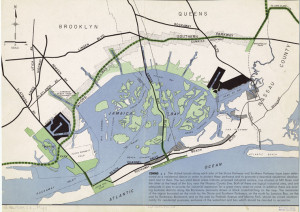 The Marine Pavilion, the first significant resort destination in the Rockaways, introduced the notion of sea bathing to New Yorkers and attracted famous writers and actors to this peaceful area. [Courtesy Rockaway Memories] 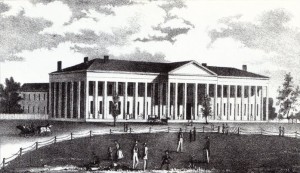 This is not an image from the Rockaways, but ‘bathing machines’ like these were most certainly used in the early days of Rockaway Beach. 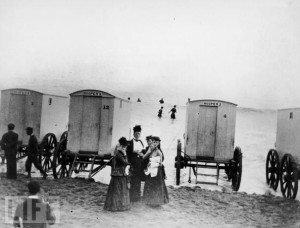 A couple examples of hotels that once filled the peninsula during the late 19th century, early 20th century, the Woodburgh House (at top) from 1870, the Kuloff (at bottom) from 1903. 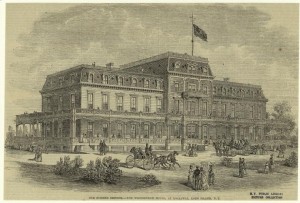 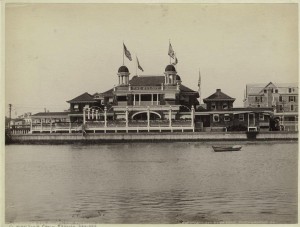 The boardwalk from 1903 in front of or near a section of Steeplechase Park, I believe, judging from the mini-railroad tracks along the side. [source] 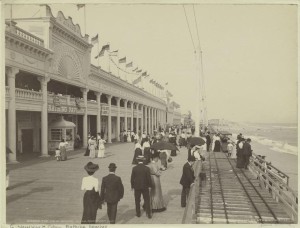 Along Seaside Avenue, possibly depicting an area of ‘Irishtown’, in 1903, rebuilt after a devastating fire the decade previous. 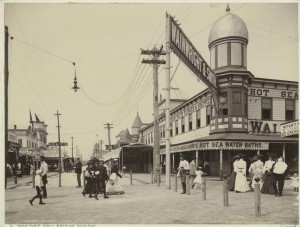 The bungalows of Rockaway. (Courtesy Library of Congress) 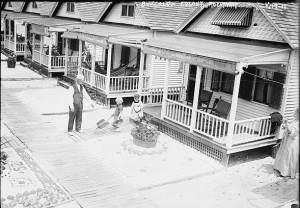 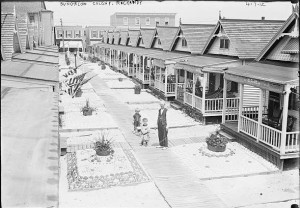 The 1950s began a long era of difficulties for the Rockaways, but you wouldn’t know it from this summertime Life Magazine photo from 1956. Click into the image to inspect some of the interesting and long-vanished shops and amusements along the boardwalk. 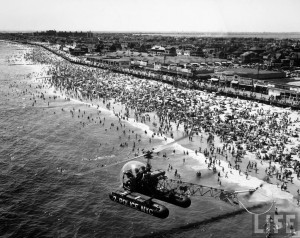 This almost-ghostly skeleton of a high-rise housing development never built stood for years as the residents of neighboring Breezy Point successfully fought to kill that project and other intrusive plans by the city in the late 1960s. Picture courtesy Arthur Tress/US National Archives. 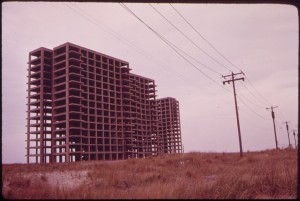 The mysterious remains of old Fort Tilden, now part of the Gateway Recreation Area and completely taken over by nature. For many more pictures of this area, please visit our Facebook page and check out my photo album on the ruins of Fort Tilden. 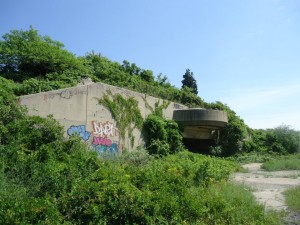 The thrashing waves of Rockaway make for good surfing:

And, what posting about the Rockaways would be complete without:

10 replies on “The Rockaways and Rockaway Beach: The strange fortunes of New York’s former resort oasis and amusement getaway”

nice posting.. thanks for sharing.

Hi Greg,
My name is Jane and I’m with Dwellable.
I was looking for blogs about Rockaway Beach to share on our site and I came across your post…If you’re open to it, shoot me an email at jane(at)dwellable(dot)com.
Hope to hear from you soon!
Jane

Interesting photos;esp. like the bungalows. some are still there and I have seen them (Before Hurricane Sandy).

Was catching up on your pod-casts; this was great to listen too. With respect to Robert Moses and Jacob Riis Park; I think you are perpetuating a distorted view of his role in the park’s creation. It was my understanding from the NPS, that the main bath house was built prior to Moses’ arrival and the creation of the City’s Park Service. The original developers had actually put the original parking lot on the sea side of the bath house heading east. Moses was responsible for everything west of the bath house and the smaller pavilion area. Moses also recognized the importance of recreation and built the massive parking lot and cleared the boardwalk area for recreation facilities. After Sandy, remnants of the original parking were found among the displaced sand that washed ashore

Spent every summer of my life at Beach 48th St. Rockaway until the 1960s, many photos. All bungalows torn down for no reason. Used to go on the boardwalk up to B98th St. for Playland and down towards Far Rockaway for the arcades and the fireworks. Where exactly was the Bowery in Rockaway? I have seen photos from Shorpy.com but not sure where exactly that would have been.

Interesting show.
Those structures out at fort tilden are “pill boxes” for machine gun mounts. As I understand it the fort was the first line of defense for new York during world war 2.
In fact I think a uboat was spotted off of rockaway? I think spies used to come ashore there? That might just be from the movie Radio days by woody allen.
Lots of media mentions of the rockaways like in seinfeld, the flintstones, mad magazine, etc.
Breezy point was known as a “restricted” neighborhood which explains why it is the whitest neighborhood in nyc.
I think I heard caruso had a home in Bayswater, my neighborhood..
Thanks for doing this.

I grew up in Belle Harbor with two brothers and two sisters. It was the best childhood we could ever have imagined! Thank you for sharing!

I grew up on Beach 32nd St in the early 1950’s to the mid 1960’s. I remember all the bungalows that were only occupied in the summers. The boardwalk was a place of wonder to a child. It’s hard to see all the vacant lots in the wonderland where I grew up.