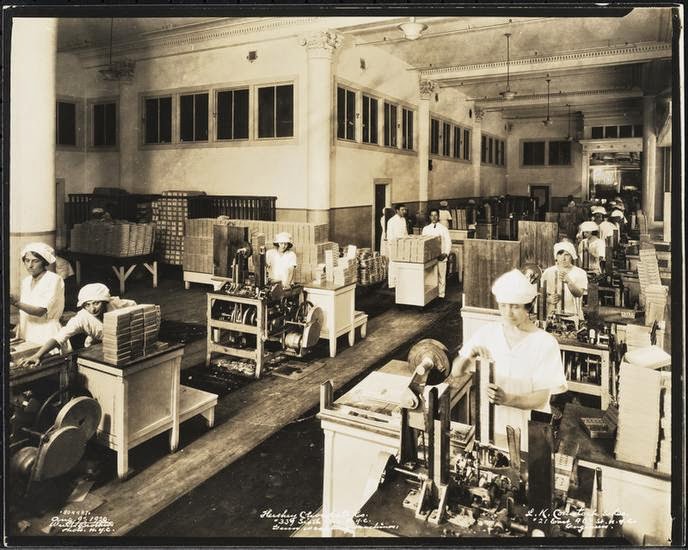 For five glorious years in the early 1920s, Hershey’s Chocolate operated a candy plant at Sixth Avenue, in the neighborhood of Chelsea. While chocolate bars and chocolate coating for other candies were produced here, the Chelsea plant primarily focused on a new confection, one that ultimately failed — Hershey’s Chewing Gum.

But let me back up. The grand building that sits there today — one of the prominent members of Ladies Mile Historic District and the current home of Trader Joe’s — was originally built for the department store Adams Dry Goods.  Founded in the mid-1880s, Adams Dry Goods had been slowly expanding along this block, enjoying a surge of business thanks to the Sixth Avenue elevated train.

Below: The Adams Dry Goods building in 1978 (photo by Edmund V Gillon, MCNY): 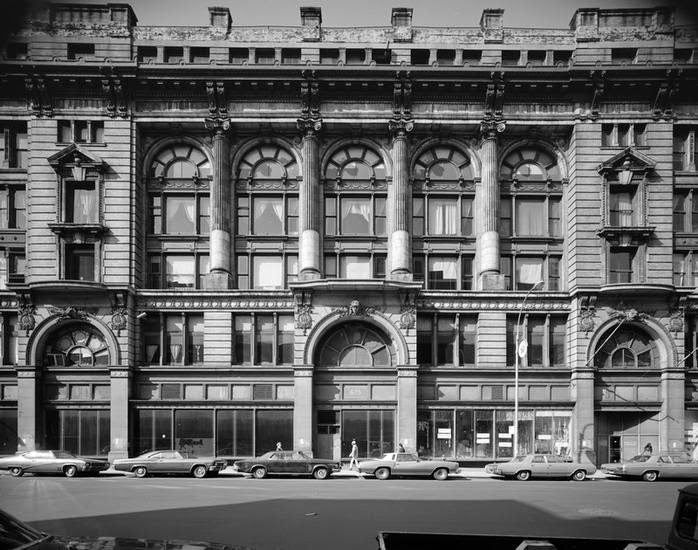 Other department stores sprouted up along the street, most notably the Siegel-Cooper department store in 1896.  (That building is home today to Bed, Bath and Beyond.)  Siegel-Cooper was a sparkling Beaux-Arts treasure, 750,000 square feet with dozens of departments for shoppers, and its ambition and size drew headlines and the curiosity of New Yorkers.

Naturally, Samuel Adams, the proprietor of Adams Dry Goods, wanted to compete with this retail behemoth, so in 1899 he hired Siegel-Cooper architects DeLemos & Cordes to design a massive new store with an opulent interior central court.  Large second floor windows offered views to elevated train passengers of the store’s most notable trade — men’s clothing.  (Much of Ladies Mile, in contrast, catered to women.)

Below:  Adams Dry Goods today. After a period in the 1990s-2000s as a Barnes and Noble bookstore, today it holds a Trader Joe’s: 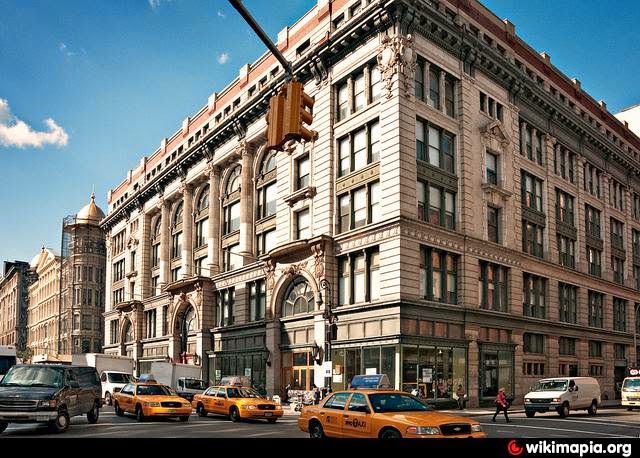 But Adams’ timing was rather poor.  For just a few years later, the more successful department stores (including Lord & Taylor and B Altman) fled to Herald Square and Fifth Avenue.  Hugh O’Neill’s, the department store one block south, bought Adams Dry Goods and prepared to merge the businesses, even planning an underground tunnel under West 21st Street to link to two large structures.  This never came to fruition, and both O’Neill’s and Adams Dry Goods went out of business for good.

The abandoned building was briefly used by the US Army for storage before being acquired by a most unusual new tenant — Hershey’s Chocolate. 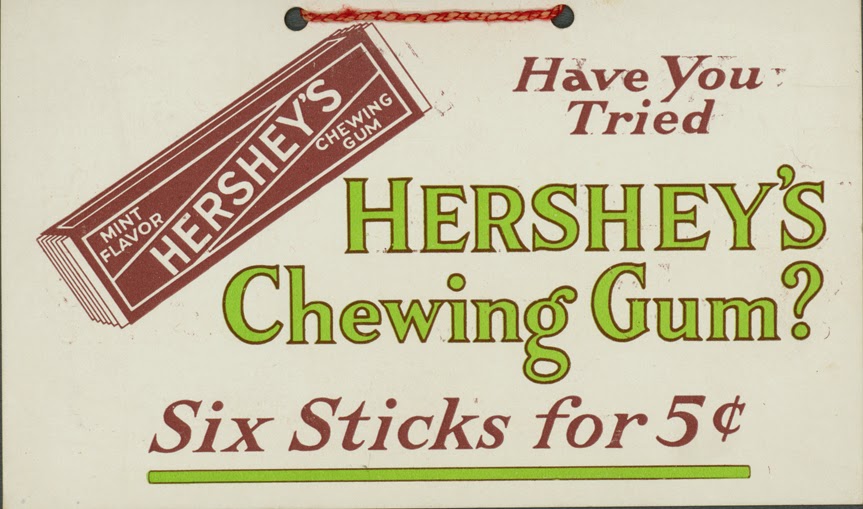 Candy man Milton S. Hershey had been successfully manufacturing treats in his hometown of Derry Church, Pennsylvania (which now took the mogul’s name — Hershey) and was looking for a another hit after the success of the Hershey’s Kiss.  He thought chewing gum was the logical next step.

In New York he bought some gum-making equipment and had it shipped to his Pennsylvania plant where production began on Hershey’s Chewing Gum. “Six sticks for a nickel” went the slogan.

In January 1918, Hershey leased Adams’ former department store on Sixth Avenue and eventually moved elements of his candy production there, including his entire chewing gum business.

I haven’t been to locate the exact reason why.  Early in his career, Hershey operated a candy shop on Sixth Avenue and 42nd Street, and his wife had been a clerk at B Altman’s a few blocks down.  With his chief competitor Wrigley’s located in Chicago, perhaps his return to New York was his official stab at planting roots in an urban market.

Soon the Sixth Avenue shop was whirring with the sound of boilers, mixers, candy presses and wrapping machines, sending out five thousand boxes of chewing gum a day, and a lesser amount of other candy items.  Wheat was carried in from the Pennsylvania plant and added to the gum to make it more chewy.

As you can see here, the implements of candy-making fit oddly into the cavernous Sixth Avenue department store: 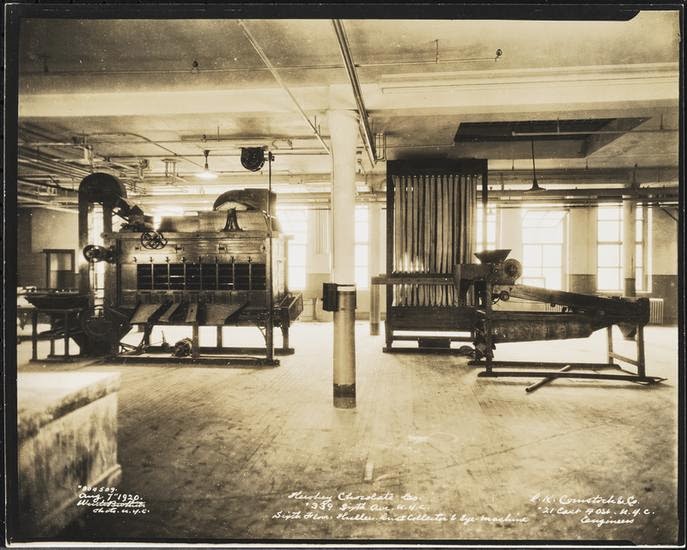 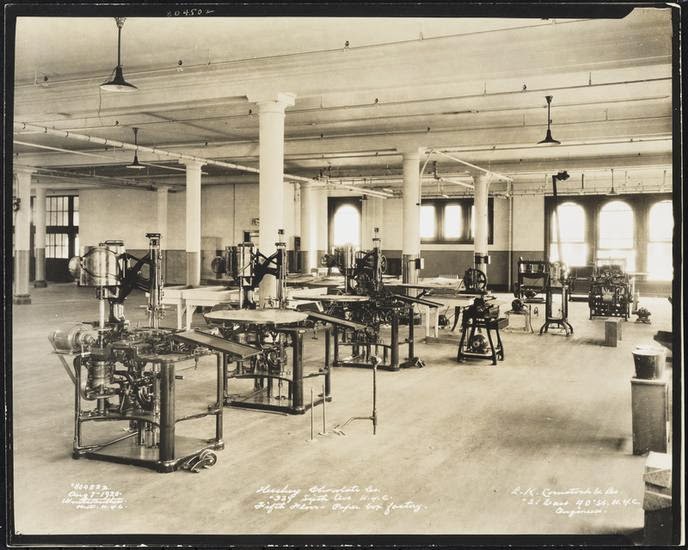 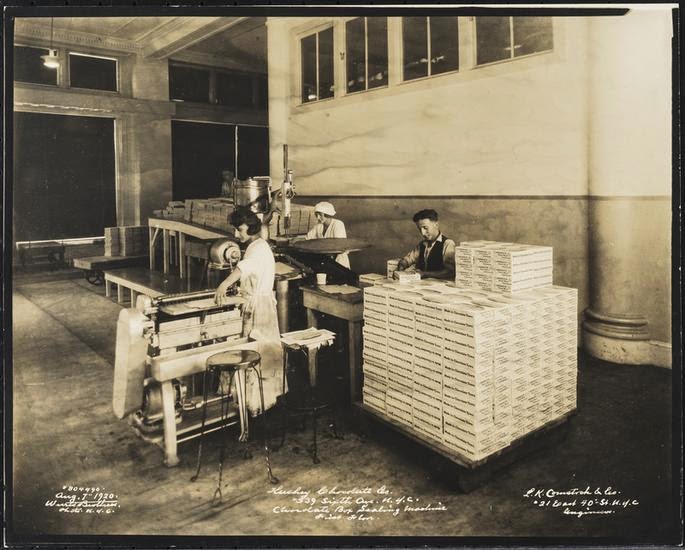 Sadly, future residents of Chelsea would be robbed of the delightful aromas of chicle and chocolate, as Hershey’s chewy offering did not take off.  With raw ingredients being hard to obtain in the early 1920s, the product was discontinued, and Hershey eventually closed the plant in 1924.

However I’m sure you can buy gum at Trader Joe’s that currently occupies the building.