Above: The Third Avenue Line as it looked running along the Bowery, changing the nature of New York street life, even as its innovations helped expand the city.

PODCAST Before there were subways, New York City transported travelers up and down the length of Manhattan by elevated railroad, an almost unreal spectacle to consider today. Steam engines sat high above several avenues in the city, offering passengers not just a faster trek to the northern reaches of Manhattan, but a totally new way to see the city in the 19th century.

Welcome to our second podcast in our series Bowery Boys On The Go, a look at the history of New York City transportation. Before we get to those famous ‘El’ trains, we explore the earliest travel options in the city — the omnibuses and horse-drawn rail cars, the early steam successes of the New York and Harlem Railroad and Hudson River Railroads, and something affectionately nicknamed the one-legged railroad.

What were some of the more peculiar ideas for improving travel? And why was the idea of a subway immediately shot down by the city? Let’s just say — Boss Tweed and Jay Gould are involved.

ALSO: What were the different motivations driving transportation progress in the city of Brooklyn? Well, it has something to do with the beach. 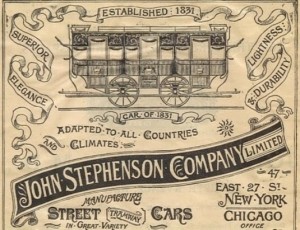 Charles Harvey developed the first elevated system for New York, essentially a cable/pulley system that stretched along the west side from the Battery. Below, Harvey gives his ‘one-legged’ line a tryout in 1867. (Pic courtesy Merritt Island Subway South) 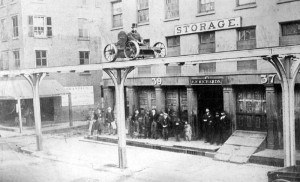 Rufus Gilbert, a Civil War physician, turned to trains after the war and dreamt up an imaginative pneumatic system, to zip passengers above the city in Gothic-themed arches. Gilbert was given the go-ahead to construct this oddity, but the love for steam and a financial crisis transformed the idea into a steam elevated line instead. (Courtesy Columbia U) 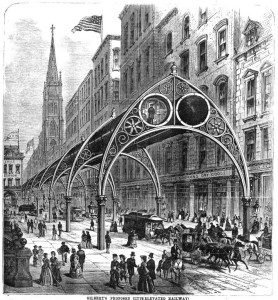 Ladies Mile along the Sixth Avenue elevated line. The trains might have made the city expand outwards, but it also made the streets smaller and darker. (Original pic from Shorpy) 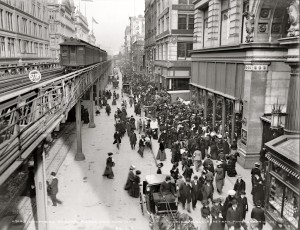 The Third Avenue line, where it ran alongside Cooper Union and traveled south down through the Bowery. This intersectioni today still sits rather wide and empty, a vestige of the days when tracks hovered above the roads. [NYPL] 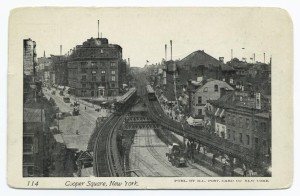 An ornate station for the Ninth Avenue line, at Christopher and Greenwich streets in the West Village. 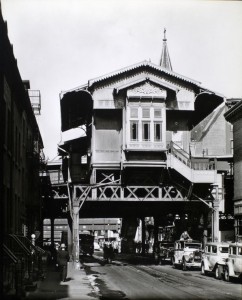 The Brooklyn and Jamaica Railroad, the precursor to the Long Island Railroad. The section illustrated here is along Woodhaven Boulevard, but much of the line went along Atlantic Avenue.

9 replies on “New York City’s Elevated Railroads: Journey to a spectacular world of steam trains along the avenues”

Great pictures. It´s also interesting to imagine what a completely different view pedestrians had, not just along the Avenues, but along the streets as well. Looking east and west, Manhattan did not look “endless” as it does now, especially where the stations were. If only somebody had taken some good videos while walking in say 1900…

Great pictures. It´s also interesting to imagine what a completely different view pedestrians had, not just along the Avenues, but along the streets as well. Looking east and west, Manhattan did not look “endless” as it does now, especially where the stations were. If only somebody had taken some good videos while walking in say 1900…

Fr. Tim,I am absolutely certain that this clicofiratain has been motivated in part by upward feedback from the Catholic blogosphere. Keep up the good work!PS: the quality of the English makes me think it came straight from the pen (or, dare we hope, the keyboard) of Cardinal Levada.

Thank you for the tip, Georgia. Also: just checked out your blog, very interesting!

This was by far the most interesting podcast! And really amazing pictures. Do you think it’s possible to add a map with the routes?

Any idea what the source is of the first elevated rail image, looking up the Bowery? It’s similar to a John Loeffler photo in the NYPL collection, but not identical.

This links to an article in a publication “Saint Nicholas”. It was written from the perspective of two boys who moved to NYC near the Bowery and watched with fascination the construction of the elevated railroad. http://books.google.com/books?id=n08FAAAAQAAJ&pg=PA800&dq=st.+nicholas+railroad+barnard&hl=en&sa=X&ei=2y54UaTeOJLr0QHtuoGICA&ved=0CDIQ6AEwAA#v=onepage&q=st.%20nicholas%20railroad%20barnard&f=true

Great story, thanks. Imagine kids reading that much in 1879. We sure have fallen down, haven’t we?