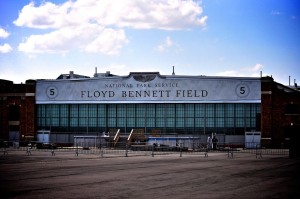 Since I’m in a transportation history mindset this summer, I’ll be making it a personal mission to visit a lot of glorious New York ruins with that theme. Staten Island boat graveyard, here I come!

But my first stop was a couple weekends ago, exploring the grounds of Brooklyn’s old Floyd Bennett Field, New York’s original airstrip and the first municipal airport. The area had been a private dirt airstrip for many years before 1930, when aviator Clarence D. Chamberlin received permission from the city to build lavish new facility here. 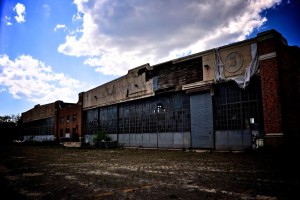 Over the years, the field (named for a Brooklyn pilot and adventurer) saw the greats of aviation — Amelia Earhart, Wiley Post, Howard Hughes, John Glenn — and the most revolutionary of small aircraft. It was later turned into a base for the Marine and Naval Air Reserves and decommissioned and handed over to the national parks department as part of the Gateway National Recreation Area in 1972.

For more information, you can listen to our podcast on LaGuardia Airport and the early years of New York City flight. [Download it here or from iTunes]

Today many of the old hangars sit like broken, ghostly relics, presiding over empty fields and a vast airstrip slowly being taken over by plant growth. The north end of the field is still very much in use, with a recreation center featuring an ice skating rink, gymnasium and rock climbing wall, and a football field outside. There was a cheesy carnival set up when I visited. And next to the withering airstrip is Brooklyn’s largest community garden.

But the star of the show are those unused hangars filled with strange rubble and unidentifiable, rusted machines, broken windows sending light beams at stark angles. You can’t go inside them, but you can get extraordinarily close. 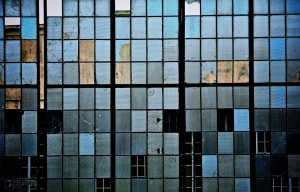 For a lot more information, I recommend checking out Forgotten NY’s detailed exploration of the site. You can check here for directions to the field, including by subway (the 2 train and a bus ride).

The photos on this page are by Sean Nowicke, a wonderful photographer who has more pictures of our trip there on his blog. He’s a world traveler and has a lot of fantastic photos of other places as well — check them out at Buzzstew.