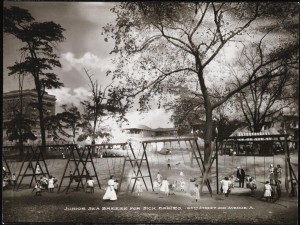 A particularly haunting image — the caption “Junior sea breeze for sick babies — 64th Street and Avenue A.” Circa 1895, this was taken in a park at 64th and today’s York Avenue, the area of Rockefeller University.  On this 1899 map, you can see that the future Sutton Place and York Avenue were still referred to as Avenue A then.  By the 20th century, the lettered avenues were so synonymous with poorer immigrants that the upper portions were renamed to appeal to wealthier residents.   (Picture courtesy Museum of the City of New York)


Food Fight:  Junior’s Restaurant, the legendary Brooklyn restaurant on Flatbush Avenue, rejects lavish cash offers to remain in the same spot. “This is Junior’s identity, is this building. This is the one where I came on my first dates. It’s where my family spent most of their waking hours … Not the one down the street, not the one below 20 stories of condos. This one.” [Curbed]

Reinventing the Sandwich:  The rise and fall of the panini in New York City [Gothamist]

The Glow of the City:  A look at the dreamlike photography of pictoralist Alvin Langdon Coburn. [Ephemeral New York]

Beautiful Trash:  And another photographer from a different era — Mike Frey and his black-and-white take of New York in the 1970s. [Jeremiah’s Vanishing New York]

I Want To Go To There: And speaking of great photographs, my favorite Instagram account of the moment is by Rolando Pujol who finds the most remarkable examples of Americana restaurant signage in New York.  I want to eat ice cream at all of these places.  Follow him there or check out his blog. [The Retrologist]

Meanwhile, if you’re watching The Knick or Boardwalk Empire, follow along with me on Twitter (@boweryboys) for some extra trivia about the historical eras being depicted.  I’m trying to avoid actual spoilers at all possible, although sometimes history itself provides the spoiler as with the murder of this prominent mob boss.  Here’s a few example of Tweets for this weekend’s episodes:

‘Be Honest and True Boys’, a poem from this 1887 issue of Golden Days: #BoardwalkEmpire http://t.co/IDPRD1lkyj pic.twitter.com/6BwCaVNACe
â€” The Bowery Boys NYC (@BoweryBoys) September 8, 2014

Hats, hats, and hats. As a fun comparison of fashion, here’s a lineup of men’s looks from 1899: #AtTheKnick pic.twitter.com/NfDT2tgl5w
â€” The Bowery Boys NYC (@BoweryBoys) September 6, 2014