With major improvements in plumbing and home design, private ‘rain-baths’ or showers began to be installed in the wealthier American homes. This is a New York Times advertisement from November 11, 1914 for a Kenney Needle Shower which inundated the body with water from multiple showerheads. 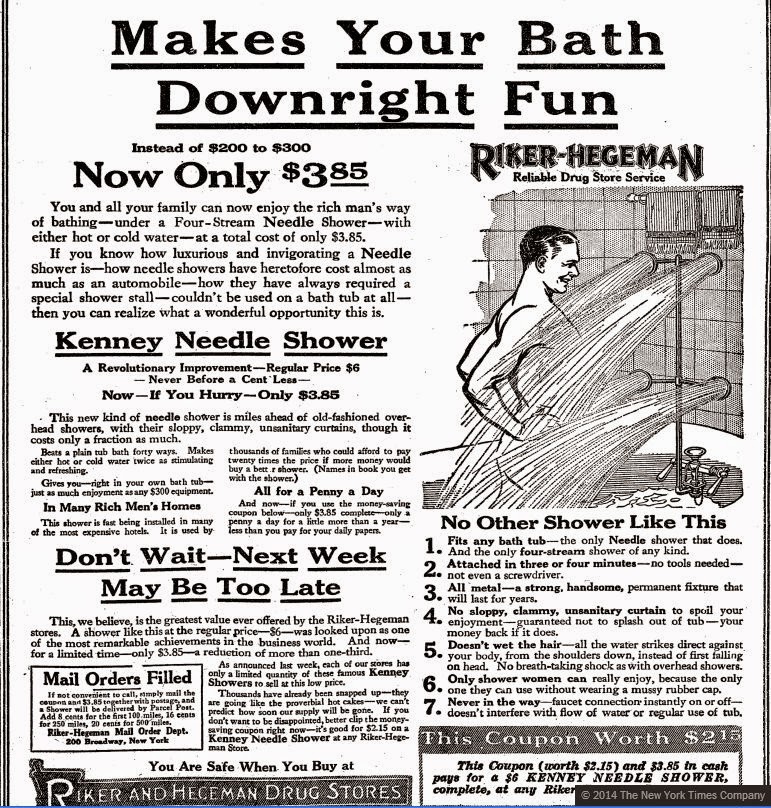 The modern form of shower was once referred to as a “rain bath”, invented in Europe in the 19th century.

From a 1908 journal called “Modern Baths and Bath Houses“:

“The rain bath is the most important form of cleansing bath, from a hygienic point of view, hence it is deserving of special attention. Â Since the first introduction, about the year 1883, of the so-called ‘rain baths’ in Germany, I have followed with keen interest and close attention the gradual development and rapid spread of this new system of baths.

In the modern ‘rain bath’ system …. tubs are entirely abolished, simple spray or shower baths being substituted for the same, and being installed in the bath compartments as a distinct and independent form of bath. Â

One feature of construction, which is novel and of much importance, is that the shower or spray in placed at an inclined angle in the rain bath, the object being to avoid a vertical stream from the shower striking the head of the bather, which to many person is quite disagreeable. Â In the new form of rain bath .. the lukewarm water strikes the body only from the neck downwards, and the head is not wetted, except when the bather purposefully places the same under the descending shower of water.” 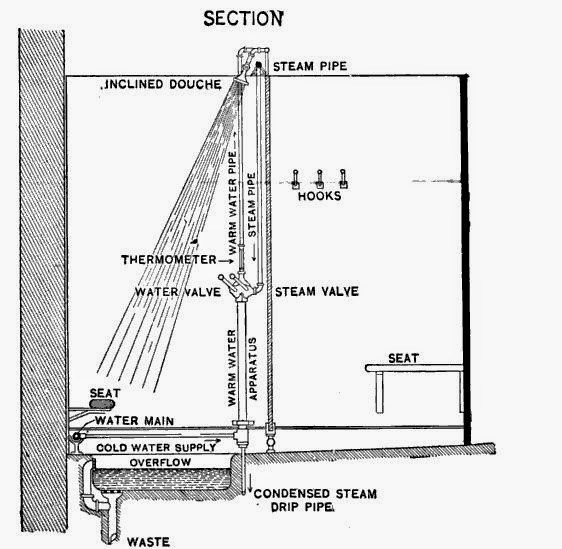 The very first ‘rain bath’ installed in New York, according to the 1908 journal, was at the New York City Juvenile Asylum, located at 175th Street and 10th Avenue. (Pictured below.) Delinquents taken to the asylum were stripped of their street clothing and thrown into the new showers, then provided proper uniforms. Â After what appeared to be a successful trial upon these poor children, rain baths were installed in public hospitals and bathhouses throughout the city. 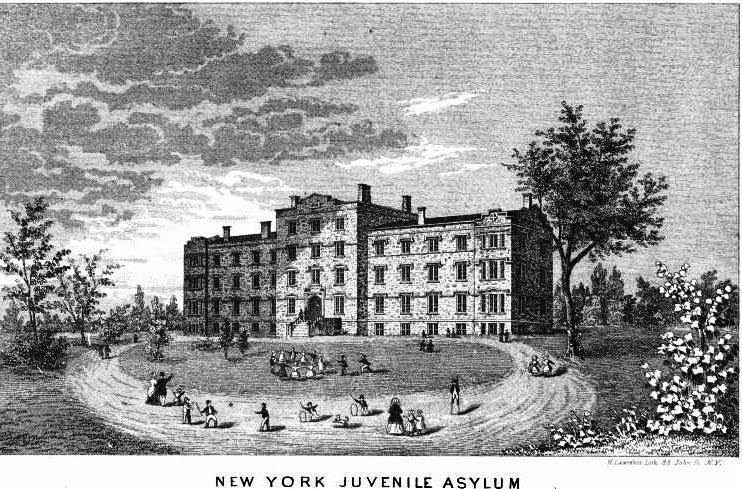 Private application of this technology, however, took a bit longer to catch on. Â Home installations, such as the ones illustrated at top, came with the advent of improved apartment living in the early 20th century.

Apparently there was some concern that the rain bath could be successfully applied to private dwellings that weren’t for the wealthy.

“[T]he middle classes who, in New York City, for instance, are largely compelled to live in flats or apartment houses (the higher-sounding name for improved tenement houses), have, with rare exceptions, only a narrow, dark and generally uninviting bathroom, and the mistake is usually made by architects or buildings of locating the water-closet [toilet] almost invariably in the same room.”

Imagine, putting the shower in the same room as the toilet!

Its funny how advertisements were so much cooler back in the 20’s-50’s. Just looking at those ads makes me feel like “oh the good old days”… although I was born way after that.

Either way, rain showers rock! I just bought mine from Amazon.

I think it was made by Moen.