“The Raven” was first published in the New York Evening Mirror on January 29, 1845, and would come to define the morbid brilliance of its author Edgar Allan Poe.

Poe and his sickly young wife Virginia arrived in New York in 1844, lodging at a dairy farm at today’s Â West 84th Street, between Broadway and St. Nicolas Blvd. (While blocks would have been marked by the Commissioners Plan in the 1810s, there would have been little development here.) Â It’s widely believed that Poe “composed, or at very least, perfected” the poem in New York.

Here’s another angle of the house in a fanciful illustration highlighting the very bucolic nature of the area then.

The blog Manhattan Past has an excellent post on the supposed whereabouts of the Brennan farm. Although he lived here for a short time, the street today is ceremoniallyÂ referred to as Edgar Allan Poe Street. Â The street was officially given that distinction in 1980 and for many years presented misspelled street signs — “Edgar Allen Poe Street.”

A few days later after the poem’sÂ debut in the Evening Mirror, on February 4, the New York Daily Tribune also published “The Raven”. Â Here’s how it first appeared in the Tribune: 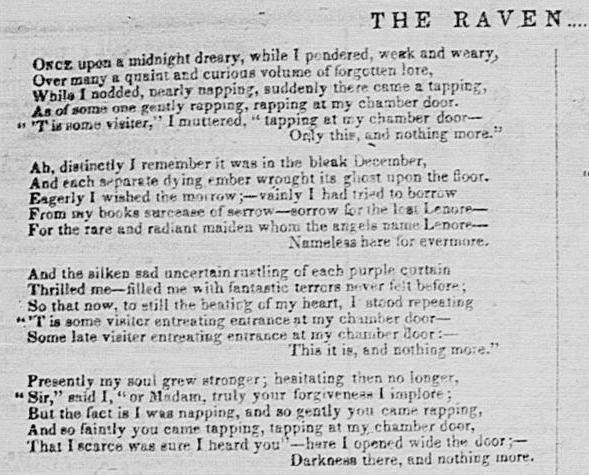 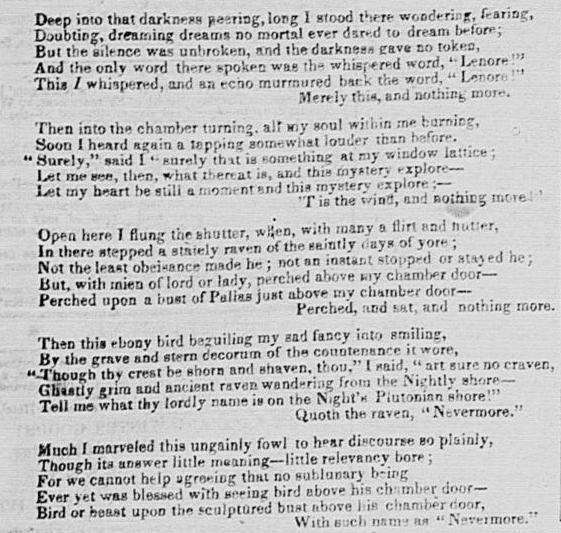 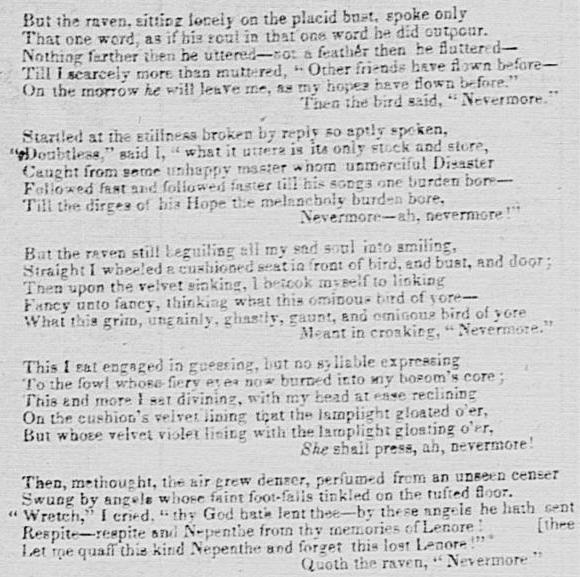 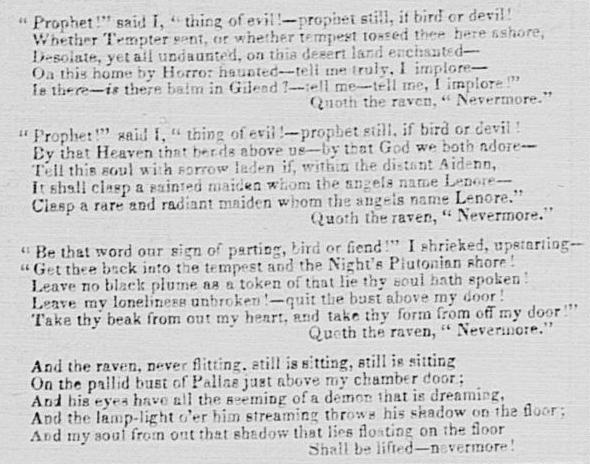 It was then published in the Broadway Journal, a couple of weeks before Poe became editor of thatÂ publication. Â The venture however was a financial failure. Â In 1846, he and Virginia moved to a farm-house in the area of Fordham (in the Bronx) which is still preserved today.

Poe hoped living farÂ from the bustle of New York would help his wife; but she died here in on January 30, 1847 — almost two years to the day after the publication of “The Raven.”

At top: “The Raven” from the original illustrations of Edouard Manet

1 reply on “The Raven by Edgar Allan Poe, published 170 years ago today”

Love these very funny guys. They are like extended family in our home. They are so intuitive and are able to really get into the minds & hearts as well as plots and ( tastefully presented) often juicy sub-plots of each character they present. And then they never fail to please with that great disarming humor and charm. We enjoyed hearing about the French wedding and just really enjoy the whole package.
Keep it comin’.
And many thanks.
SUZ & Co.