PODCAST Part Two of our two-part series on New York City in the years following the Revolutionary War.

During a handful of months in 1789 and 1790, representatives of the new nation of the United States came together in New York City to make decisions which would forever affect the lives of Americans.

Related: Listen to Part One of the series here.

In this second part of our two-part show on New York as the first federal capital of the United States, we roll up our sleeves and get down to business. (In the first part, he moved the capital to lower Manhattan and inaugurated ourselves a new president George Washington!)

The men of the first Continental Congress — which first met in the Spring of 1789 — had a lofty job in front of them that year. They needed to not only construct the tools and offices of a brand new government, they were also tasked with defining the basic rights of American citizens via a set of amendments to the U.S. Constitution — the Bill of Rights.

Now imagine doing this in your post-Colonial era garments during a hot summer, all crammed into a few rooms at Federal Hall, the former City Hall building on Wall Street.

It was here that the Bill of Rights was introduced, debated and voted upon. But those weren’t the only monumental decisions being made in the city.

When nobody could come to an agreement on two major issues — the assumption of state debt and the location of the permanent federal capital — it was up to Thomas Jefferson, Alexander Hamilton and James Madison to craft a deal, made during a legendary dinner party on Maiden Lane. We live today with the critical decisions made by these three men on that night over food and wine.

ALSO: The tale of James Hemings, an enslaved man who became an accomplished French chef and most likely theÂ cook for that very dinner, witness to the events in “the room where it happened.”

The setting for much of our show today is Federal Hall, the former City Hall turned headquarters of burgeoning American government.

It was demolished in the 1810s and replaced many years later with the U.S. Customs House (later the Sub Treasury Building).

Alexander Hamilton, the first head of the Department of Treasury and one of the architects of the Great Compromise of 1790.

Thomas Jefferson (depicted here in a pose as the third President of the United States) was America’s first Secretary of State and was instrumental in pulling together the ingredients of the Great Compromise.

It’s likely that James Hemings, the brother of Sally Hemings and an enslaved man owned by Jefferson, served the meal that evening in ‘the room that it happened’, aka the Great Compromise.

An inventory of kitchen tools written out by Hemings that he used at Monticello. More details on Hemings here.

A plaque marking the spot on Maiden Lane where Thomas Jefferson’s house once stood.

The sizable home of Alexander Macomb who rented half his house to George Washington in 1790. In addition to his offices and household, many of his enslaved people worked here as well. 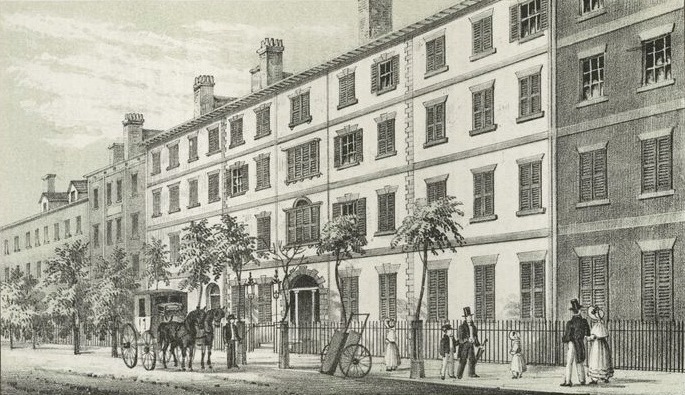