PODCAST One of the great narratives of American history — immigration — through the experiencesÂ of the Irish.

This diverse and misunderstood immigrant group began coming over from Ireland in significant numbers starting in the Colonial era, mostly as indentured servants. In the early 19th century, these Irish arrivals, both Protestants and Catholics, were already consolidating — via organizations like the Ancient Order of the Hibernians and in places like St. Patrick’s Cathedral.

But starting in the 1830s, with a terrible blight wiping out Ireland’s potato crops, a mass wave of Irish immigration would dwarf all thatÂ came before, hundreds of thousands of weary, sometimes desperate newcomers who entered New York to live in its most squalid neighborhoods.

The Irish were among the laborers who built the Croton Aqueduct, the New York grid plan and Central Park. Irish women comprised most of the hired domestic help by the mid 19th century.

The arrival of the Irish and their assimilation into American life is a story repeated in many cities. Here in New York City, it is essential in our understanding of the importance of modern immigrant communities to the life of the Big Apple.

PLUS: The origins of New York’s St. Patrick’s Day Parade!

St. Patrick’s Old Cathedral, the embodiment of early Irish pride in New York. Below: A photograph by Edmund Gillon from 1975. 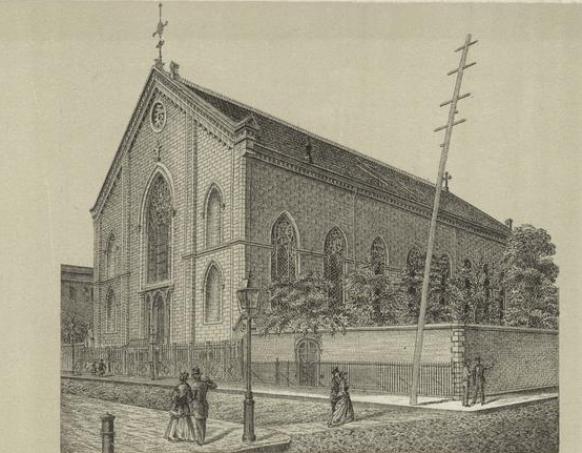 A lithograph by Maurer and Currier (of Currier and Ives) illustrating a rather stereotypical scene of Irish life. 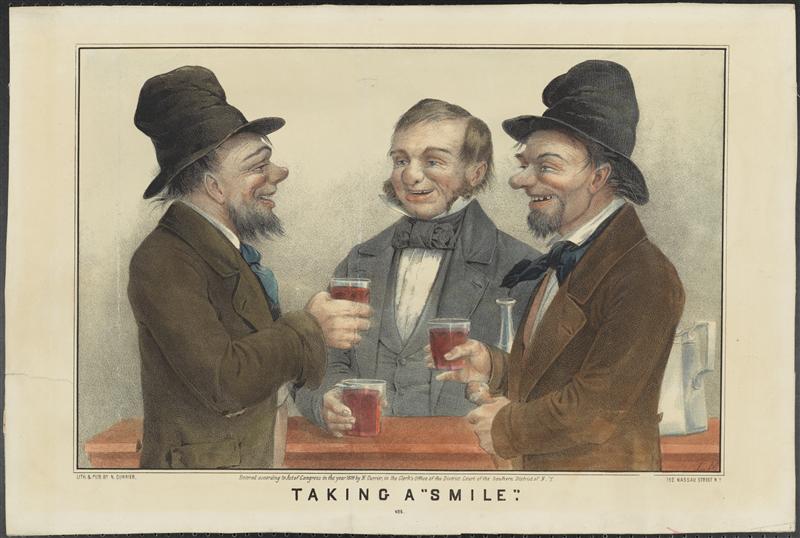 An anti-Catholic illustration from 1855.

In 1860, fear of foreigners inspired a San Francisco cartoonist to draw this image, imagining laborers from Ireland and China (responsible for building the railroads) ‘swallowing’ up the country. A mixed Irish/Chinese caricature completes the job.

St. Patrick’s Cathedral on Fifth Avenue, a new signpost for the acceptance of the Catholic religion in America, sits alongside acres of hot real estate in 1905. Its neighbors would slowly transition from luxury manors to upscale shops and department stores.

By 1872, you were seeing much more thoughtful depictions of Irish Americans such as this one Â by Duval and Hunter. “Print shows a mother pinning clover on her son’s suit lapel, on the right is a young girl standing at an open window waving a banner “God save Ireland.” A domestic scene in a palor with a sewing machine on the left.”

The departure of the 69th Infantry Regiment, the ‘Fightin’ Irish’ brigade headed to the battlefields of the Civil War. Lithograph dated 1862. 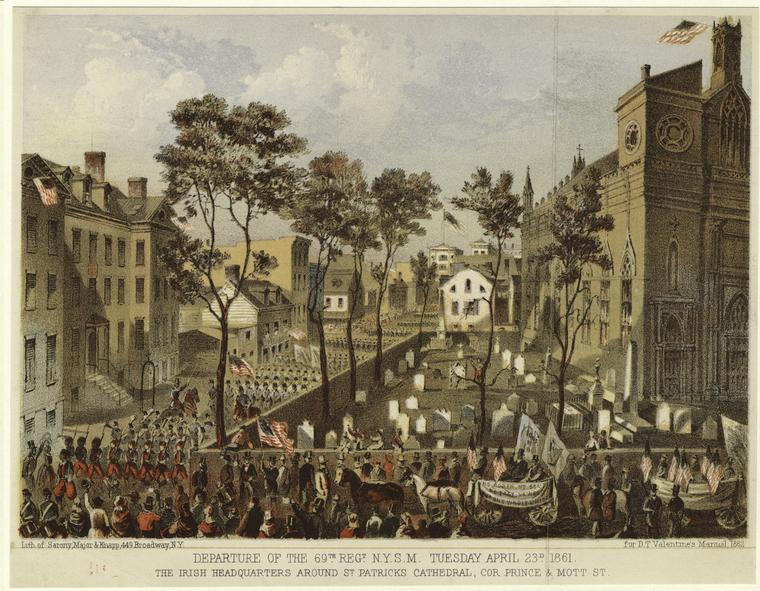 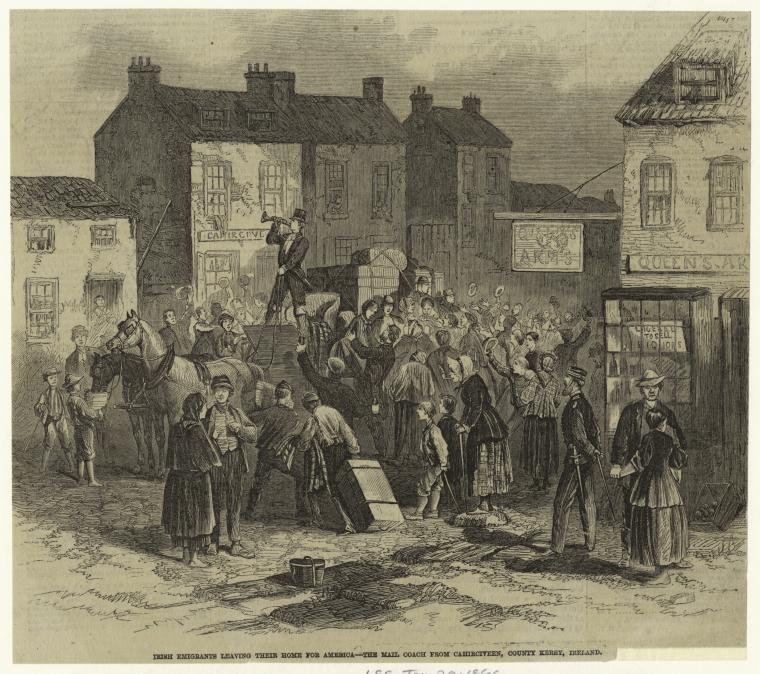 From a Harpers Weekly article from 1874 — leaving Queenstown (today’s town of Cobh) for New York.

The insanity of Castle Garden, the prime immigration station in New York in 1880, before the construction of Ellis Island. Below that, registering names at Castle Garden in 1871. 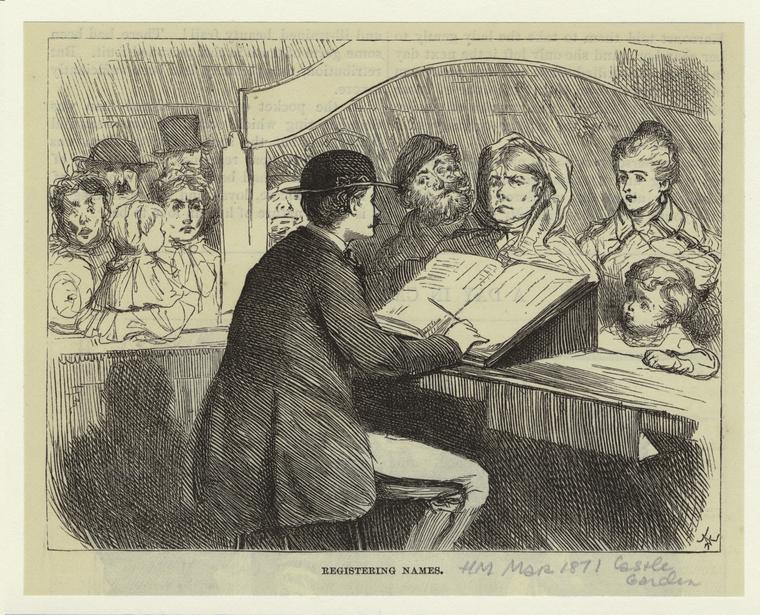 The hazards of immigrants leaving Castle Garden, as vividly illustrated by Puck Magazine. 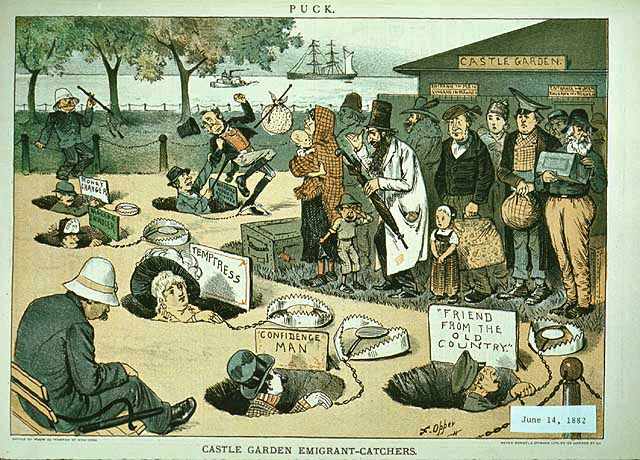 The flow of immigrants were better accommodated by Ellis Island, pictured here in 1907. 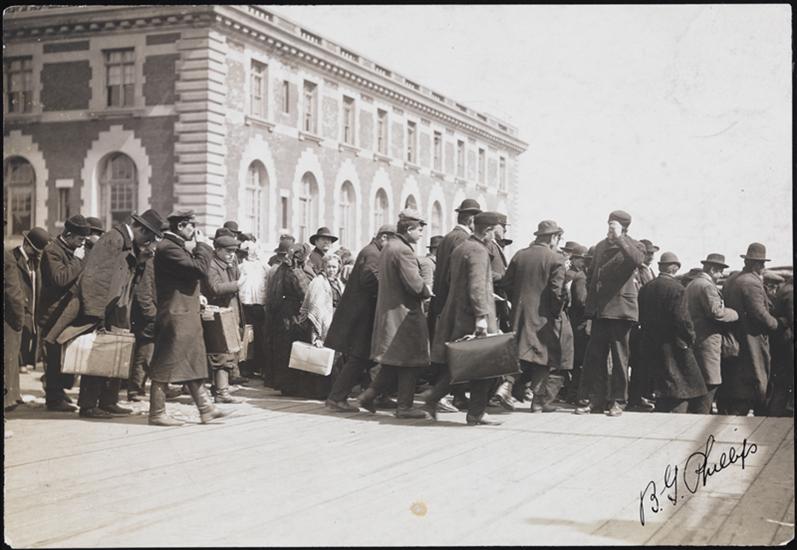 Irish women line up at the Emigrant Savings Bank, withdrawing money to send back to relatives in Ireland. (1880)

Irish vaudeville often poked fun at their own stereotypes — and promoted many others. This 1880 Harrigan and Hart sketch was called ‘Ireland vs Italy.’

An 1886 cartoon by Bernard Gillam, illustrating the Tammany Hall tiger with Irish accoutrement.

‘Professor’ Mike Donovan, an Irish-American boxer who performed out west then became a boxing instructor in New York up until his death in the Bronx in 1918.

A typical example of an Irish-themed song from the Gilded Age, of the type which is obviously playing with some stereotypes of Irish people. 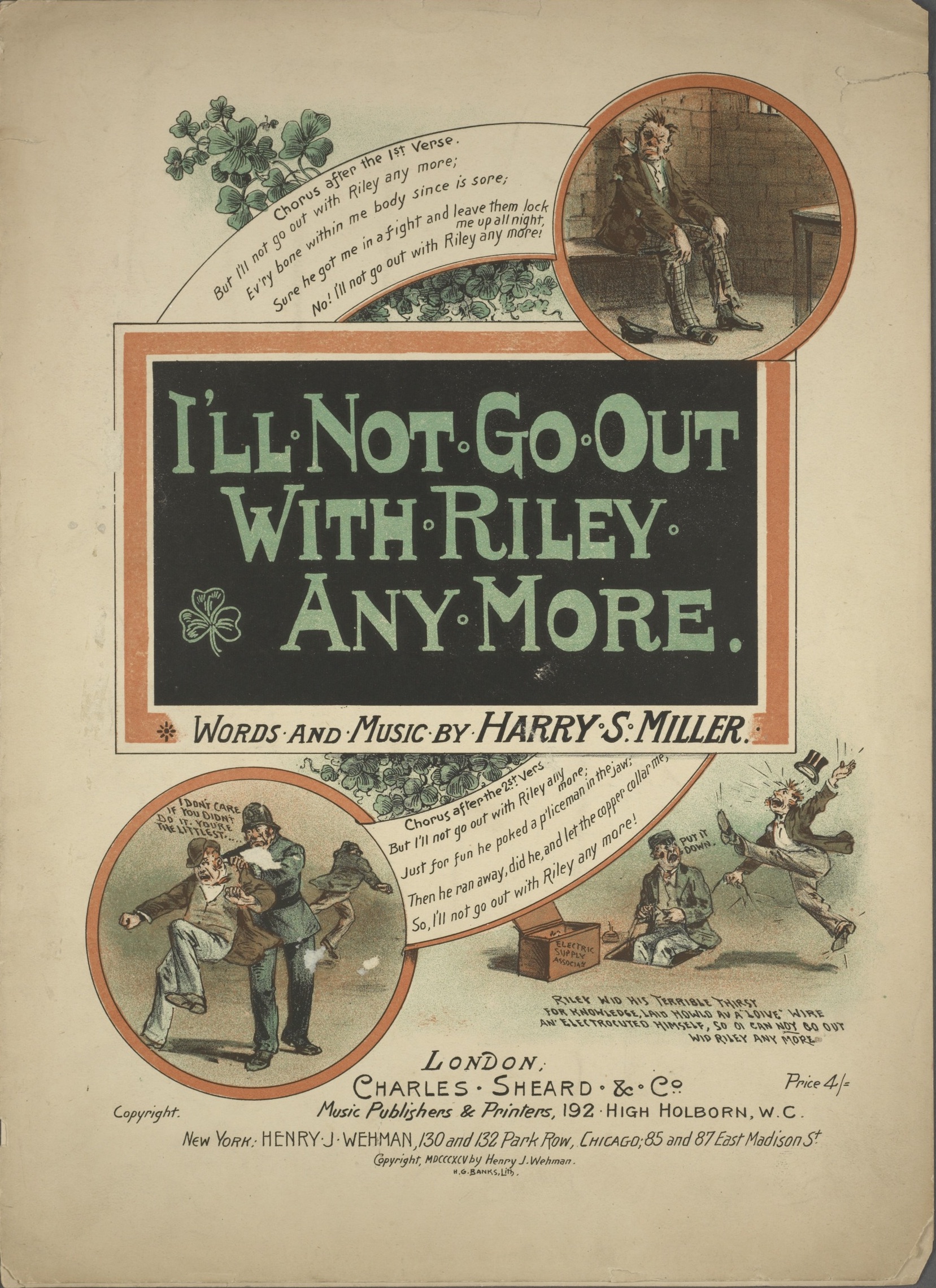 By 1895 the St. Patrick’s Day Parade is a genuine event, drawing New Yorkers of all kinds. These pictures are along 57th Street. 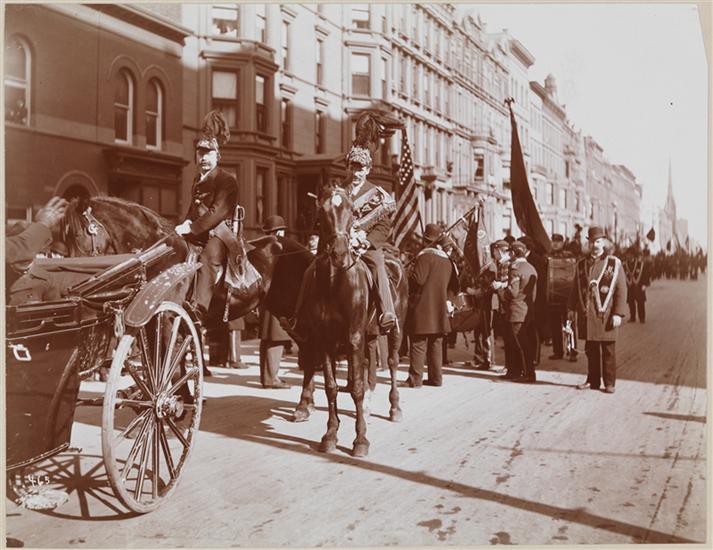 The parade in 1909, featuring a banner for the Kerrymen’s Patriotic and Benevolent Association. 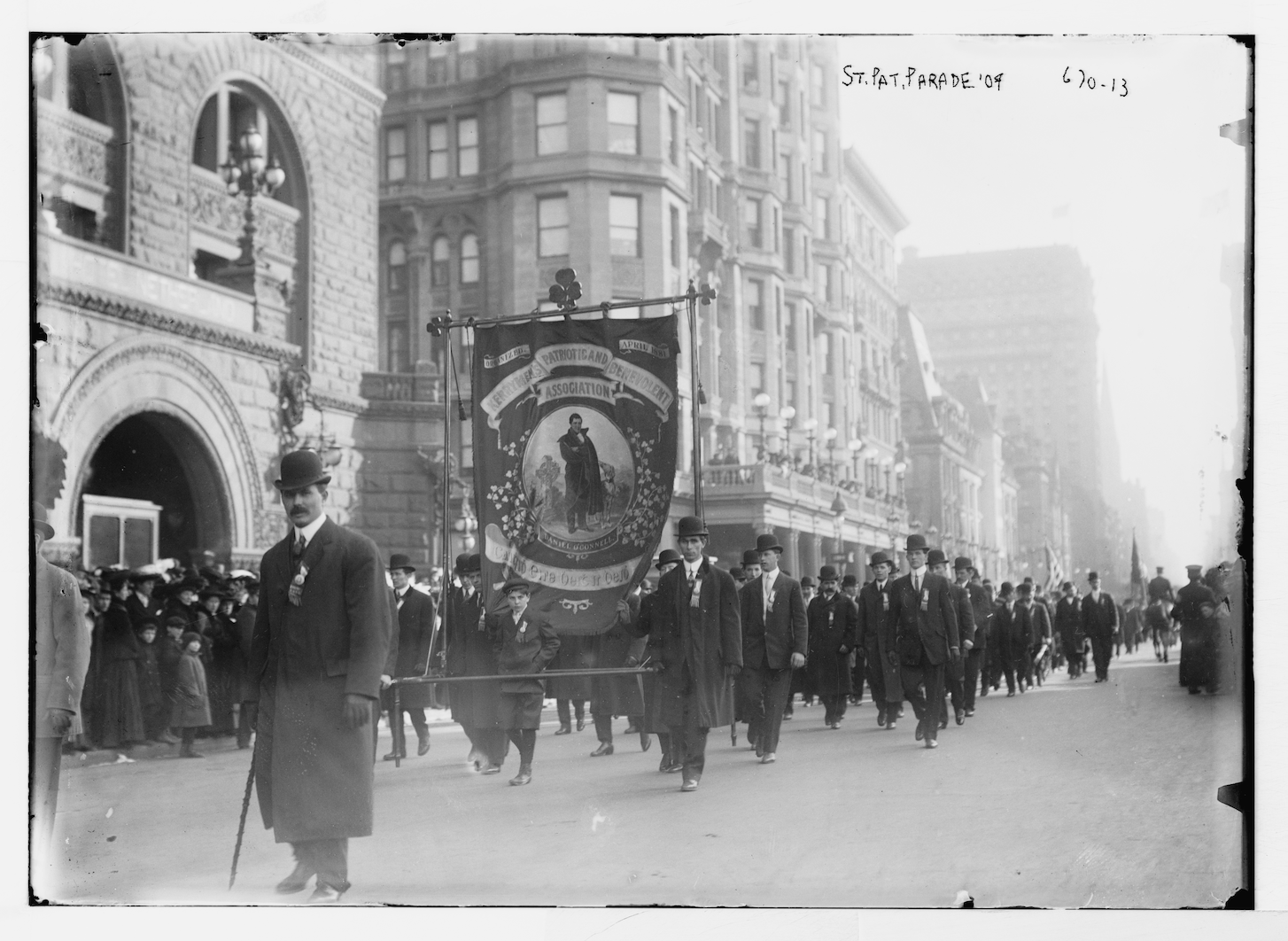 3 replies on “The Arrival of the Irish: An Immigrant Story”

Great podcast once again! I know enough about you two to suspect that your focus on immigrants is a quiet form of protest, but I’m curious about your choice not to mention the strength of the current crop of Know-Nothings across the USA. Is it too obvious a point to make? I’m writing from Canada, where we’re watching in abject horror as specific immigrant groups are demonized by your elected government.

By coincidence, after reading the NYC Times article “Two Irish Girls Who Made It to New York”, I previously had picked up the book “Paddy’s Lament” by Thomas Gallagher (Harcourt Brace Jovanovich, 1982, 295 pages) at our local library. Basically it’s about the Irish potato famine of 1846-1847, but the final 38 pages gives a glimpse of the NY of the time. And

“…no golden age existed on either side of the water…”

It reminded me of the NY Times article and Tyler Anbinder’s “Five Points”. Not all Irish eyes could be shining.

[…] Our friends, The Bowery Boys, have some resources that relate to Mary: North Brother Island, Castle Garden and Battery Park, and Irish Immigration. […]