PODCAST The era of the Zeppelin, how it shaped the New York skyline and the disastrous crash of the Hindenburg onÂ an airfield in New Jersey.

On the afternoon of May 6, 1937, New Yorkers looked overhead at an astonishing sight — the arrival of the Hindenburg, the largest airship in the world, drifting calmly across the sky.

In size and prominence, the Hindenburg would prove to beÂ the greatest airship of all. It was the Concorde of its day, providing luxurious transatlantic travel for the rich and famous. In Germany, the airship was used as a literal propaganda machine for the rising Nazi government of Adolf Hitler. New York City was already in the throes of ‘Zeppelin mania’ by then. These rigid gas-filled airships, largely manufactured by Germany, were experiencing a Jazz Age rediscovery thanks in part to the Graf Zeppelin, a glamorous commercial airship which first crossed the ocean in 1928. Its commander and crew even received two ticker-tape parades through lower Manhattan.

But dreams of Zeppelin-filled skies were quickly vanquished in the early evening hours of May 6, 1937, over a landing field in Lakehurst, New Jersey. Its destruction would be one of the most widely seen disasters in the world, marking an end to this particular vision of the future.

But a mark of the Zeppelin age still exists on the New York City skyline, atop the city’s most famous building!

An announcement in Scientific American of the first airship designed by Count von Zeppelin. 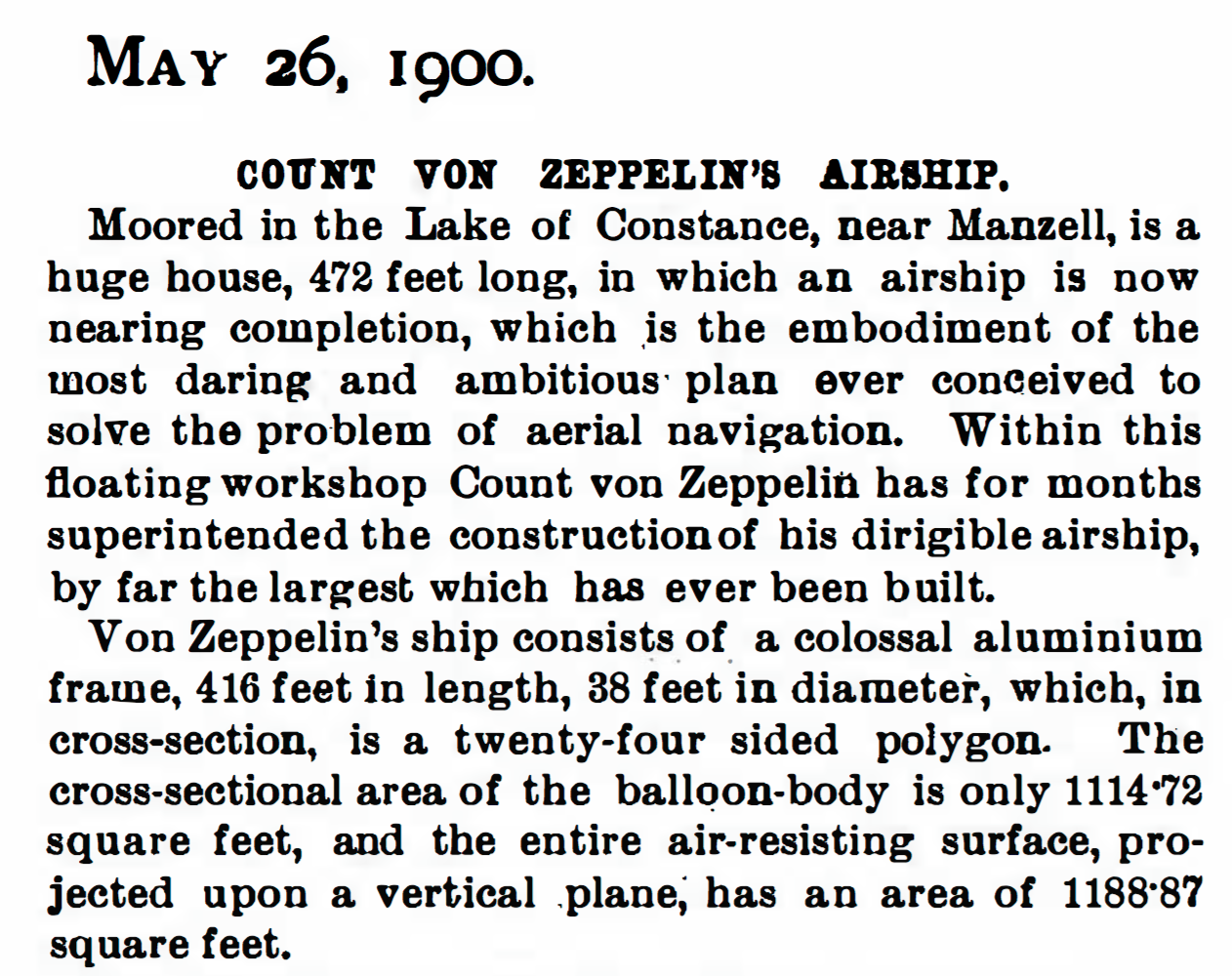 An early illustration from Scientific American (June 26, 1909) showing an early prototype of the Zeppelin airship.

In the 1920s people imagined putting mooring masts on everything!

The ZR3 Los Angeles, made for America by the Germans as part of post-war reparations, flies over New York, above the construction of the Empire State Building. 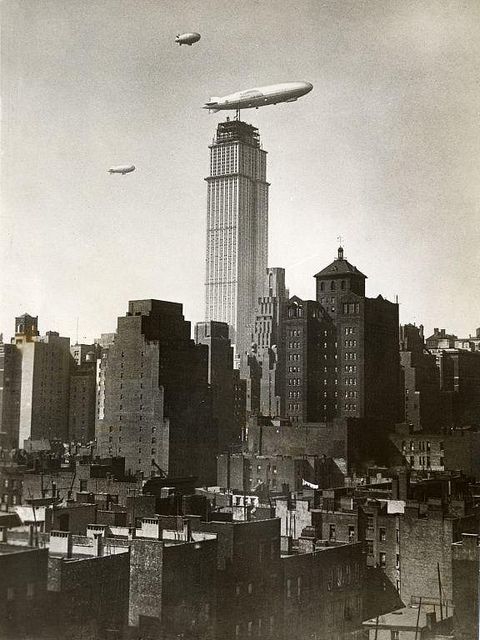 People gather around the Graf Zeppelin in an old file photo. Perhaps they’re boarding or are simply gathering in awe to view the marvelous airship.

Video of the Graf Zeppelin entering over the skies of New York, photographing the city.

A diagram of the mooring mast atop the Empire State Building — at least as it was supposed to have worked.

In Sky Captain and the World of Tomorrow, a retro-futuristic film, the mooring mast is effectively used to deposit Gwyneth Paltrow on top of the Empire State Building. 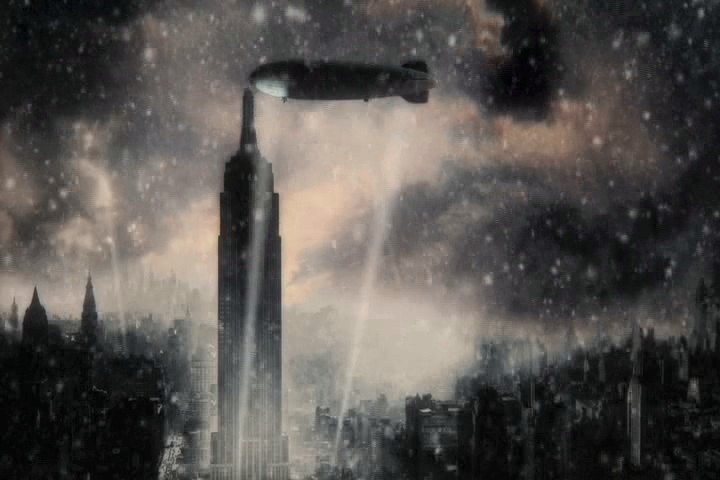 The Hindenburg flew over Manhattan on a few occasions. The photograph below is from August 8, 1936. 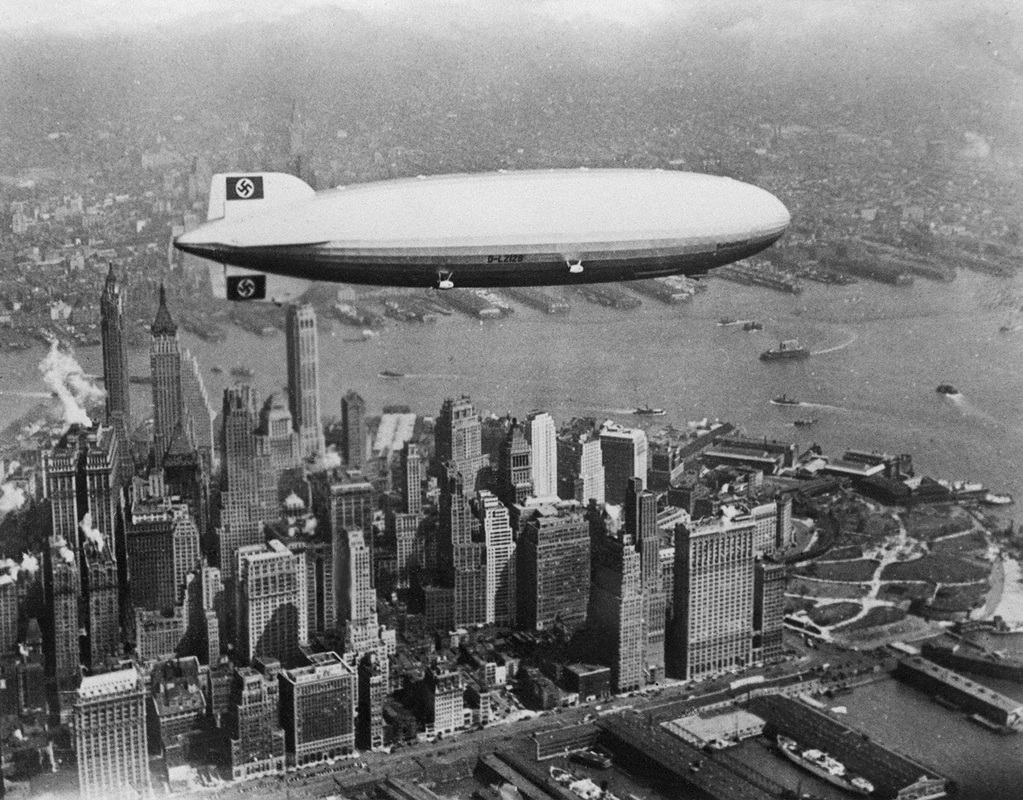 The Hindenburg had actually safely docked at the Lakehurst facility a few times in 1936. From the photo caption: “Various news crews covering the landing of the Hindenburg, in 1936, in Lakehurst, New Jersey. The man perched atop the vehicle on the left is Albert Emanuel ‘Al’ Gold, of Fox Movietone News, who would eventually capture footage of the famous Hindenburg disaster, in 1937.”

The Hindenburg ignites over Lakehurst and so hurtles to the ground in a horrifying burning mass. 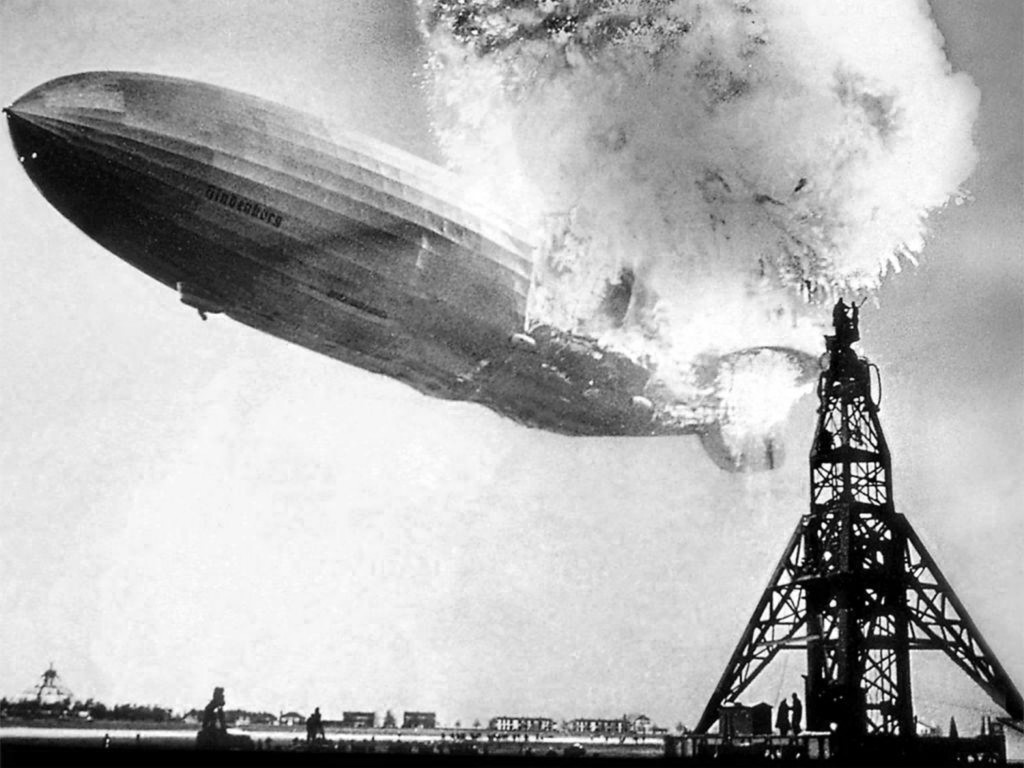 3 replies on “The Hindenburg Over New York: The Airship Age Comes To An Abrupt End”

My grandparents lived in Toms River, NJ, at the time of this event and my mother told me that my grandmother saw the Hindenburg in the air (before the crash, of course) and said “It should only crash!” (You have to imagine this with a Yiddish accent, and said in the form of a curse.)

Thank you for this. Very tragic tale. Part of me, though, wishes these colossal ships still existed and were a means of travel.