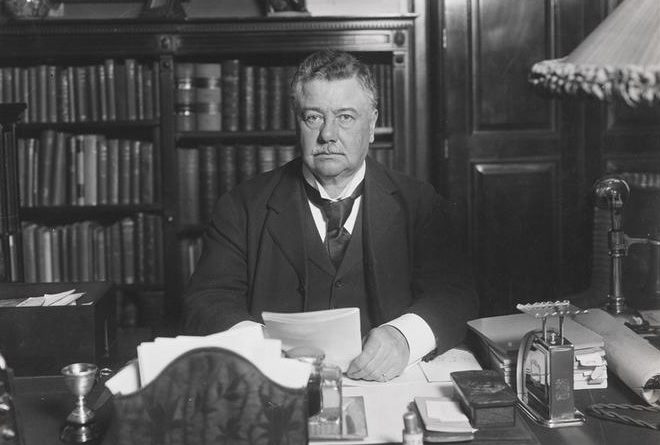 We speed ahead over a hundred years after our last Know Your Mayors entry to that jovial man with the funny name — Seth Low, born in Brooklyn 170 years ago, on January 18, 1850.

He holds a very unique place on the list of mayors, as he has been both the mayor of Brooklyn (from 1881 to 1885, back when it was a separate city) and mayor of the new five-borough New York City — in fact, the second mayor ever of the consolidated city, from 1902-1903.

A likable organizer and leader, ‘the people’s candidate’ as he was called, fast-tracking through city politics, Low was on-site for a number of significant changes to the city.

Elected Brooklyn mayor near the completion of the Brooklyn Bridge, Low was perturbed by seeming delays to its completion and, with the help of New York’s mayor William Grace, attempted to oust its Chief Engineer Washington Roebling.

Outvoted at the trustees meeting, Low then about-faced (like any good politician) and, on opening day, symbolically met Grace halfway of the new bridge.

Below: In his tenure as New York City’s mayor, he walked over the Williamsburg Bridge during its opening ceremony on December 19, 1903.

Low made his most influential mark as the president of Columbia College from 1890-1901, shuffling the school from midtown to its present location in Morningside Heights.

Below: the beautiful Low Memorial Library on the Columbia campus, photographed in 1898,

By 1898, thanks in part to the Bridge, Brooklyn and the other boroughs were combined with Manhattan to create Greater New York. Low was then elected mayor again — of the entire city — crushing the Tammany Hall candidate with the help of his friend Mark Twain, who stumped for him at political rallies.

Low was only mayor of New York City for only a couple years, but brought such reforms to the city as lower taxes and a purge of corruption within the police department.

Below: Seth Low in 1915, at the dedication of the Straus Memorial.

His short tenure is more importantly symbolically, as he won the job as a ‘fusion’ candidate of two different major parties — the Republicans and the Citizens Union, both seeking to squash the Tammany Democrats.

Perhaps by way of karma, he lost his re-election bid in 1903 to another name associated with the Brooklyn Bridge, George Brinton McClellan Jr, treasurer of the bridge. McClellan, by the way, would open his own bridge — the Manhattan Bridge — during his six-year term as mayor.

Low finished his professional career heading another prestigious school — the Tuskegee Institute in Tuskegee, Alabama — serving as chairman from 1907 until he died in 1916.