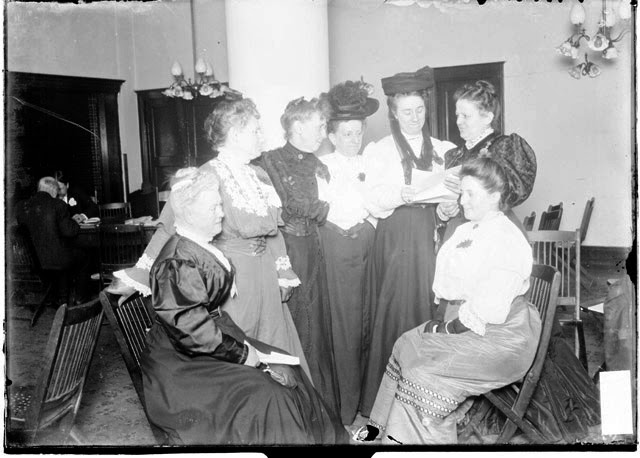 The Gilded Age brought us human beings of impossibly vast wealth.  It also brought us a mainstream appreciation of spiritualism, an exploration of  magic and the afterlife as a way of understanding a quickly changing world.

And sometimes it brought us both.   Frank W.Woolworth, builder of a retail empire and a legendary skyscraper, was a proponent of Egyptian occult practices, so much so that his mausoleum in Woodlawn Cemetery is an ode to the Egyptian theories of the afterlife.  The Chicago meat mogul Philip Armour was a rumored spiritualist.  The wives of robber barons frequently attended seances and psychic readings.  Few were immune to the lure of the spiritualism and the possibilities of otherworldly assistance in becoming rich.

Do you want to be rich like Woolworth?  In 1913, the same year as the completion of the Woolworth Building, a series of curious advertisements ran in newspapers across the country: 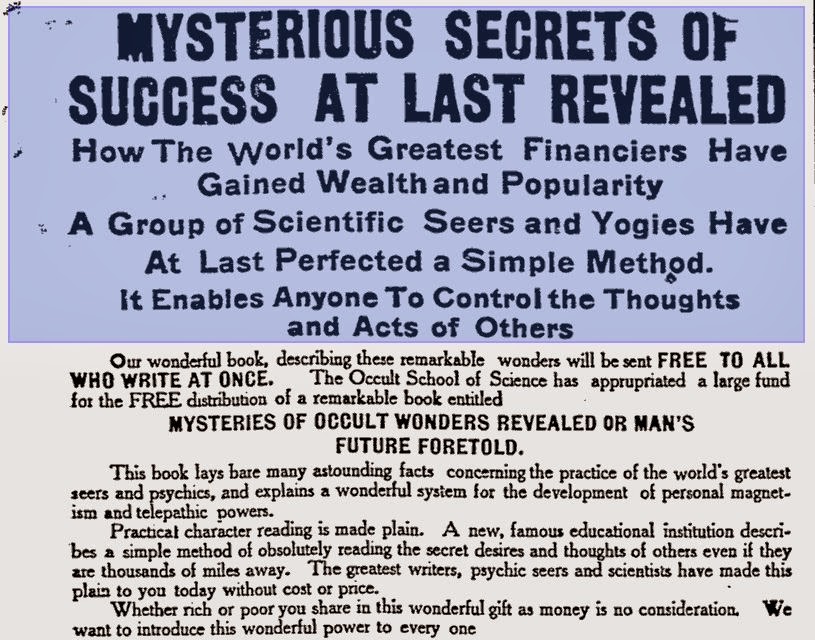 The ad promoted a free book that revealed the secrets of a “great psychic force which learned men claim rules the destinies of man,” produced by the Occult School of Science, located at 2075 (or 2083) Lexington Avenue at 125th Street.** 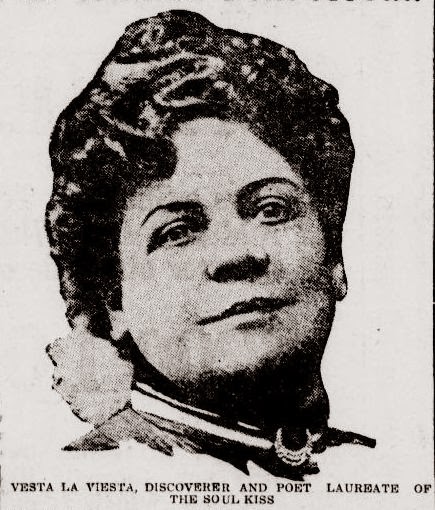 The writer of these curious lectures was none other than Madame Vesta La Viesta (at right), a well-known mystic and traveler of the galaxy.

La Viesta was well known to spiritualism enthusiasts, as well as to those who mocked them.  In 1904, at a place called the Cosmological Center, La Viesta described her recent visit to Mars and Venus via a projection of  her astral self.

Her descriptions predate John Gray’s famous book by decades.  Inhabitants of Venus “are associated most happily in soul mated couples, for they have a flexible astral or psychological tubing which invisibly connects their bodies.” [source]

In 1907, she revealed to the world the secret of the ‘soul kiss’, a rapturous and strangely indescribable form of love — taught to her on a recent astral voyage to Neptune — involving an aroused nervous system, cellular breathing and ‘wireless’ transmission of love from miles away.  She was so passionate about this shimmering new form of love that she wrote a song about it called “Description of a Soul Kiss.” 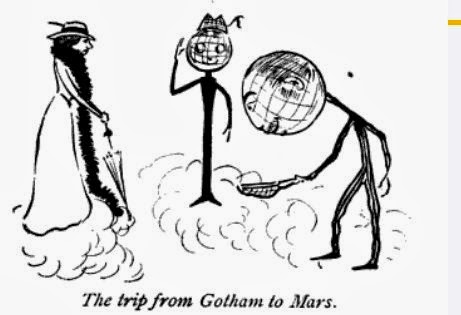 She was known for unusual lectures given from her Upper West Side apartment where she resided over a room of both corporeal and astral students. (Meaning that it looked like a fairly uncrowded room.)  She suggested that both disease and finance were mere “states of mind” that could be controlled using vibrational or astral techniques.  It was possible to let life’s many inconveniences “evaporate into the nowhere and melt into the astral ethers.” [source] 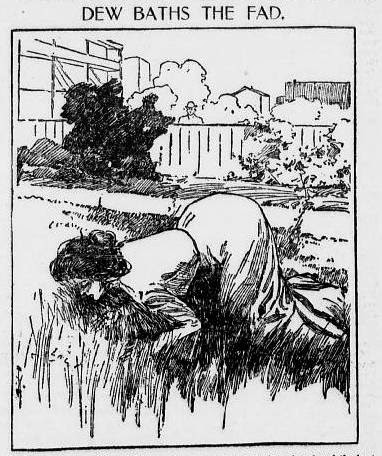 La Viesta was also a fan of the dew bath, involving women rubbing against morning grass which supposedly contained the secrets of age-defying beauty.

Said La Viesta:  “I have removed my clothing and have stood in the yard at the rear of my home in the darkness of the night and allowed the dew drops to collect over me until I was happy.” [You can read more on the curious dew-bath craze here.] At right: Illustration of a woman luxuriating in a dew bath, from 1902 NY Evening World

By 1912, at age 50, La Viesta became associated with the Occult School of Science, founded by Frederic Nugent.  Had she been clairvoyant, she might have known to stay away from Nugent, a notorious grifter.

Nugent, also known as Professor John D’Astro, seemed to approach spiritualism from a more cynical place; in short, he wanted to get rich himself.   Through his advertisements, he coerced people into ‘free’ spiritual guidance, then sent them catalogs full of useless and costly items.

The trickster specifically targeted poor people, placing hundreds of advertisements throughout the United States with trumped-up or falsified testimonials.  He also joined Madame La Viesta at the podium of the Occult School, offering courses of palmistry and phrenology that could cost up to $12.50 (or almost $300 today).

The Occult School wasn’t Nugent’s only scam.  He was apparently the mastermind behind at least six other mystical ruses, including the Iridescent Order of Iris, which purported to have over a thousand members, and a separate mail-order lodestone business, the Magnetic Mineral Company, which claimed to share the secrets of 18th century Haitian leader Toussaint Louverture.

Nugent’s lodestones granted good luck to their bearers, or so claimed his advertisements.  He bought the rocks from an unknown source at 12 cents a pound (today about $3), then re-sold the magic stones for up to $25 a pound (or about $570). 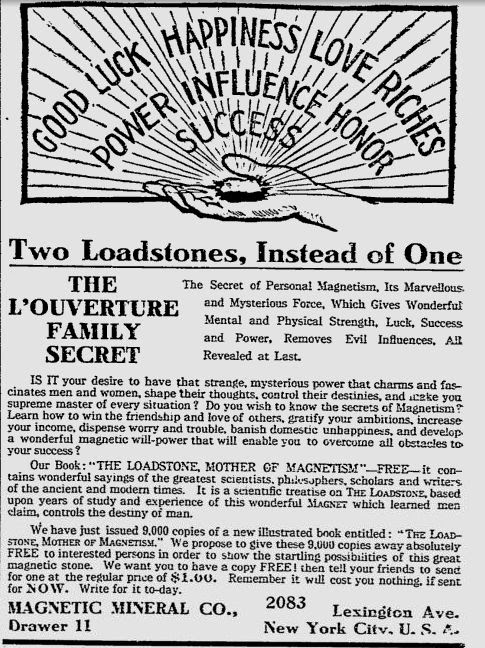 It was this scam that brought Nugent to the attention of U.S. Post Office inspectors who arrested him for using the mail system to defraud.  They seized “hundreds of pamphlets advertising Nugent’s schemes and thousands of testimonials.”  After spending a time in the Tombs, Nugent was indicted and sent to prison.

But whatever became of Vesta La Viesta, Nugent’s prized instructor?  Since that was not her real name (are you surprised?), it’s been difficult to track her later antics down.  It does appear she continued to share spiritual guidance, sometimes with people of some renown, such as the aviator Stanley Yale Beach.  In 1923, she wrote up her experiences in the book People Of Other Worlds.  Perhaps she finally left for the orbiting planets?

**They have several addresses listed, most of them on or around this intersection.  I also found 147 East 125th Street as a possible address.  Most likely, the mystics moved around!