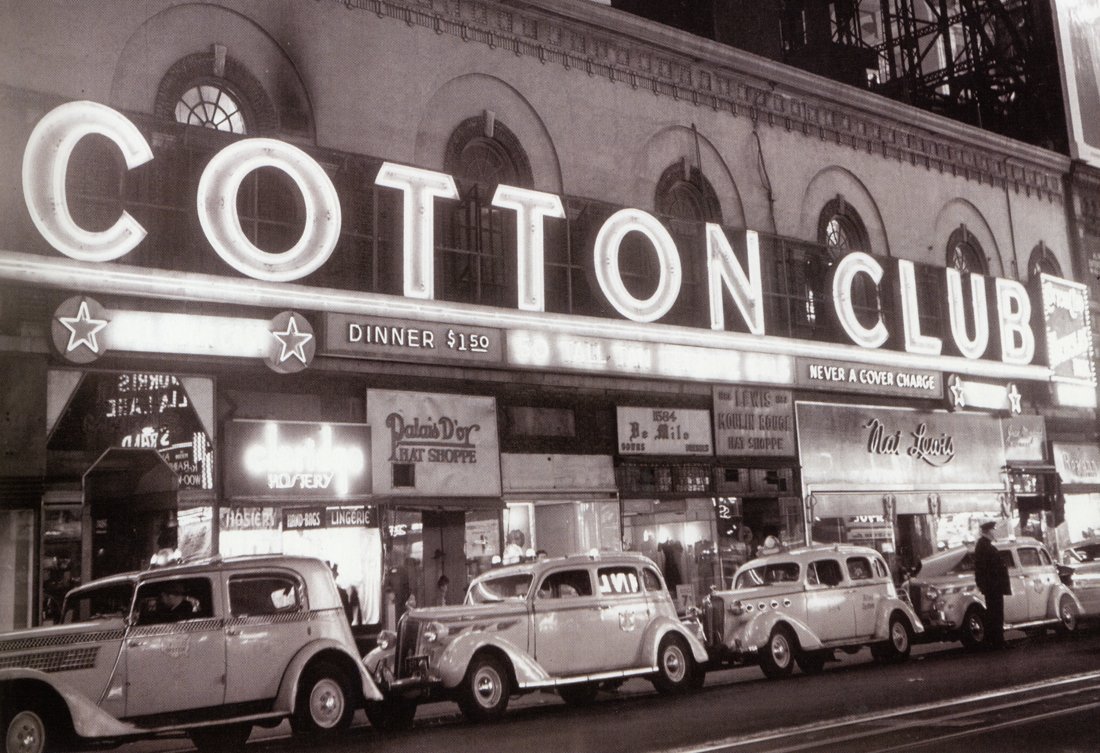 PODCAST The musical story of the Cotton Club, the most famous (and infamous) nightclub of the Jazz Age.

The Cotton Club, Harlem’s most prominent nightclub during the Prohibiton era, delivered some of the greatest music legends of the Jazz Age — Duke Ellington, Cab Calloway, Fletcher Henderson, Ethel Waters, the Nicolas Brothers.  Some of the most iconic songs in the American songbook made their debut at the Cotton Club or were popularized in performances here.

But the story of gangster Owney Madden‘s notorious supper club is hardly one to be celebrated.

The Cotton Club was owned by Prohibition’s most ruthless mob boss, and that’s just the beginning. The club enshrined the segregationist policies of the day, placing black talent on the stage for the pleasure of white patrons alone. Even the club’s flamboyant décor — by Ziegfeld’s scenic designer, no less — made sure to remind people of these ugly admission practices.

This is the tale of Harlem late night, of hot jazz and illegal booze, of great music and very bad mobsters, featuring some of the greatest tunes of the day by Ellington, Calloway, King Oliver and more.

The Cotton Club spawned from an earlier nightspot called Club Deluxe, owned by boxer Jack Johnson. (Below: Johnson in 1910)

Club Deluxe was renamed The Cotton Club in 1923 by Owney Madden, the mob boss and supplier of illegal booze.

The original Cotton Club at 142nd Street and Lenox Avenue. The Douglas Theater, on the ground floor, is doing much better here, photo taken sometime in 1927:

The entrance to the Harlem Cotton Club. Note the log decoration to make it appear like some old rugged shack.

A map from 1932 of the Harlem nightclub scene, featuring the Cotton Club, Small’s Paradise, Connie’s Inn, the Savoy Ballroom and more….

The Broadway Cotton Club as it looked one evening in 1938.

A look at the interior of the Broadway Cotton Club circa, during an New Year’s celebration, 1937, with Cab Calloway conducting.

An advertisement or program for The Cotton Club. The year 1925 is penciled in at the top, but it has to be from a later date. Calloway had just graduated from high school in 1925!

Maude Russel and her Ebony Steppers, performing in the 1929 Cotton Club show called ‘Just A Minute’.

A shot of Jimmy Lunceford and His Orchestra in 1934.

An advertisement for the Nicolas Brothers, for a performance in 1938 at the Broadway Cotton Club.

Lena Horne started out in the Cotton Club chorus line, but she eventually became a headlining star in her own right.

The Dandridge Sisters were notable performers in the final years of the Cotton Club.

The young and dashing Duke Ellington became a superstar in the years following his Cotton Club residency.

Duke Ellington and his Cotton Club Band in a 1930 film appearance:

In 1934, Cab Calloway made this short film featuring his music:

Cab Calloway’s here too, in this clip from the film Stormy Weather, but the real stars are the Nicholas Brothers in a breathtaking dance number:

THIS PODCAST FEATURED MUSICAL SNIPPETS FROM THE FOLLOWING SONGS:

Drop Me Off In Harlem – Duke Ellington

If You Were In My Place – Duke Ellington

I’ve Got The World On A String – Duke Ellington

On The Sunny Side of the Street – Duke Ellington

NOTES ON THIS SHOW:

— I made two amusing flubs in this show 1) Duke Ellington’s nickname is probably inspired by the Duke of Wellington, not (obviously) the Duke of Ellington, 2) the name of the movie with Lena Horne and the Nicholas Brothers is obviously named Stormy Weather, not  Stormy Weathers (which must be the name of a drag queen somewhere)

— Jack Johnson‘s story is so much more complex and I wish I had more time to talk about him.  For more information, check out the incredible documentary (and the book it’s based on by Geoffrey C Ward) called Unforgivable Blackness: The Rise and Fall of Jack Johnson.