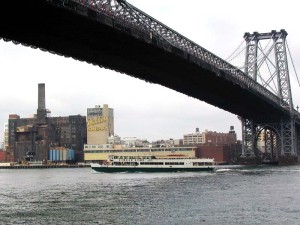 New Yorkâ€™s robust and often scary gentrification drive into Condo Land, already ripping through neighborhoods like the Lower East Side, threatens another unusual city landmark â€“ the Dominos Sugar factory, a cluster of important buildings just near the Williamsburg bridge on the Brooklyn side. While it might seem weird to get all angsty about a bunch of old factories, a view into its history reveals its prominence in the story of Brooklyn.

William Havemeyer, a German apprentice at a London refinery, and his brother Frederick moved to America in 1799 to take the reigns of a failing sugar factory at 29 Pine Street â€“ essentially on the back door of Federal Hall, once the center of Americaâ€™s fledgling government and just around the corner from the stock exchange. In 1805 the brothers moved their refinery to 14-16 Vandam Street in Soho. (Thereâ€™s a great old diner in the same spot that still smells like sugar!)

Business spread to its current location in Brooklyn after Williamâ€™s grandson C. Havemayer moved it there in 1859. At one point the sugar kings were so successful they ran a virtual monopoly of business along this area of the waterfront and kept most of North Brooklyn employed through the early part of the 20th Century. At one time, this site produced 60 percent of the entire nationâ€™s sugar. Domino, of course, still makes sugar but this particular site was shut down in 2004.

The current cosmopolitan ghost factory consists of several factories and warehouses at 5th and Kent Ave., the oldest one, the power house, from 1884. (The buildings range in age, because it seems the Havemeyers had a nasty problem of their buildings occasionally burning down.) But itâ€™s the flashy and dramatic Dominoâ€™s sign that had actually captured New Yorkâ€™s imagination and transformed the building into an indelible mark on the skyline. It was hoisted up in 1967 with the time and temperature added underneath it the following year.

The current plans, still being debated, has the site almost entirely razed to construct residential buildings. The only building really safe from harm is the main processing house, the most likely candidate for landmark status. But thatâ€™s NOT the building with the rustic and much beloved sign. Its fate may not be as sweet.

For a far more indepth history, you should check out Waterfront Alliance website directly.

However some breathtaking photos at its ruined insides can be found here , which also links to several other photo caches throughout the internet of this decrepit and apparently photogenic location.

And we do have to admit the â€˜virtual museumâ€™ at the Dominos Food corporate site is pretty amusing too.