While winding through the financial district in lower Manhattan on Sunday (Sept 2), I made my way down Stone Street (one of the city’s oldest paths) and found this scene outside of Ulysses bar: 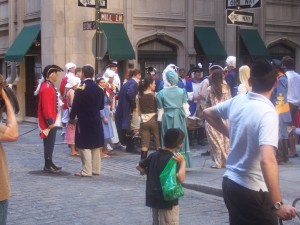 About 40 people, in various Colonial and period garments, were carousing in character and loudly carrying on like Revolutionary War heroes. Some of the other buildings on that street have been around since the 18th Century, so at least the location seemed suitable. And the owner of Ulysses also owns the Irish bars Puck Fair (near the Puck Building) and Swifts Hibernian (as in Jonathan Swift), so they’re clearly comfortable with some historical theater. 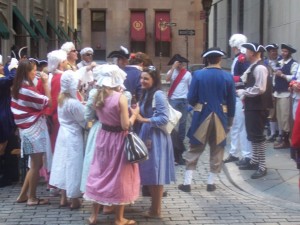 I apparently couldn’t get away from these folks, as shortly afterwards I ran into them at Federal Hall. 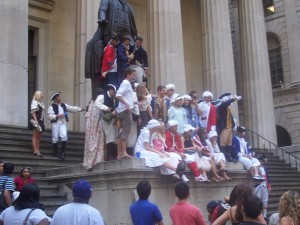 By this point, it was clear that our friends had liberally sampled from Ulysses’ many fine Irish ales and stouts. People were shouting ‘Huzzah!’ and starting up ‘USA!’ chants.

The reason for that soon became evident. A man strode out with a copy of the Declaration of Independence and read it to the crowd as if it were a new document. Which, on these steps, on July 9, 1776, it in fact was, by George Washington, reading from a copy from John Hancock. 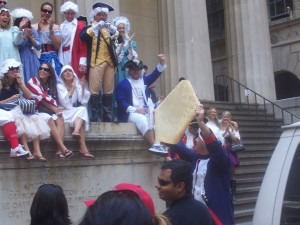 It was because of this reading that the empassioned troops stormed down to Bowling Green and tore down the statue of King George and his horse, the pieces of which were scattered to the consternation of future treasure hunters. Our little group of re-enactors, however, stopped quite short of doing anything like that.

Im not exactly sure yet what the significance of the whole affair was (still calling around to ask). However I do know that it was at this building, during the summer of the first government of the United States, on September 2, 218 years previous, that the Department of the Treasury was formed.