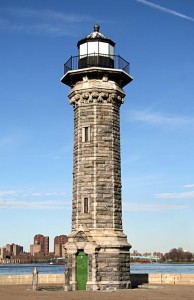 After the Renwick Ruins (which on most days aren’t open to the public) and the tramway (which takes all of five minutes to enjoy), the landmark which people associate with Roosevelt Island the most is the lighthouse on its northernmost point, built back when the isle was called Blackwell Island.

There are certainly more famous lighthouses in New York City. The ‘Little Red Lighthouse‘ underneath the George Washington Bridge was made famous by a classic children’s story. The stumpy lighthouse at the South Street Seaport serves as a memorial to the Titanic. And technically, the Statue of Liberty was lighthouse-ish, serving as a beacon for ships into the harbor.

But none had as ominous a purpose — or as peculiar an origin — as the Blackwell Island lighthouse, Roosevelt’s homage to the determination of the clinically mad.

As we mentioned last week, a sanitarium was built on Blackwell Island on 1839 to house mental patients previously stranded in various wards unsuited to their particular needs.

Many years after its notorious fire in 1858 and subsequent rebuilding, the relatively petite 50 foot tall lighthouse was planned to illuminate the waters filled with ships exiting from the perilous Hell’s Gate, the waterway between the Bronx and Queens. Presumably there had been a problem with vessels running aground on the relatively dark island, illuminated only by the lights of the asylum.

James Renwick, he of the smallpox hospital, was tasked in 1872 to design the lighthouse, a Gothic octagon cut from dark gray gneiss originating from the island’s own quarries, stone that would adorn many of the island’s most prominent structures.

The only thing holding back the construction was one particularly conscientious inmate of the asylum named John McCarthy. (Or, at least, this is how the legend goes.)

Whatever his maladies, McCarthy was deathly afraid of an attack by the British. Although New York was indeed under fear of such an attack in 1812, it never happened. By 1872, it was very unlikely to ever happen. This did not deter McCarthy, who, in his delusions, just wanted to protect the island from eventual attack. So, as the story goes, he built a fortress-like wall from river clay on the north end.

According to an asylum warden, the “industrious but eccentric” man “is very assiduous, and seems proud of his work, and he has reason to be, for it is a fine structure, strong and well built.” Apparently it was ‘fine’ enough to fortify some of the marshy land that would be used later for the lighthouse and adjoining platform. 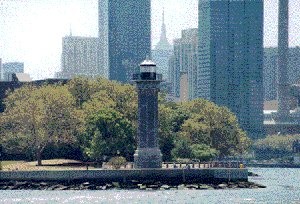 He seems like a good but very misdirected citizen, in my opinion. However, such a fort would be no match for a warship and besides, there were no warships. The city, possibly through bribery, convinced McCarthy to demolish the fort.

Not surprisingly, labor from the asylum was used to build the lighthouse, and design shifted slightly from Renwick’s intentions. It is unclear who among the asylum laborers was involved in actually constructing the lighthouse. Another inmate Thomas Maxey is also attributed to the construction.

Whoever it was, McCarthy was the one attributed on a plaque that stood in front of the lighthouse until the 60s:

Serving the harbor admirably for almost 70 years, the lighthouse was decommissioned in the early 40s, then restored to its quaint, haunted lustre in 197s. It’s joined on the north side by a 147-acre park highlighted by the lovely white ‘meditation steps’, where you can bask in views of Gracie Mansion and the skyline of Manhattan, as well as ponder the invisible border of McCarthy’s former noble fort. I can personally attest to this being a perfect place for a picnic.

1 reply on “Mysteries of Roosevelt Island: The Madman’s Lighthouse”

Your site has won a Blog of the Day Award (BOTDA)