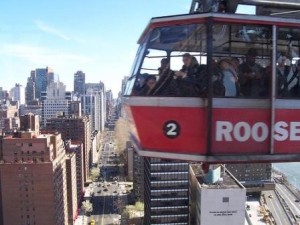 We’ve got some more on that wacky, wonderful place called Roosevelt Island! We highlighted some of the spookier stuff last week. Read it all here.

One of the more intriguing aspects to Roosevelt Island is the notion of even getting there at all.

For most of its existence, people used ferries to get to and from Manhattan and Queens. Boatloads of prisoners, smallpox patients, the mentally insane, and, yes, residents of the island crossed the East River daily.

Later, when the Queensboro Bridge sprung up on its north side, a trolley would stop in the middle of the bridge, allowing people to then enter a small elevator which would take them down to the island. According to NY Roads, this was the only way for the public to get to Roosevelt (then Welfare Island) in the 50s. I can’t imagine this inconvenient form of commute brightened the island’s reputation any.

A lift bridge spanning 2,877 feet to Queens was opened in 1955, finally allowing automobiles on the island. Its also the only way you can walk there. Those odd Queensboro elevators were dismantled in 1970.

However Roosevelt Island is often defined by its most popular method of conveyance, the Roosevelt Island Tramway. This unique way of getting to and from home, taking less than five minutes one way, is a picturesque and perfectly European way of experiencing the city. The aerial tram, made by the Swiss company Vonroll, is the only one of its kind on North America to be used as actual mass transit. (Many vacation destinations obviously use trams, including mountains in Oregon and New Mexico.)

The Tram was built in 1976 as a temporary relief for residents impatient with the slow development of the subway out to the island. By the time the subway (now the F line) reached Roosevelt in 1989, the Tram had become such a signature of the midtown skyline that it was retained.

Some passengers in 2006 might have wished they had hopped on the subway. On April 18, 2006, the two operating cars abruptly stopped moving, leaving almost 70 people stranded above the East River. It took almost six hours, well into the early morning, for rescue workers to extract the passengers ten at a time using an industrial crane and rescue gondolas. According to a 12 year old passenger, who had to leap from the tram doorway to the gondola: “I was just a little scared because, one, what if I miss it; two, what if I slip, I might fall into the river.”

(Go to WNBC to see some of the vivid coverage.) 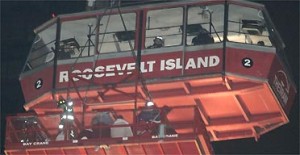 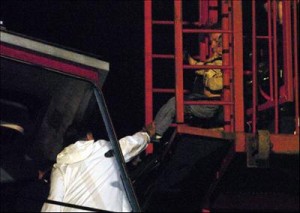 Of course the Tram isn’t foreign to use by malevolent types and rescues by bonafide heroes, at least in the fictional realm. Spider-man seems to be the tramway’s personal security guard, in comic books and in film. 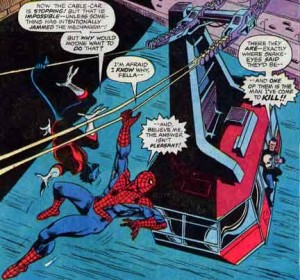 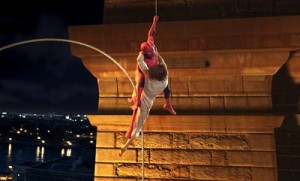 You can take a far safer virtual tram ride with the Roosevelt Islander.

The subway seem to be the easiest way to travel, but even that has an odd distinction — at a little over 100 feet deep, its the second deepest subway stop in the entire city. (That’s still 80 feet shorter than the 191 Street station in Manhattan.) After a series of steps and escalators, it can seem like you’re emerging from a subterranean city.