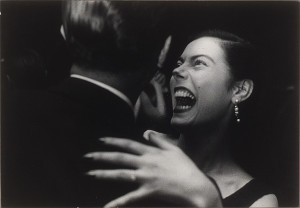 Has there ever been a place in Manhattan more glamorous than El Morocco? Probably not.

John Perona opened El Morocco as a speakeasy at 154 East 54th Street, moving down the street to 307 East 54th Street in its later days. (Both locations have been destroyed; the Citicorp building stands where the original once stood.) “Elmo”, as the socialites would utter it, transitioned into post-prohibition losing none of its glamour or appeal.

Along the way, it set the standard by which all other nightclubs of the 30s through the 50s were to be judged. (Only the Stork Club and possibly the 21 Club would rival it.) It was the first to use a velvet rope. The ruler of the rope, Angelo Zuccotti, was so revered that the New York Times ran his obit when he died in 1998, a doorman
“who wielded the velvet rope at El Morocco with such authority and finesse that he helped define the very line between cafe society and social Siberia.” 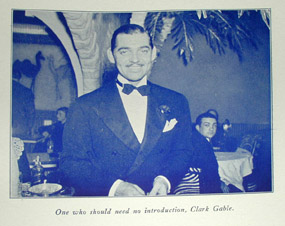 And via Perona’s official photographer Jerome Zerbe (who also worked the Rainbow Room), this midtown speakeasy turned celebrity hotspot was one of the first to employ photographers to snap candids of its famous clientele. Yes folks, you can actually trace the scandalous club photos of Lindsey Lohan and Britney Spears back to their less shameless beginnings at El Morocco.

According to an account by Zerbe, “From 1935 until 1939, I was at the El Morocco and I invented a thing which has become a pain in the neck for most people. I took photographs of the fashionable people and sent them to the papers.”

One key element was Elmo’s signature blue and white zebra-striped banquettes, which popped from the corners of every snapshot. Photos running the next day would easily be recognized. 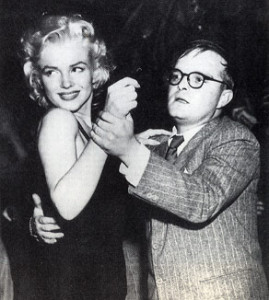 The other, of course, was the who’s-who list of stars that would traipse through. And who exactly showed up at El Morocco’s doorstep? I can throw some names at you — Clark Gable, Cole Porter, Ingred Bergman, Truman Capote, Audrey Hepburn, Marilyn Monroe. Humphrey Bogart, God bless him, was banned from the club for life. (The story is so incredible, I’m saving it for the end.)

Scour any recollections of Elmo, and you’re bound to spend half the night picking up all the dropped names. “Errol Flynn would either sit at Perona’s table or cruise the room,” says Taki Theodoracopulos. “On a normal night Aristotle Socrates Onassis would be there, more often than not without his wife, Tina, who would come in later with the then young Reinaldo Herrera.” 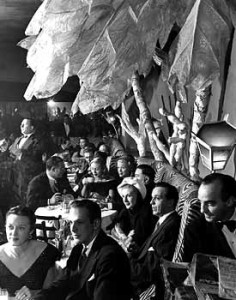 And from Nannette Fabray: “One entered, and there was a hierarchy of where one sat. The first table on the right was the best; the second was reserved for the owner, John Perona. You didn’t dare go unless you were perfectly turned out.”

Sadly, like an aging film actress long past her prime, El Morocco lasted well into the 90s, dissolving into less alluring variants until it took the final step of becoming a topless bar in the mid 90s, under the name Night Owls.

Celebrity hotspots these days rarely have the elegance or the prestige. I can only imagine if Britney Spears turned up at Angelo’s velvet rope, that he would turn her away. 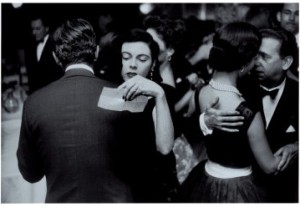 Oh, and why was Humphrey banned from El Morocco? Well, one night in 1950, Bogart dropped off his wife Lauren Bacall at home, and he and a friend went out for the evening. Heavily inebriated, Bogart thought it would be funny to bring two 22 lbs. stuffed panda bears into Elmo as their ‘dates’ and proceeded to prop them up on a chair. 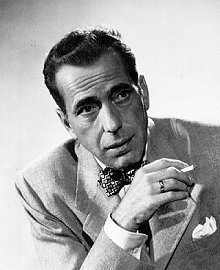 Two drunk young women attempted to pick up the pandas, but, depending on who you believe, were either pushed by Bogart or tumbled to the floor by the shear weight of the heavy toys. Later, in a flurry of half-truths, it was believed Humphrey and his friend violently assaulted the young women for attempting to steal the panda bears. Not helping matters — the boyfriend of one of the women then began throwing plates at Bogart.

The next day Bogart received a summons to appear in court. The man who would become the greatest movie star of all time, on that day, had to convince a judge that it was his excessively large stuffed pandas, and not his fists, that had felled the young women. The judge eventually threw it out of court.

When asked by reporters if he was drunk that night, Humphrey replied, Who isn’t at 3 o’clock in the morning? So we get stiff once in a while. This is a free country isn’t it? I can take my panda any place I want to. And if I want to buy it a drink, that’s my business.

My nonna (grandmother) says when she moved to New York from Italy in the 1950’s the owner of El Morocco was the only person she knew since he was from Italy. She met Marilyn Monroe, Jackie O & Lucile Ball. She has the most amazing stories to tell!

Could your Nonna tell us more on camera about those amazing stories ? Thanks

It is such an Honor! The New El Morocco on Broadway has brought to us all those beautiful Memories from the 1930s-40’s etc..
http://www.elmorocconyc.com

I loved across the street from the El Morocco in the 1950s growing up.
My story “A Line Between Rich and Poor” was published in the Christian Science Monitor, July 21, 2009.
The line I refer to was the clothes line from the tenement building I grew up in on 53 Street. I listened all night to the orchestra playing great music all night and loved growing up underneath the Third Avenue el train and El Morocco around the corner. Good memories of an era no more. Diane Leon

Is there anybody could tell us why or how this famous cabaret was called El Morocco?

Any relationship with Morocco as country ?

Thanks for your answer.

Cannot wait for you to get up to Flamingo.