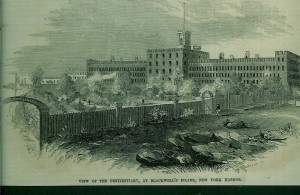 I mentioned earlier that Roosevelt Island was named for a Franklin Delano Roosevelt memorial that was never built there. Perhaps the reason that doesn’t bother anybody is that’s a far more attractive name than its last one, Welfare Island. In the continuum of names in the island’s history, Welfare is worse than all of them, although slightly better than Hog Island.

(The best name it’s ever had? The original Canarsie tribe name Minnahannock, meaning ‘it’s nice to be on this island’.)

Welfare Island might seem a rather unappealing name these days, but at the time it was changed from Blackwellâ€™s to Welfare in 1921, the connotation was less onerous. By that time, the island was crammed with institutions that benefited “the welfare” of the public, while at the same time sequestering society’s most undesirable. It’s held an almshouse, various hospitals, a workhouse, an asylum. Yet none of these public projects grabbed as many headlines as the island penitentiary, which stood there for over a hundred years.

A prison was one of the first things built on then-Blackwell’s Island in 1832. A north wing was added to the prison to accommodate inmates transported from a facility next door to Bellevue Hospital. (The mental patients of Bellevue would make a similar journey to Blackwell’s asylum at around the same time.) The five-story L-shaped building had a granite, medieval-looking facade and 800 cells, much of it filled to capacity through most of its existence.

The prison fomented little idleness. Male inmates from there and the adjoining 220-cell workhouse (essentially a correctional facility for “drunks and disorderlies”) were used either in the quarry or to build many of the island’s structures, including a seawall around the perimeter. (Below: a picture from the book Images From America: Roosevelt Island of some of Blackwell Island’s prison laborers.)

This takes the notion of a chain-gang to a whole other level. But then, where would they escape to? Even if they could find a boat, the closest dock was heavily guarded. And although swimming was a possibility, the waters of the East River were far more crowded than they are today. Although some criminals — like ‘Oily’ Rockford — managed escape quite easily.

While the men were outside, women prisoners would do more ‘womanly’ chores, like sewing and laundry. I can’t help but think many of these women could have been better served in the quarries than in the sewing circles.

The prison and workhouse has seen its share of celebrity lawbreakers; one could imagine Paris Hilton feeling at home here. (I’m kidding; she wouldn’t last a day.) Many of the purported crimes wouldn’t even get you a slap on the wrist today.

Margaret Sanger’s sister Ethel Byrne was locked up for providing birth control advice to women in Brooklyn. Anarchist Emma Goldman was a frequent ‘guest’ for incendiary remarks and inciting riots, joining other frequenter Madame Restell, an early 20th century abortionist. Well before her singing career took off Billie Holiday spent four months here for a “vagrant and dissipated adult” (code for prostitution), although she was still a minor. 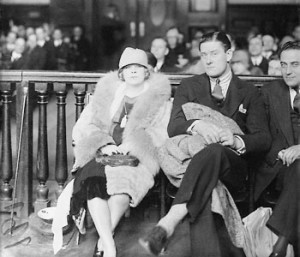 However its two most recognizable residents to the public at the time stand at either end of the justice scale; Boss Tweed served there for a year as the instigator of New York’s corruption woes, while comedian Mae West was locked up for eight days in 1927 on public obscenity charges, due to the ‘salacious’ nature of her Broadway show ‘Sex’. She received so much media attention that she was allowed to wear silk underpants at night and was eventually let off for good behavior. (The picture above is Mae in court, possibly on the day receiving her sentence.)

The celebrity element also helped shine spotlights on the prison’s squalid conditions — a sorry hall of overcrowding, drug addiction and corruption. By the 20th century, gangs of prisoners virtually ran the place. It would become the inspiration for dozens of pulp novels and films, including one actually called Blackwell’s Island.

After a few sorry reforms — including the name change to Welfare Island — produced few results, it was up to can-do mayor Fiorello Laguardia and his hire for corrections commissioner Austin H. MacCormick to raid the prison and transport its remaining inmates to the newly built Rikers Island. The Welfare Island prison was quickly torn down and replaced by Goldwater Hospital, today the Coler-Goldwater Memorial, which still serves the city in an environment far more inviting that anything that ever stood there before. has some of the best medical facilities in the city. 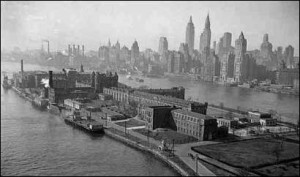 That’s it for Roosevelt Island this week! If you want to know more, the best online resources I could find include those at the Roosevelt Island Historical Society and a spectacular in-depth timeline at NY10044. (I know, I know, I didnt even get to the Blackwell house, fifth oldest building in all of New York City, or the ruins of old Strecker Laboratory.)

By the way, if you want to see what Blackwell Island might have been like, Roosevelt Island 360 has a video stream of the 1903 panoramic film reel that surveys the island in all its gloom and gray.