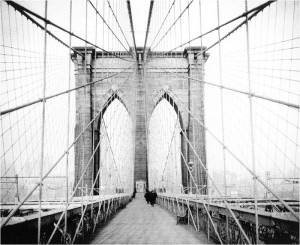 Before I forgot, I just wanted to throw on a few more Brooklyn Bridge resources, some of which we used for our podcast this week.

Foremost, we started with probably one of the top ten greatest books about New York City — namely David McCullough’s indispensable The Great Bridge. The author of 1776, Truman, and John Adams wrote this in 1972, and I can’t imagine a better tale being written about the history of the Brooklyn Bridge. In fact, Ric Burns’ documentary on the Bridge borrows heavily from it and even features prominent interviews with McCullough. I’m a huge fan of McCullough’s work anyway; so reading this was akin to my favorite movie star handing me a big bag of candy.

The lovable, gullible phrase ‘selling the Brooklyn Bridge’ actually has its origins in a machinations of a few turn of the century con artists. Says Luc Sante in yet another seminal book on New York culture ‘Low Life’ “The oddity of the thing today is not that there might have been con artists ready to sell the bridge, but that there would have been suckers both gullible enough and sufficiently well-heeled to fall for it. The Times has a nice survey of the suckers here and the phenomenon’s connection to ‘i’ve got swampland in Florida to sell you.’ 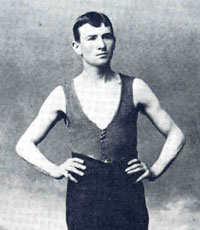 When people weren’t trying to sell the bridge, they were attempting to jump off of it. Several years after the bridge was opened, bridge jumping became something of a suicidal past time in New York. Robert Odlum was the first person to try it, dramatically and unsuccessfully. Read our coverage of the most famous bridge jumper, Steve Brodie (at left), who may not have actually jumped off it at all. Sadly, they’re still doing it.

And who’s the latest moron who wants to try it. David Blaine! 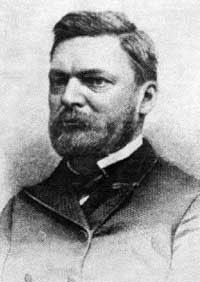 And finally we forgot to mention one of the most surprising facts about the Bridge’s Chief Engineer Washington Roebling (at right). Despite being horribly crippled and weakened by ‘caisson disease’, Roebling went on to actually outlive almost all the original participants of the bridge including his wife Emily. In fact, late in life, Washington married again. He died July 21, 1926, almost 44 years after the bridge was opened! (I need to resist the temptation to add “…Believe It, Or Not!” to the end of that.)

And what does Washington Roebling have to do with the Astors? Both had namesakes go down on the Titanic in 1912. In Washington’s case, it was his namesake nephew, son of Washington’s brother Charles.

What’s in the future for the Brooklyn Bridge? How about a big waterfall?