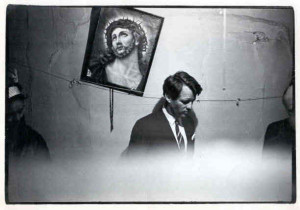 Fred W. McDarrah’s photograph of Robert F Kennedy touring a Lower East Side tenement on May 8, 1967, a year before his assassination. He was there visiting the apartment once inhabited by a young Jacob Javits, the New York Senator born to Russian Jewish parents who spent his childhood in the Lower East Side.

What color is the Empire State Building tonight? [Find out here]

A New York senator debates an Illinois politician (but one is named Seward, the other Lincoln) [City Room]