Above: Essex Market then….

The Lower East Side this weekend was filled with young fashionable people in their 20s flitting about from restaurant to bar from dusk till the early morning. Of course the neighborhood still has a strong presence from the Puerto Rican and Chinese communities, but they close up well before the nightowls start prowling.

But a hundred years before the streets were quite different, as we mentioned in our podcast this week. Young Jewish entrepreneurs, most off the boat from Europe, made a fine living operating pushcarts through the busy streets, selling cheap eats to bustling community.

Eventually, the Gusses and Schimmels and Russes of the world greated a great amount of traffic in the streets of the Lower East Side. By the 30s it had become a rather cluttered mess, at least to mayor Fiorello Laguardia, who was determined to clear the streets of pushcarts and corner stands while offering a venue for these businessmen to continue selling their products.

The result, built in 1940, was the Essex Street Market at Delancey Street, four large enclosed market areas with room for dozens of vendors to sell every conceivable sort of merchandise.

Many Jewish business, including Schapiroâ€™s Kosher Wines (in operation since 1899), thrived at the Market. (Sadly, Schapiro’s closed at the Market last year with the death of propriator Norman Schapiro.)

However, almost as soon as building came up, the neighborhood itself swiftly changed, with Jewish families moving out to communities in Brooklyn and Puerto Rican moving in. Essex Street Market reflected the change, creating the appealing juxtoposition of Jewish and Puerto Rican food stands that still remain today.

The arrival of the supermarket in the 1950s reversed Essex Street Market’s fortunes, and two of the four buildings were closed, including the meat market Building D in 1955. Still basically abandoned, Building D was recently home to an installation art project by Mike Nelson.

The market deteriorated during the 80s and 90s until a $1.5 million renovation in 1995 collected all the remaining vendors into one building. The latest incarnation offers an array of shops, from distinctly old school to boutique-y, old inhabitants like Aminova’s Barber Shop — with its curious collection of clocks — sharing space with vendors of gourmet chocolates and French cheeses.

And in a healthy sign that Essex Market will never completely lose its charm, last year West Village institution Shopsin’s moved in, bringing its eccentric owner Kenny Shopsin and that seemingly-infinite menu. 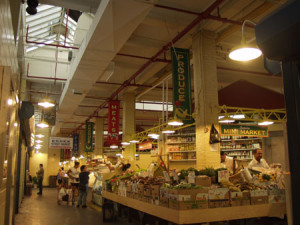