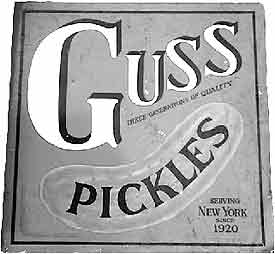 It’s odd to hear people speak passionately about pickles, as if they’re a lifestyle. But that’s how people talk about Guss Pickles, the self-proclaimed ‘largest pickle emporium in the world’ and an institution of the Lower East Side since 1910.

But as you shall see, those calling themselves the ‘largest’ and that store currently sitting in the Lower East Side are actually warring factions, wielding their pickles like scabbards engaged in a years-long battle for pickle dominance.

Pickles were a popular snack in New York as far back as Dutch New Amsterdam. They’re New York’s first portable food — long before the knish and the hot dog — and fairly easy to produce.

With the huge immigrant boom in lower Manhattan, young men in hopes of making a few bucks would operate a pushcart through the streets selling their wares. In the crowded blocks of Jewish Lower East Side, dozens of pushcarts occupied the streets, competing for customers with sidewalk stands and, for those lucky enough to have the money, actual stores!

(Check out this short silent film demonstrating the daily grind of a pushcart operator.)

Dozens of vendors at the turn of the 20th century sold pickles in the Lower East Side. Izzy Guss, an immigrant from Russia who arrived here in 1910, had a pushcart and sold produce. But he specialized in pickles. Although the competition was fierce — the area around Essex and Ludlow even called the Pickle District — Guss eventually bought his own store on crowded Hester Street in 1920, and there, in wooden barrels lining his store front, mastered his recipe for what has become the New York City pickle.

Guss’ Pickles are a New York legacy, but a war has brewed for over a decade about who currently holds the mantel of that legacy. Guss eventually bought some pickles from the Lebowitz family-owned United Pickles company. When Guss died in 1975, the business was sold to the Baker family who, in 2004, then sold it to new owner Patricia Fairhurst, who currently runs the the current Lower East Side location on Orchard Street. 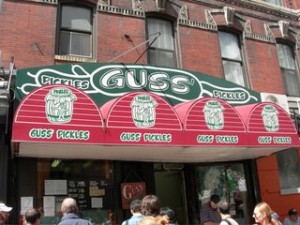 However, Andrew Leibowitz of United Pickles lays claim to purchasing the actual Guss trademark from the Bakers when he sold the shop to Fairhurst. According to the Villager, the Bakers claim that Fairhurst ‘bought a lease, not a trademark’ and that they are the rightful owners of the Guss branding.

Confused? There are apparently two strains of Guss pickles in the universe. Leibowitz alledgedly has hold of the name, but Fairhurst lays claim to the original recipe.

In 2007, the controversy spread to Whole Foods, which began selling Leibowitz’ Guss pickles, which Fairhurst claims are not true Guss pickles.

Just to add to the pickle madness, a third claim to the Lower East Side pickle throne has emerged on Essex Street. The Pickle Guys, with their gallons of freshly made pickles, is operated by former employees of Guss pickles. They too may have a legitimate claim in Manhattan’s pickle heirarchy. Chowhound provides a taste test between Guss’ and Pickle Guys’ creations.)

I have a feeling that like the American Revolution, this will not be resolved until blood — or spilted pickle juice — is flowing through the street.

2 replies on “The Pickle Civil War!”

We are the owners of the GUSS’ PICKLES trademark. Opening this fall at 445 Gold Street, Brooklyn, New York at the brand new Dekalb Market Hall located at City Point, downtown Brooklyn. A state of the art original out of the barrel Lower East Side pickle store. Watch for this grand opening and taste the best pickles on the planet. Andrew N. Leibowitz C P M ( Chief Pickle Maven )

[…] Long story short, in the 2000s, there was controversy over who owned the name and recipes from famed pickle producer Guss’, along with LES pickle territorial disputes. The New York Post wrote of the Great Pickle Wars, “This tale of betrayal, madness, jealousy, and rage makes ‘King Lear’ sound like a child’s bedtime story.” To learn more about this part of pickle history, read The Bowery Boys’ Take on This Pickle Civil War. […]