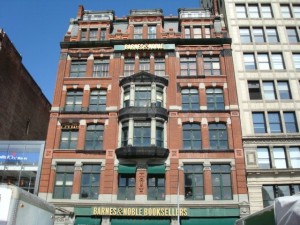 Say what you will about Barnes and Noble. They’ve destroyed the small bookstore. They’ve homogenized the reading experience. Kelly green makes you nauseous.

But at least they have great taste in buildings.

Its namesake tenant was the popular literary journal Century Magazine. Publishing illustrated short stories, it was briefly edited by Frank Crowninshield, later editor of Vanity Fair and an inaugural board member for the Museum of Modern Art. Look here to go back and read some 19th century back issues.

It was also home to a variety of other offices, include that of architect George B. Post. In 1907, a prominent Armenian exporter of Oriental rugs was shot and killed on the front steps while on his way to his office in the building. My favorite part about the report in the New York Times: the man died in the arms of a “toe dancer named Trixie Jennery.”

Landmarked in 1986, the Century Building sat around virtually unused during much of the late 80s and early 90s, used basically as storage for the ABC Carpet emporium around the corner. The owner of the building for many years, a scrappy soul named Lillian Seril, seemed content to literally let it sit unused rather that have it chopped up into retail units. “I’ve always protected that building. I’ve refused to let it be pushed and pulled.”

It’s in this light that Barnes and Noble’s moved into the building should be applauded. They moved there in the mid-90s, refurbishing the exterior and many of the interior ornamentations to their original lustre. Sure, florescent lighting and a Starbucks coffee may not seem like architectural improvements, but overall they managed to save one of Union Square’s true treasures.