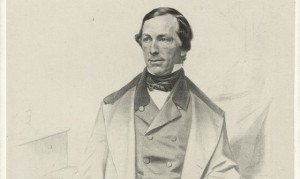 And now we come to one of New York’s most notorious, absolutely in the top 10% of the most corrupt mayors ever in our fair city — Fernando Wood. He was the first mayor ever to be forcibly dragged from City Hall and arrested. Even then, he was elected more than once, was seen at one point as a savior, and even received the unanimous votes of New York City’s dead constituents. We also have him to thank for one of New York’s most treasured landmarks.

The Philadelphia-born Wood had distinguished himself as a former merchant and then as a member of Congress from 1841-43. His meteoric rise came through the assistance of Tammany Society, the frequently corrupt Democratic machine which all but dominated New York politics. By 1855, the year Tammany placed Wood in the mayoral seat, the Society was at the height of their control.

During his first term, 1855â€“1858, he was initially seen as a moral reformer, who “closed saloons on Sunday, suppressed brothels, gambling houses and rowdism, [and] had the streets cleaned” according to Tammany historian Gustavus Myers.

But these tokens of fortitude were a facade to extort support from those very vice industries. By 1856, he abolished the Sunday saloon restriction in exchange for their support. The Municipal Police Force under Wood became corroded with graft and bribery, at times more fearful than the crime they were purportedly there to eliminate.

So it should come as no surprise that even nativist gangs like the Dead Rabbits were soon under Wood’s control, ensuring ‘fair’ elections — fair for Wood, that is — by destroying ballot boxes, tossing others into the river and even tallying votes from lists of voters in cemeteries. It helped that rival gangs like the Bowery Boys (the gang, not us) were in the pockets of the Republicans. 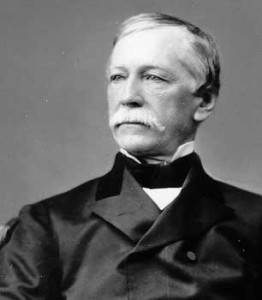 Fed up with New York’s culture of corrupt law enforcement, in 1857 the state legislature formed a rival police force the Metropolitan Police Force. Wood’s Municipal force, fat from its complex institution of graft that essentially left crime to fester unabated, were not interested in stepping aside, nor did Wood relinquish his power to the Republican-controlled state. When Albany-appointed State Commissioner Daniel Conover arrived at City Hall, Wood promptly threw him out. (Wood had hired his own state commissioner, Charles Devlin, who bought the position for $50,000.)

Conover returned with the Metropolitan police force and a warrant for Wood’s arrest. Wood’s Municipal men were waiting, and when the captain grabbed Wood and began dragging him from City Hall, the Municipal men pounced.

Soon Metropolitan police were battling Municipal men, a surreal conflict now known as the Police Riots of 1857. With the assistance of the National Guard, Wood was briefly arrested. The Metropolitans eventually disbanded, but not before a chaotic summer of two rival police forces, cancelling each others arrests and raiding each other jails. Ah, it was a great time to be a knife-wielding gang member. *sigh*

Disagreements with Tammany left Wood without his primary backers and out of office in 1858. (Industrialist Daniel Tiemann was mayor from then until 1860.) But under the aegis of a new political machine, called Mozart Hall, he swept back into office for another two year term. 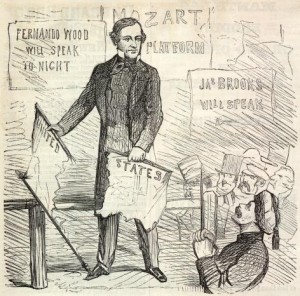 This time, his allegiances took on a Confederate tenor. A sympathizer with the Southern cause, especially as New York’s profits as a port city were tied closely to Southern plantations, Wood suggested that New York City secede with the South. In his official recommendation, he proclaims, “Amid the gloom which the present and prospective condition of things must cast over the country, New York, as a Free City, may shed the only light and hope of a future reconstruction of our once blessed Confederacy.”

“With our aggrieved brethren of the Slave States, we have friendly relations and a common sympathy,” he remarked, in statements made January 6, 1961.

He also had a prescient idea for all the wrong reasons — to merge Manhattan, Staten Island and Long Island into a new independent commonwealth, known as the Free City of Tri-Insula. Had Wood gotten his way — and his plan was greeted warmly by the corrupt Common Council — the city might have joined the South. Less than forty years later, of course, similar consolidation plans (with less anarchic pretentions) prevailed.

Unfortunately for his grandiose schemes, the Civil War erupted in April of that year at Fort Sumter and a huge outpouring of support in New York soon swept Wood’s ideas into obscurity. In fact, being a crafty politician, he was soon organizing troops for the Union cause, the eventual result of which would soon lead to New York’s draft riots in 1863.

By then, however, Wood was out of the mayoral office and onto other pastures — namely the U.S. House of Representatives. How this man could have been elected with his track record is personally beyond me, but thus is the way of the New York political machine.

He did, however, leave us with one lasting mark on the city — the present-day location of Central Park.

The location of CP is a great positive contribution to NYC. There has to be more to THAT story than one sentence. You have a lot to say about his negatives.

The location of CP was Seneca Village, a village of freed African Americans that he kicked out in order to build the park to fit the needs of the upper class.. so you’re right, there is more on THAT story.

1) Fernando Wood is either our finest mayor ever, or in the top three. Debate and discuss.

2) The Union League propagandists still describe Wood as somehow “shady” or “corrupt”—as though he was taking bribes or running opium dens. Actually the era of corrupt municipal government happened afterwards: during the Reconstruction Era (Boss Tweed, Grant Administration, stolen election of 1876, etc.). Why do you suppose the Union League propagandists still describe Fernando Wood as “shady” or “corrupt”?

I was reading “Law & Disorder: the chaotic birth of the NYPD” when it got to the part of Wood. The description of him resonated with me as being so very much like Donald Trump, I couldn’t help wondering if Trump had taken lessons from Wood’s way of life. Both believed “only I” can do the job right among other points. The similarities are scary.